In 2014, Ayman al-Zawahiri, the successor of Osama bin Laden, released a video saying he had set up an organisation called Al Qaeda in the Indian Subcontinent (AQIS). In India, he said, the modules were active in West Bengal and Assam.

Six years later, on September 19 this year, the National Investigation Agency arrested nine suspected Al Qaeda operatives from Bengal and Kerala. All nine were from Murshidabad, which borders Bangladesh and is one of the more backward districts in the country. Intelligence agencies have found AQIS modules in Murshidabad, and have traced several others to Malda and Uttar Dinajpur.

Sources told THE WEEK that, in August, the NIA came to know about several meetings between groups operating in Murshidabad and Ernakulam, Kerala. Acting on a tipoff, the agency started snooping; it used its IT cell to trace phone calls and WhatsApp video calls between suspects. The NIA also used the Border Security Force’s South Bengal Frontier to collect details about the nine. While six of them lived in Murshidabad, three were labourers in Kerala. The group is headed by Murshid Hasan, who was working as a cook in Ernakulam.

According to the NIA, the accused were plotting a “major bloodletting” in Delhi and other parts of India. The agency had recovered country-made firearms and a few conventional explosives (no IEDs) from the men.
An NIA source said that the AQIS planned to attack some BJP leaders, including Dilip Ghosh in Bengal.

The NIA apparently got to the nine men after it arrested Tania Parveen, a college student, from Baduria in the North 24 Parganas district of Bengal in March. According to the agency, Parveen had links with Lashkar-e-Taiba.

After interrogating the nine accused on September 25, the NIA made another arrest—Shamim Ansari from Jalangi in Murshidabad. He reportedly used to make trips to Kerala as a labourer.

The investigation has revealed that the accused are linked with Ansar Ghazwat-ul-Hind, which is the AQIS cell in Jammu and Kashmir. Notably, the Director General of the Jammu and Kashmir Police had said that Ansar Ghazwat-ul-Hind, which reportedly also operates from Pakistan, had been wiped out from Kashmir after its head, Zakir Musa, was killed in 2019.

It is surprising that Bengal-based outfits, which usually look to Bangladesh for inspiration, have allegedly developed links with Pakistan-based groups. NIA sources said that some of the accused had visited Srinagar and other areas in Kashmir as labourers. Interestingly, after the removal of Article 370 last year, Kashmir-based Pakistan militants had killed five labourers from Murshidabad. This raises the question—why would labourers from Murshidabad have been in contact with the militants who killed their own people? Could there be a quid-pro-quo arrangement?

If the Bengal-Kashmir link is proven, it would mean that Pakistan has widened its network of terror beyond Kashmir and Mumbai.

But does that rule out a Bangladesh connection? “We are investigating it. So far, the NIA has not touched the issue,” said a Kolkata Police Special Branch officer. Both the special branch and the West Bengal CID have interrogated the men.

If needed, said NIA sources, they would question the accused on possible links to the 2014 Burdwan blast, which the agency is still investigating. The NIA would check if the Jamaat-ul-Mujahideen of Bangladesh modules in Bengal—which were uncovered after the Burdwan blast—had built up AQIS modules, too. 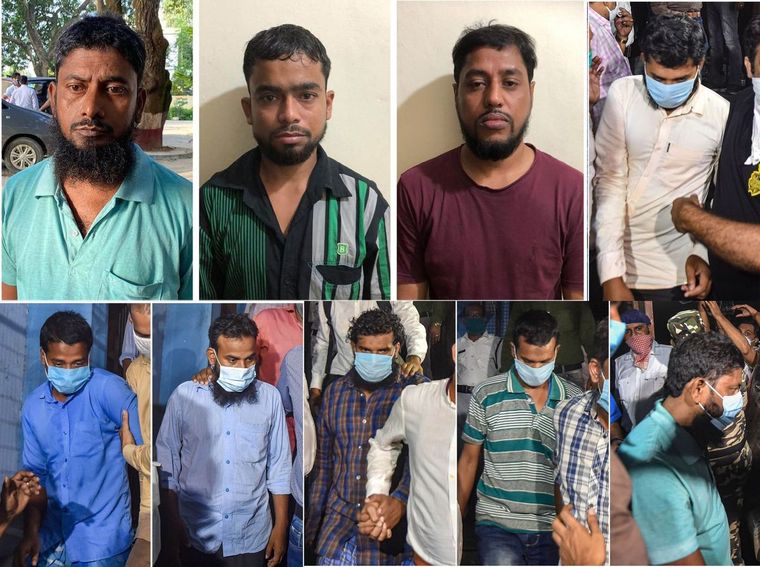 In the dock: The nine men the NIA arrested on September 19 | PTI

Another worrying fact for investigators is the link to Kerala. The men from Murshidabad are not part of the module that sent Islamic State recruits to Syria, which raises several other questions. The NIA is investigating whom the three arrested from Kerala were in touch with.

The agency has found several Al Qaeda-related documents on the nine men, as well as a blueprint for launching attacks throughout India. The accused are reportedly tech-savvy; three of them are college students, including one who is an aspirant engineer. They apparently used the deep web to connect with people across India. “Interestingly, all the devices—laptops and smartphones—were locked using biometrics, but they could not be opened with the men’s fingers,” said an investigating officer. “So, some foreign body (or some other person) might have been used to open the devices.”

Through the deep web, they used to interact with their “partners in crime” on video and voice calls. The NIA has also found some WhatsApp groups the men had formed. One of them is called ‘Quateel for Islam’; quateel means killer in Arabic.

The arrests have predictably become a political issue. “Bengal and Kerala have become dens for terrorists as governments in both states have no eagerness to crush the menace,” said Dilip Ghosh.

Governor Jagdeep Dhankhar lashed out at the police. After Bengal Director General of Police Virendra wrote to the NIA, asking why the state police were not kept in the loop before the arrests, Dhankhar said, “The director general is burying his head in the sand like an ostrich. The state is a safe haven for terror, crime and illegal bomb-making competitions, which results in atrocities and violation of human rights.”

Partha Chatterjee, state education minister and Trinamool Congress secretary general, said: “The matter is under investigation, no one should play politics.”

During the interrogation, the NIA also found that some madrassa authorities were in touch with six of the men. This had apparently happened during the Burdwan blast case, too. “I would ask NIA officers to stay a few days in madrassas here,” Md Yahiya, chairman of Bengal Imams’ Association, told THE WEEK. “They would see what nationalism is all about. We create good humans in madrassas, not rapists or crime lords.”

Bandi Mukti Committee, a human rights organisation that had given legal aid to the Burdwan blast accused, said it would send a fact-finding team to the villages from where the men were arrested. “In the past 123 terror cases in India, the accused walked free in 99 cases,” said BMC state secretary Choton Das. “In many cases, the Supreme Court threw out the charge-sheet.”