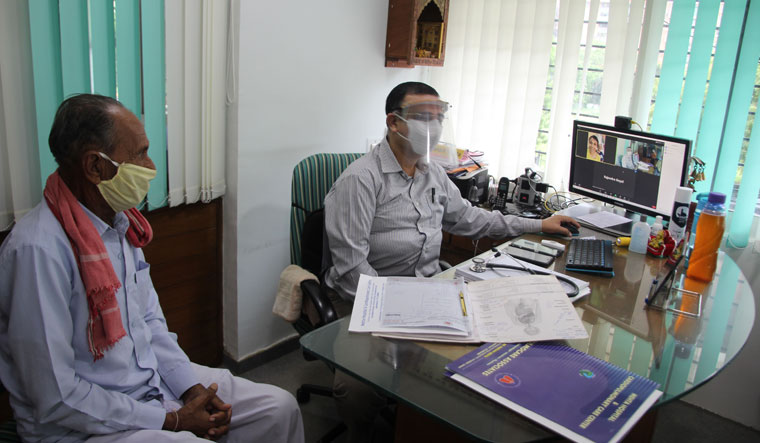 In June, Chetan Raval from Ahmedabad was running a fever a shade under 100°F for about four days. The 59-year-old runs a business and is active in several social organisations, so he regularly comes in contact with different people. He thought it prudent to get tested for Covid-19. He tested positive. He immediately called up his doctor to ask which hospital he should get admitted to. Dr Parthiv Mehta, a pulmonologist, asked Raval to stay at home. Raval, a Congress leader, then checked with his wife and daughter. “I told them that if they were afraid of contracting the virus, I can get admitted in a hospital,” said Raval. But they both insisted that he stay at home.

Raval’s is not a solitary case. Getting treated at home for Covid-19 has become a norm in Ahmedabad, one of the worst Covid-19 affected cities in the country. Out of about 72,000 cases in Gujarat and 2,670 deaths as on August 11, Ahmedabad has accounted for over 28,000 cases and 1,630 deaths.

According to sources, a few thousand have recovered after being treated at home, and even more are still under treatment. These patients are being treated by private practitioners and the Ahmedabad municipal corporation’s (AMC) Ghar Seva: Sanjivani teams.

Treating a particular patient depends on the risk factors involved like whether the patient has comorbidities, Mehta told THE WEEK. It is also important to know the proximity of a hospital to a patient’s home, in case hospitalisation is required. Equally important is the cooperation of the patient and family members. Being admitted in a hospital can be depressing for a patient, and more so when doctors and paramedics are in PPE. Hence, being at home is relaxing for the patient and the family gets real-time feedback.

“Whenever I needed to speak to Chetan, I would call him [on the phone] or go to his room and stand at a distance, wearing a mask. He, too, would wear a mask,” said Diana, Raval’s wife. Life for Raval was otherwise normal as he exercised, drank plenty of fluids and even did some indoor chores. At his home, the house help continued to come but took precautions.

Doctors put on PPE just before entering the patient’s home and remove it when leaving, said Dr Raj Rawal, critical care expert, whose team provides home treatment for Covid-19 patients under the aegis of Care Associates. The family then calls the AMC and the kit is disposed of. Consultations are also done through Zoom and WhatsApp calls. The patients are required to share their blood work and other reports, including X-rays regularly.

It is also important for doctors to deal with patients carefully as they often battle anxiety. Deval Gandhi said she nearly cried when her husband, Devanshu, managing director of popular ice cream brand Vadilal, and their two daughters tested positive within a week of her doing so. “The way Dr Mehta handled us is commendable,” said Deval, adding that he was also strict with them.

According to one estimate, more than 25 teams of doctors and private practitioners have been providing health services to patients at home in Ahmedabad since late March. These doctors have also been treating patients outside Gujarat. Rajendra Prasad Goyal, superintendent of police in the criminal investigation department in Udaipur, Rajasthan, and his 27-year-old daughter Arushi were also Mehta’s patients. Under his guidance, their quarantine period began on August 3. The father and daughter had shifted to another home while the mother and son, who had tested negative, stayed in their apartment. 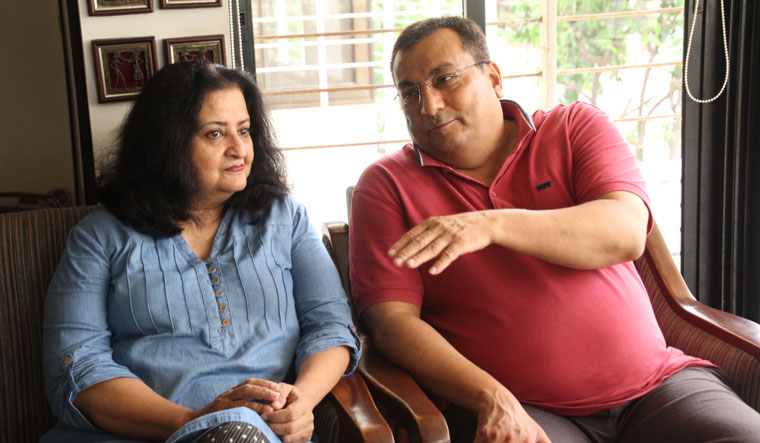 Chetan Raval, who got treated at home, with wife, Diana | Janak Patel

“Our daughter had a mild fever and some throat irritation for about four to five days,” said Goyal. “After she tested positive, all of us, including our 11-member staff, took the test. Except me, all tested negative.” Goyal has no symptoms and Arushi’s symptoms have gone. The father and daughter now spend quality time together.

Remaining in quarantine may sound simple, but that was not the case with S.P. Adeshara’s family back in Ahmedabad. At the residence of this former food and drugs commissioner, he and six others tested positive. Only Meenaben, his wife, tested negative. “It was difficult. Either all seven had to get admitted to a hospital or get quarantined at home,” he said. After consulting Rawal, it was decided that the family would be treated at home. So, while all members who tested positive would move around freely in the house, Meenaben was isolated in one room.

Their cook would bring lunch and dinner for all of them in eight different parcels. However, they did face medical issues. Adeshara’s son developed a lung infection, and they were prepared to move him to a hospital. The antibiotics, however, worked and gradually the infection subsided.

Rawal said that in April they used to get about 100 calls a day with requests for hospital beds and so they started home service. “In fact, the AMC even pulled us up for it,” he said. “We later wrote to them that it reduces the burden on the hospitals, and that people who require aggressive treatments will get the beds.”

The home care service started by the AMC is more than a month old now. Municipal Commissioner Mukesh Kumar said the civic body has been following ICMR guidelines. What began as a handful of paramedical teams visiting those under home care, has now expanded to 184 teams. The teams visit the patients daily or on alternate days to check on them. If need be, even a physician visits them.

The doctors are able to judge when the breathlessness could occur or increase, said Dr Ajay Jain, a pulmonologist who treats patients at home through e-consultation. According to him, when tested positive, it is all about isolating oneself, washing your own utensils and keeping a distance from family members.