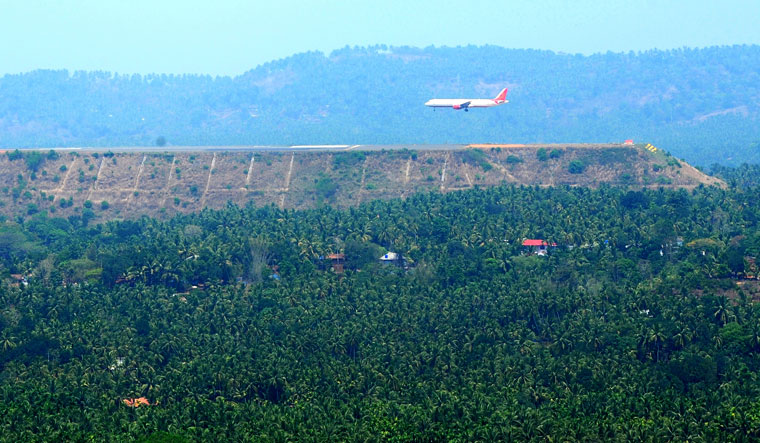 Test of precision: A flight landing at the tabletop runway at the Kozhikode airport | Sameer A. Hameed

In a report on the IX812 crash which took place at the Mangalore International Airport in 2010, Air Marshal (retired) B.N. Gokhale, who headed the court of inquiry, specifically mentioned the hazards of tabletop runways. They require extra skill and caution during flight operation, and the risk of overshooting or undershooting can lead to grave situations, noted the former vice chief of the Air Force, who was a Sukhoi pilot. The IX812 crash had 158 fatalities.

A ‘tabletop runway’ is one located on top of a plateau or hill with one or both ends stopping short of a precipice. Like Mangaluru, the Kozhikode Calicut International Airport in Karipur, Kerala, also has a tabletop runway, and experts are pointing fingers at it for the IX1344 crash of August 7. The Air India Express flight, a Boeing 737-800, overran the runway, skidded off at the end, slid down 35ft and broke into two. Eighteen people, including both pilots, were killed.

The experts, however, are asking for the Swiss Cheese Model aviation disaster probe mechanism before coming to any conclusion on the crash. The model illustrates that, although many layers of defence lie in between hazards and accidents, there are flaws in each layer (like holes in a wedge of Swiss cheese) that, if aligned, can allow an accident to occur.

“Accidents are often caused by the confluence of multiple factors, ranging from unsafe individual acts (human error) to organisational errors, including that of the regulator,” said Captain Mohan Ranganathan, member of a safety advisory committee constituted by the ministry of civil aviation. “In India, all the previous layers (of cheese) are removed and we only see the final layer (the pilot).”

The pilot of the IX1344 seems to have committed exactly the same error that caused the accident in Mangaluru. “And if it is the same airline and the same error has occurred, it points to a very serious deficiency in aviation regulation,” said Ranganathan.

The Directorate General of Civil Aviation, India’s aviation regulator, has blamed the weather, saying that it was raining heavily when the flight from Dubai tried to touch down. The flight was supposed to land on runway 28, but due to low visibility it landed on runway 10, which is said to have had tailwinds. The wind is likely to have accelerated the flight, making it impossible for the pilots to stop it.

Kozhikode is one of the 11 airports that were named as critical after the Mangaluru crash. Leh, Kullu, Shimla, Port Blair, Agartala, Lengpui, Jammu, Patna and Latur are the others.

Gokhale, however, is of the opinion that there is not much to worry about tabletops if rigid safety norms are followed. He maintains that pilots should get special clearance from the regulator to land on such runways. “Besides pilots, we must look into safety issues, including friction test. In case of rain, rubber marks need to be removed quickly as they affect brakes. Friction test and rubber removal are critical on short runways,” he noted. He also recommended avoiding the downward slope in the overshoot area and a ground arresting system similar to those in IAF airfields.

Ranganathan, who specialises in wet runway operations, is surprised that authorities allowed flight operations in Kozhikode airport during heavy rains. He said both ends of the runway had heavy rubber deposits that would result in friction being well below normal in wet conditions. There is also a marked downslope after the first third of runway 10. “These are all detrimental to safe landing,” he said. “When pilots feel that they experience poor braking due to heavy rubber deposits on the runway, there is a tendency to touch down early.” In fact, Ranganathan had even submitted images to the aviation authorities showing landings made well short of the aiming point on runway 10 at Kozhikode.

Director General of Civil Aviation Arun Kumar jumped the gun by saying it looked like “a bad judgment call by the pilot”, harping on the point that the aircraft made a late touchdown. Indian Commercial Pilot Association has objected to his statement and demanded that Minister for Civil Aviation Hardeep Singh Puri remove him. In the early days, the directorate was headed by aviation professionals. Of late, however, it is mostly IAS officers. 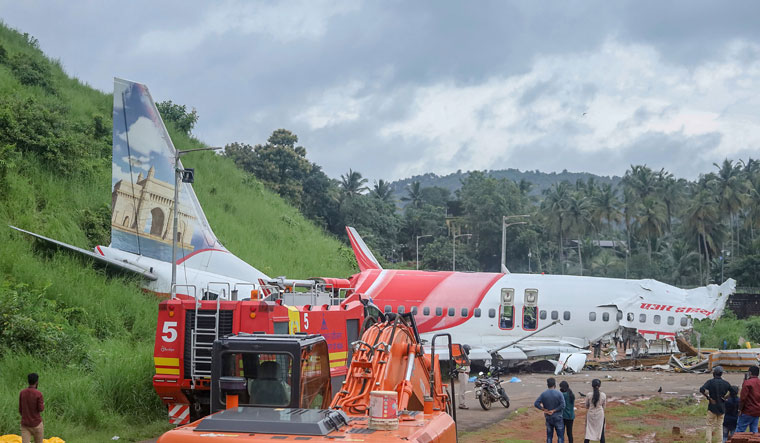 A senior Air India pilot told THE WEEK that Mangaluru and Kozhikode airports were particularly tricky as the margin of error for the pilots was very low. “They lack the right kind of lighting required on the runway and the weather makes it worse. The rain is blinding during the night and it is like making a black hole approach,” he said. Captain Deepak Vasant Sathe, the commander of the ill-fated flight in Kozhikode, was a highly decorated veteran of the Indian Air Force.

Sudden changes in wind pattern on approach is a common phenomenon on tabletop runways. “It makes the approach management difficult,” said another pilot, adding that monsoon conditions make it a lot more difficult. And, it does not help that at times pilots are entirely dependent on instrument indications that might suddenly change when the transition to the tabletop happens. “For example, the radio altimeter, which shows the height of the aircraft, may show 500ft, and a second later it may show 100ft because you have entered the table zone,” he said.

In a communication to K.N. Srivastava, chairman of Civil Aviation Safety Advisory Council, Ranganathan had pointed out that Kozhikode had been classified as Code 4E to accommodate wide-body aircraft in violation of International Civil Aviation Organization standards. “The DGCA and the Airport Authority of India are aware of this and this has been documented in detail by Arun Rao, member of Aerodromes Group-CASAC and a former ICAO head. All these reports have been ignored,” he said.

Kozhikode and Mangaluru airports have only 75m on either side of runway when the mandatory requirement is 155m. This, however, could have been mitigated by taking extra safety features, said aviation experts. “This (Kozhikode) was an accident waiting to happen,” said Ranganathan. “They manipulated the rules to allow wide-body aircraft to operate.”

V.P. Agarwal, former chairman of AAI, said there was no procedural error but admitted that in 2017, under pressure from the local community, wide-body aircraft was allowed to operate from Kozhikode with ‘load penalty’ (with fewer passengers than the capacity). “As load penalty operation is uneconomical for both airlines as well as passengers, efforts were made to allow full load operation by extending the length of the runway,” he said. A request to acquire additional land was made to the state government.

The construction cost of tabletop runways is much higher compared with regular ones. “The cost of making a tabletop runway is similar to constructing a full airport at any other place,” said Agarwal. “While making the Gangtok airport, out of total expenditure of 0450 crore, the runway cost close to 0350 crore.” In Kozhikode, he said, the new land acquisition rule made the process cumbersome. It would have cost the AAI 0250 crore to extend 900ft of the runway. 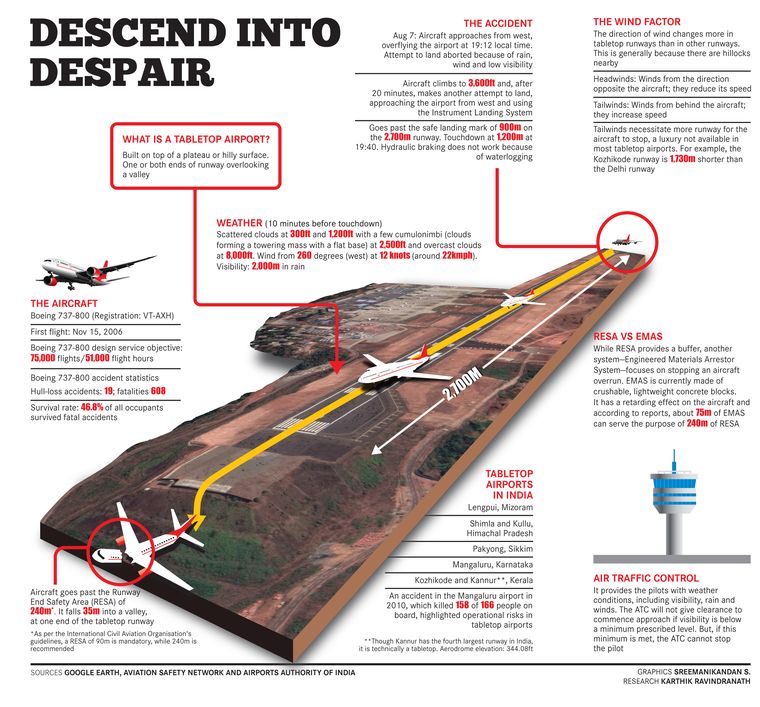 In 2019, a DGCA audit had found “various critical safety lapses”, including on the runway and the apron in Kozhikode. The AAI later responded that it had complied with all suggestions. Now experts are asking if the regulator had verified AAI’s claims. “I am not saying that the pilot did a perfect job. The pilot had made an error. But the contributory factor shows failure on part of the AAI and DGCA,” said Ranganathan.

Another concern is the narrow approach roads to tabletop runways. It came into light after the Mangaluru crash. “It was noticed and AAI procured rapid intervention vehicles to deal with such situations instead of crash tenders for faster mobility in narrow lanes,” said Agarwal. “In hilly terrains, it is not easy to expand roads. Such vehicles were stationed at Kozhikode and Mizoram airports as well.”

Ranganathan had predicted in a tweet in February that 2020 would be a year of a fatal accident for India. “It is happening every ten years. 1990, Bangalore A 320 crash of Indian Airlines; 2000, Patna crash of Alliance Air; 2010, Mangaluru crash.” It would make sense for the authorities not to wait for another 10 years to fix the holes the safety system.