Amit Shah is taking a swipe at the Kejriwal government 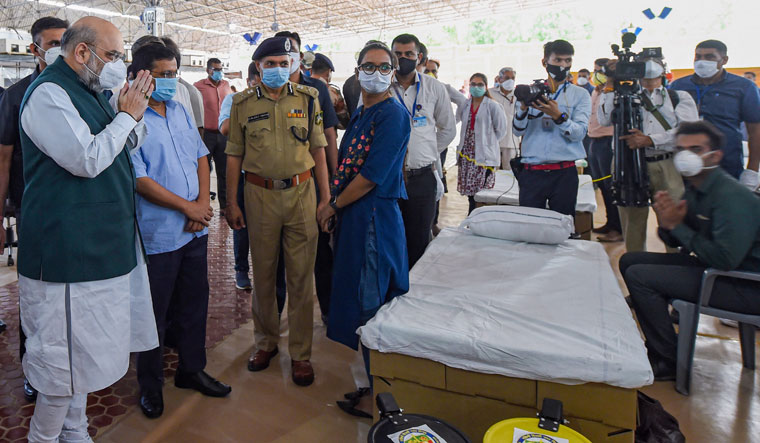 On June 27, Union Home Minister Amit Shah and Delhi Chief Minister Arvind Kejriwal together inspected a 10,000-bed makeshift hospital for Covid-19 patients that is coming up at the Radha Soami Satsang Beas campus on the outskirts of the capital. On the face of it, the two leaders were a picture of bonhomie. However, scratch the surface, and the political fault lines become evident. Even the run-up to the joint inspection had its share of obvious and not so obvious efforts to claim ownership of the initiative.

Kejriwal had tweeted to invite Shah for the inspection, and requested him to provide health care staff for it from the Indo-Tibetan Border Police Force and the Indian Army. Shah had promptly responded, reminding Kejriwal that it had already been decided at a meeting between them that doctors and nurses from the ITBPF would be deployed at the facility. He also spelt out details of when he expects it to be functional. Shah’s response was evidently aimed at giving the impression that he was in charge of the Covid-containment measures in the capital. On the other hand, Kejriwal wanted to convey the same, and also highlight that he was keen on the Centre’s collaboration.

Shah stepped into Delhi’s Covid-19 scene three months after the coronavirus arrived in the capital, at a time when the situation appeared to be getting out of control. There was a surge in the number of cases and the Kejriwal government was swamped with reports of people failing to get beds in hospitals and finding it difficult to get tested for the virus. Critics said the Aam Aadmi Party regime had slackened its testing and tracing efforts. And, the government’s decision to reserve Delhi’s hospitals for Delhiites was seen as a reflection of the city’s lack of capacity to deal with the disease.

Politically, it presented Shah with a great opportunity to emerge as Delhi’s saviour during an unprecedented health crisis and show the Kejriwal government in a bad light. Just a few months back, Shah had helmed the BJP’s campaign in the assembly polls in Delhi. In that contest, Kejriwal had comprehensively beaten Shah.

The Centre entered the scene after Lieutenant Governor Anil Baijal overturned the Kejriwal government’s decisions to reserve hospitals in the city for Delhi’s residents and narrow the criteria for testing. Shah’s first high-level meeting involving Delhi’s stakeholders, including Baijal and Kejriwal, was on June 14, when a slew of measures were announced, primarily with regard to increasing testing, enhancing the number of beds and intensifying tracing, surveillance and containment efforts, and putting a cap on testing and hospitalisation rates.

Shah has since then been actively involved. His surprise visit to the Delhi government-run Lok Nayak Jai Prakash Hospital, a prime Covid-19 facility, was broadcast live on his YouTube channel. The home ministry has been regularly putting out releases regarding the progress made in Delhi.

However, the politics behind Shah’s initiatives was clear as BJP leaders responded to his visit to LNJP Hospital by asking how many times Kejriwal had visited the hospital. It was apparent that the choice of the hospital was guided by political considerations. The Supreme Court had, taking suo motu cognisance of media reports, said patients were being kept in horrific conditions in the hospital. Delhi’s BJP MPs were despatched to the antigen testing centres in the city to emphasise upon the BJP’s imprint on the enhanced testing.

For AAP’s political opponents, the Covid-19 crisis is an opportunity to question its claims of having improved the health care infrastructure in Delhi. Shah expressed it in a TV interview: “I am not running Delhi. Let us not use such words.... Arvind Kejriwal is always kept in the loop. He is also involved in decision making. Some political statements may have been made, but no impact on decision making.... [Delhi’s Deputy Chief Minister Manish] Sisodia’s statement [that Delhi will have 5.5 lakh cases by July end] had created some panic. That is not going to happen.”

Delhi Congress President Anil Chaudhary said the AAP’s claims on improving the health care infrastructure in the capital stands exposed, and while the Kejriwal government indulges in a blame game with the Centre, the people are suffering. Kejriwal, on the other hand, is playing a balancing act; he is aware that his government needs the Centre’s help in handling the pandemic. “The chief minister believes that the fight against Covid-19 is a massive one, and no one person or agency can deal with the disease on its own,” said Sisodia. “It is with this sentiment that he wants to take everyone along, and he is finding success in his efforts. We can see that the situation is now stabilising.”

However, the unease in the AAP with Shah’s growing involvement in Delhi’s affairs has shown through in its comparison between the BJP government erecting a statue of Sardar Vallabhbhai Patel and the Kejriwal regime naming the 10,000-bed makeshift hospital after the country’s first home minister. The AAP leaders have called the Baijal’s order on compulsory institutional isolation of Covid-19 patients the “Shah model”, as against the “Kejriwal model” of allowing home isolation for asymptomatic and mild cases. The assessment within the AAP is that the Delhi government gave the Centre an opportunity to rush in. For the time being, Kejriwal and his party have opted to grin and bear it as Shah has his sweet revenge.