Mumbai struggles to cope with the rise in Covid-19 cases 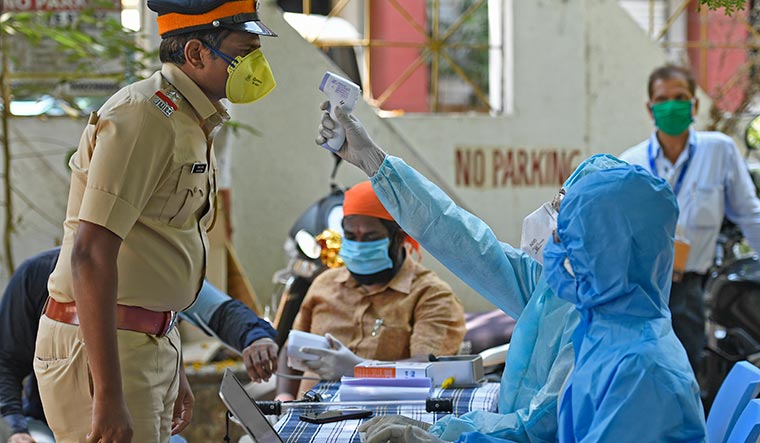 ON THE EVENING of May 23, a family from Mumbai’s suburban Andheri ran from one end of the city to the other to find a hospital bed for a 58-year-old who complained of increasing breathlessness. They visited five hospitals, but were told that no beds were available in the critical care unit. Finally, in the wee hours of the morning, they managed to admit the patient in the general ward of a dedicated Covid-19 hospital. The patient was diagnosed with pneumonia, but the oxygen support came too late. He died at around 6.30am.

This is not an isolated case. As of May 26, Covid-19 cases in Maharashtra have crossed the 50,000 mark. Mumbai alone has more than 30,000 cases. The city is struggling to cope with the surge in cases. Its hospitals are stretched to capacity and there is an acute shortage of beds, especially in the ICUs. Frontline health workers are facing emotional and physical exhaustion. Dead bodies are left behind in wards for hours on end, and ambulances take hours to reach critical patients. And, there are lapses, like the one recounted by Malini Shinde (name changed), a resident of Prabhadevi. Her neighbour tested positive and was hospitalised, but none of his close contacts were approached by the Brihanmumbai Municipal Corporation (BMC) nor were they quarantined.

Dr Anant Bhan, a public health expert, said that the rise in cases indicated that the control efforts had limitations, and that the existing spread in the community, especially in densely populated urban clusters, could have been averted by “more proactive and expanded testing early on, and by developing strategies that responded to the unique challenges of a metropolis like Mumbai.” Also, monsoon will bring additional health challenges, like dengue, malaria and leptospirosis, he said. “Health professionals are also in short supply and this could be a major issue in mounting an effective response,” said Bhan. In Mumbai alone, 300 medical workers have tested positive for Covid-19.

Likewise, more than 700 policemen in Mumbai and close to 2,000 in the state have tested positive for Covid-19; 18 of them have died across the state. Forty-four policemen from JJ Marg police station, located inside the compound of JJ Hospital in Mumbai, are under treatment for Covid-19, while five others are in quarantine. Assistant Commissioner of Police Avinash Dharmadhikari, who is in charge of the Dongri division, said that the virus could have spread because of the common route shared by patients visiting the hospital and the policemen. “We have now locked the gate that gives access to patients and hospital staff from our side of the compound,” he said.

But Assistant Commissioner of Police Santosh Walake, who heads the Azad Maidan division that includes posh areas of South Mumbai like Cuffe Parade and Colaba, said that the rise in cases among cops was because they were “forgetting to police themselves, rather care for themselves”. “Also, given that the infection spreads fast, a number of police officers may have contracted the disease while working with their colleagues who first tested positive,” said Walake. “We are supposed to get tested only once the symptoms begin to show. I think that also contributes in infection transmission.”

What has health experts worried is that the virus, which was earlier limited to a few civic wards like G South that includes Dharavi, Asia’s biggest slum, has now spread to other densely populated areas. Eighty-six per cent of the cases now being reported are from these areas. According to officials, eight wards have a case growth rate of more than eight per cent. N ward (Ghatkopar) has the highest—13.7 per cent—followed by T ward (Mulund) and P North (Malad)—11.9 per cent. G South, which had the highest growth rate a month ago, has the lowest—3.4 per cent.

The Municipal Corporation of Greater Mumbai has now divided its 24 wards into seven zones, each headed by an IAS officer. Prajakta Lavangare, who is in charge of Zone V that covers Deonar, Chembur, Kurla and nearby areas, said that they are doing “aggressive house-to-house surveys” in the new hotspots. “We are proactively testing and tracing people. That is why the numbers are high,” she said. “We will proactively find high-risk contacts, at least ten people per patient, and break the chain of infection.”

Even as the numbers rise, there is an acute shortage of hospital beds. While there are 73,000 hospital beds in the city, the number of ICU beds is limited. As per a civic official, around 20 per cent of patients require ICU care and five per cent critical care. “There is shortage in critical care because many patients want to go to major hospitals and not the peripheral ones,” said a doctor at Nair hospital, which is the biggest government facility for Covid-19 patients in Mumbai. “Patients are not seeking treatment on time, but only when they feel very ill. And, people are coming in with raised anxiety levels.”

Recently, BMC took over 80 per cent of beds in private hospitals to treat Covid-19 patients. Additionally, ‘jumbo facilities’ like the National Sports Club of India Dome are being converted into special observation units, with at least 10,000 beds added. Fifty per cent of these will have oxygen points and 10 per cent will be reserved for Covid-19 patients who need dialysis. St Xavier’s College is readying its hall and canteen foyer to accommodate beds for Covid-19 patients. The BMC, under new municipal commissioner Iqbal Chahal, has set up a live dashboard on the availability of beds. All the patient has to do is dial 1916 to get the information. The BMC is also looking at turning buses and school vans into ambulances to increase its fleet.

But, would all this be enough?