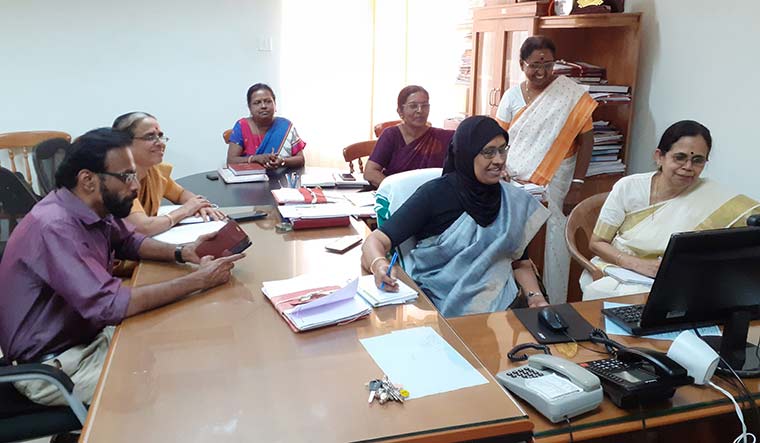 Team spirit: Director of Medical Education Dr Remla Beevi A. (centre) with members of the Covid Cell, which monitors all activities in Kerala’s nine medical colleges.

THE GUARDIAN newspaper recently called Kerala Health Minister K.K. Shailaja the “coronavirus slayer” for “saving” the state from Covid-19. The interviewer, Laura Spinney, who has written a well-received book on how the Spanish Flu changed the world, referred to Shailaja as a “rock star”. As the story went viral across the world, Shailaja Teacher, as she is popularly known, managed to visit her home in Kannur for a day. She was meeting her husband and children for the first time in three months.

Shailaja is leading thousands of women who are fighting the virus in various capacities. Kerala’s Covid-19 story, which is an ideal case of humanitarian politics, is also the story of its unleashed women power. Dr B. Iqbal, who chairs the expert committee on Covid-19 that advises the state government, told THE WEEK that this is a unique aspect of Kerala’s successful resistance against the virus. “From our health minister to the ASHA workers (accredited social health activists) on the ground, they are the frontal warriors in this fight,” he said.

Apart from the health minister, both the director of health services (DHS) and the director of medical education (DME) are women. Out of 14 district medical officers (DMOs) in the state, 11 are women. Female doctors in the state health services outnumber the men (65:35) and this has been the trend for nearly two decades. Similarly, the number of female medical students in the state is more than double the number of male students. When it comes to nurses and paramedics, there is total domination by women. All of them have joined hands in the fight against Covid-19.

“We are the ‘penpada’ (women army) of the state government,” said DME Dr Remla Beevi A. “What we are seeing is the display of women power in its best form.” She heads the Covid Cell that monitors and guides all activities in the state’s nine government medical colleges. All the members in the Covid Cell, barring one, are women.

DHS Dr Saritha R.L., who did an exemplary job in fighting the 2018 Nipah outbreak, has followed that up with the fight against Covid-19. “It has been a tough ride,” said Saritha, who has not visited her family in Kozhikode for three months. “But what I am doing is my duty as a doctor and as DHS. I do not think about my gender while taking up responsibilities.”

There are many like Saritha who forget everything else when it comes to duty. Dr Kamala Rammohan is one such person. She was the lone woman member in the medical team from Government Medical College, Thiruvananthapuram, that was sent to Kasaragod district, which, at one point, had the highest number of Covid-19 cases in the country. That team helped contain the spread in Kasaragod. Dr Asha Vijayan of General Hospital, Muvattupuzha, has also had to prioritise the call of her profession over her personal life. “I have not seen my daughters for weeks together,” said Dr Vijayan. “They have gone to their grandparents as I have Covid-19 duty. As a doctor, I am very clear about my priorities.”

The selfless service of doctors like Saritha and Asha has been instrumental in keeping the death toll at just four, despite the fact that the state is highly prone to the virus spread because of the high proportion of people above 65 and the high population density. President of the Kerala Government Medical Officers Association (KGMOA) Dr Joseph Chacko acknowledges the state’s female-dominated health service but adds that many of them are hard- pressed because of family responsibilities. “Despite all the difficulties, they are doing a commendable job,” he said. 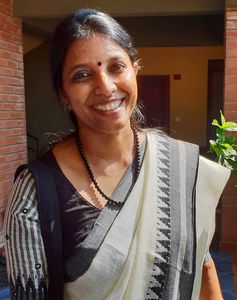 The gender factor becomes more prominent down the ladder. Thousands of nurses, junior health inspectors (JHIs), junior public health nurses (JPHNs) and ASHA workers are tied down by their gendered roles but are still putting up a brave fight. There are many instances of nurses and JPHNs who have stopped breastfeeding their babies ever since they were put on Covid-19 duty.

K.P. Divya, a nurse at the district hospital in Kasaragod, had to stay away for 28 days (14 days duty and 14 days quarantine) from her three-year-old son. “Whenever I missed my family during those 28 days, I used to video call them,” said Divya. “When my kids asked me why I was not coming home, I told them that I have keedanu (virus) on me. When I returned from quarantine, they were hesitant to come near me suspecting that the keedanu was still there. I did not know whether to laugh or cry.”

The JHIs, JPHNs and the ASHA workers, who are the eyes and ears of the system in the fight against Covid-19, are struggling with the sudden increase in workload. But these foot soldiers rarely overlook any detail. “I have rented a house near my place of work since February as I have been assigned the task of tracking the non-resident Keralites (NoRKs) coming from abroad,” said Preetha A.M., junior health inspector in Kozhikode. She leaves her seven-year-old daughter with neighbours and goes for duty. She is responsible for monitoring six wards in the municipality that has nearly 11,000 people. Her job has become tougher as the NoRKs have started returning to the state and she has to monitor them 24/7.

JPHNs and ASHA workers are dominated by women in other states, too. But the ones in Kerala have a unique story to tell because the state government has been effectively using them for surveillance. Also, it is an added advantage that most of them are well educated. “We know the localities inside out. Nobody comes in or goes out without getting noticed,” said Sajitha, who has been an ASHA worker in Kozhikode for 15 years. She is one of the more than 26,000 ASHA workers in the state who scan their areas like detectives, ensuring people follow lockdown and quarantine rules.

But there have been occasions when ASHA workers had to pay a price for their vigilance. Sajitha, for instance, was attacked by a group of youth when she asked them not to sit in groups during lockdown. Chief Minister Pinarayi Vijayan spoke out against disrespecting ASHA workers in one of his news conferences. “That was a great morale booster for ASHA workers like me,” said Sajitha.

Another set of women that has been a pillar in this trying time is the Kudumbashree, a self-help group of women. The government has been using 25 lakh active Kudumbashree members as “angels of communication” to promote the Break The Chain campaign. They were also responsible for running community kitchens across the state that ensured that no one went hungry during lockdown.

Equally important has been the role of women panchayat members, who account for nearly 60 per cent of the elected representatives in the state, another unique feature of Kerala. Every panchayat ward has a sanitation committee comprising the ward member, JPHN, anganwadi workers and ASHA workers, and these committees have been playing an effective role in containing the spread. In many wards, these committees are represented entirely by women.

“The access that a woman panchayat member has to a household is something a male member may not have,” said Thulasi Teacher, president of the Grama Panchayat Association. “While the male member may sit in the veranda and discuss things, a female member can walk straight into the kitchen and discuss issues. The success story of Kerala’s fight against Covid-19 is also the success story of the Kerala model with its empowered women and strong social indicators.”

Commenting on how this ‘feminisation’ has impacted the system, Dr Iqbal says that women are intrinsically more democratic and practical. “They are also good communicators. All these will have a positive effect on the system,” he said. “We have rarely seen women playing such a major role in protecting a state anywhere in the world. It is something unprecedented and unique,” said Dr A.K. Jayasree, nodal officer for Covid-19, Pariyaram Medical College in Kannur, which is one of the hotspots. Athira P.M., activist and lawyer, feels that it is a great thing that women have become “more visible” in Kerala society. “That the professional side of women is being acknowledged by society is indeed a great achievement. It needs to be properly documented,” she said.

For nurse Divya, this newfound acknowledgment is elating. “Everyone nods their head, showing care or respect, when I walk by,” she said. “It is for the first time that the contributions of nurses, JPHNs and ASHA workers are being recognised this way.” According to Dr Jayasree, what the state is witnessing is a historic moment. “Like in many other ways, Kerala’s unique experience with Covid-19 should be a turning point in the history of its women, too,” she said.