How we contained coronavirus in Rajasthan’s biggest hotspot 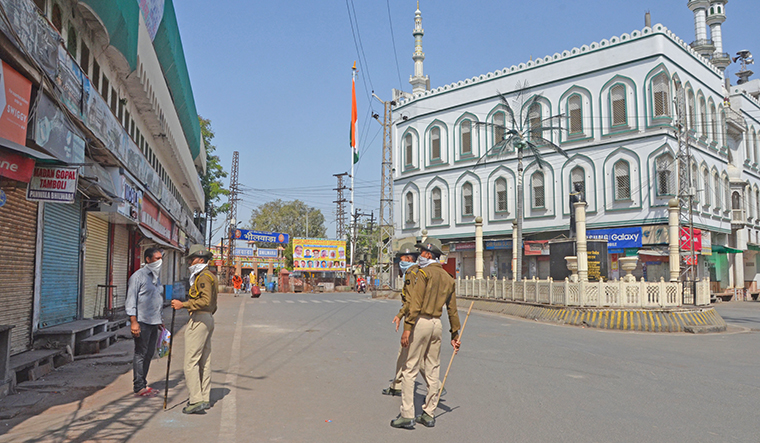 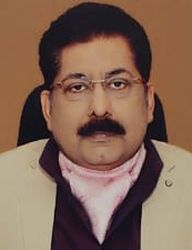 It has now been established that ruthless containment is the only way to beat Covid-19. On March 19, when six cases of Covid-19 were reported in Bhilwara district, we were left with no option but to declare a curfew.

There was a clear and present danger of Bhilwara entering the community transmission stage. The Brijesh Bangar Memorial Hospital in the city had become the epicentre of Covid-19 cases. Doctors and other health care workers had tested positive. The doctors had seen around 7,000 to 8,000 patients in the hospital, and possibly as many at their home clinics—and there was no record of the second set of patients. So, we estimated that at least 15,000 to 20,000 people had had direct contact with the hospital staff. If we had allowed people to move around and leave the district, we would have seen community transmission not only in Bhilwara, but also in other districts of Rajasthan and beyond state lines.

The borders of Bhilwara were sealed for private vehicles. Trains passed through, but did not stop in the district. Bus services were not allowed to function. Instructions were given to close all establishments employing more than 10 people. So, everything from industries to offices and brick kilns were shut down.

Initially, as the number of cases rose and Bhilwara accounted for majority of the cases in Rajasthan, it was extremely stressful for us. Bhilwara was being described as the Wuhan and Italy of Rajasthan. And, it was not a wrong assessment. The doctors at the Bangar Hospital had seen thousands of patients, and we had no means of tracking them down. My team and I did not go home for around a week as we rolled out containment measures.

Strict containment was required because we were completely in the dark about the extent to which the virus had spread. As Bhilwara is a textile hub, the local people travel extensively on work. Most businessmen travel to Mumbai, Delhi and Chennai regularly.

We expected people to get fed up with the curfew. While they were initially allowed to step out to avail essential services, we later stopped that and started doorstep delivery of groceries, fruits and vegetables and milk. Cooked meals and dry rations were delivered to the poor. 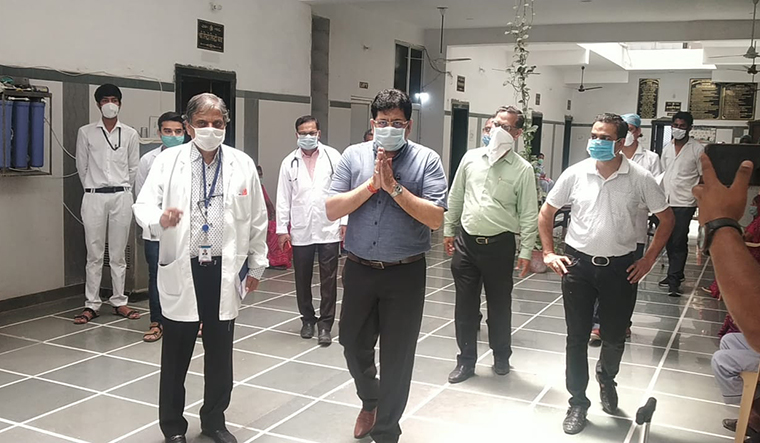 Dedicated work: Rajendra Bhatt (centre) during a visit to MG Hospital, Bhilwara, where a majority of Covid-19 patients were admitted

The next step was a massive screening exercise that covered every household in the district. It was a desperate measure. We had to identify the patients who had been to Bangar Hospital and the doctors’ home clinics. We also wanted a watch list of people with influenza symptoms and also those in the high-risk category—such as people who had returned from abroad, the elderly and those with other ailments such as high blood pressure, heart disease or diabetes.

More than 3,000 teams carried out door-to-door surveys in three phases, screening close to 11 lakh people in Bhilwara city. In the rural areas, two rounds of screening were carried out by around 2,000 teams, and they surveyed close to 23 lakh people.

Around 7,000 people were quarantined at home or in our isolation facilities. We acquired hotels, resorts, hostels and dharmshalas to set up quarantine facilities with around 14,000 beds. And, in anticipation of a possible spurt in the number of positive cases, we took over four private hospitals.

A war room—comprising representatives of the health department, the local administration and the police—was set up to coordinate the containment efforts.

Out of our 28 Covid-19 patients, 25 have been cured. Two of them died; doctors say pre-existing conditions caused their deaths. Both the casualties were former inpatients at Bangar Hospital; we had found them when we tested all those who had been admitted to the hospital.

We will come to know of the real extent of the spread of the virus only when we test around 12,000 people who are currently in quarantine or those who have influenza-like illnesses or who are even asymptomatic but are in recognised clusters. 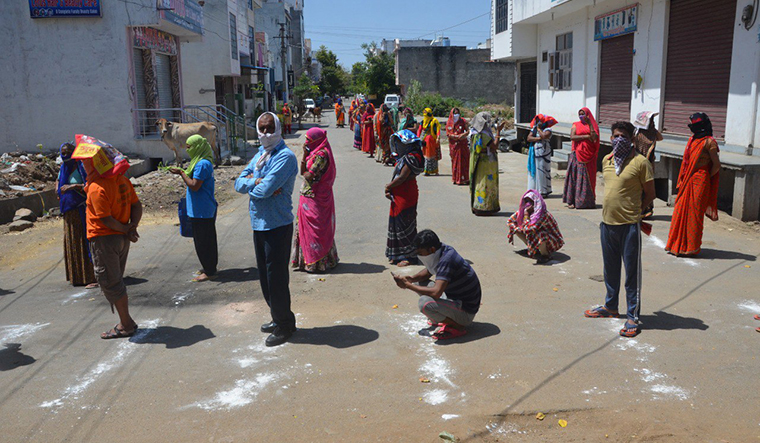 Distance maintained: People waiting for their turn to buy groceries

Bhilwara did not have a lab to conduct tests. When we requested Rajasthan Chief Minister Ashok Gehlot for one, he immediately obliged. Around 160 samples are being tested here daily. With rapid test kits, we aim to conduct mass testing followed by quarantining of the infected. This is how we will break the chain.

This definitely is the biggest challenge of my career. But the battle is not over, yet. While I can say with confidence that we have contained the coronavirus in Bhilwara, we are still not out of the woods. The virus has a cycle of 14 days, which is why we have a quarantine period of 14 days. I can be satisfied only when three cycles of 14 days each get over, without a spike in the number of cases.

The first cycle of 14 days—starting from March 19, when the first cases were reported in Bhilwara—got over on April 3. We imposed an even more stringent curfew—Maha Curfew—from April 3. Now, people cannot step out of their homes for anything. Maha Curfew will get over on April 17. And then will begin the third and the most crucial cycle, ending on May 1. The number of cases that we will see in the third cycle will tell us whether Bhilwara is witnessing community transmission or not. If we get one or two cases a day, it would mean that the disease has been contained to a large extent. However, if we get more than 25 cases a day, it would mean that the virus is spreading in the community.

We got the 28th patient after several days. And this patient has no link to Bangar Hospital. This means we have to think of new strategies.

It is definitely encouraging to learn that the Bhilwara model is being looked at by other states as a format that can be emulated. However, I would like to stress that what we did was specific to the scenario in Bhilwara, where a hospital had become an epicentre of infection, and the measures took into account the demographics. It is not a one-size-fits-all strategy.

The Bhilwara model can be emulated in a district with an urban population of around five to 10 lakh, and a rural population of 25 to 35 lakh. But you cannot implement it in big cities like Delhi and Mumbai, where the population density is high. We placed thousands of people in home quarantine. If you try to do the same in a place like Dharavi, where a small room would have up to 10 occupants, how are you going to maintain social distancing? So, every hotspot will need a customised strategy.

As told to Soni Mishra 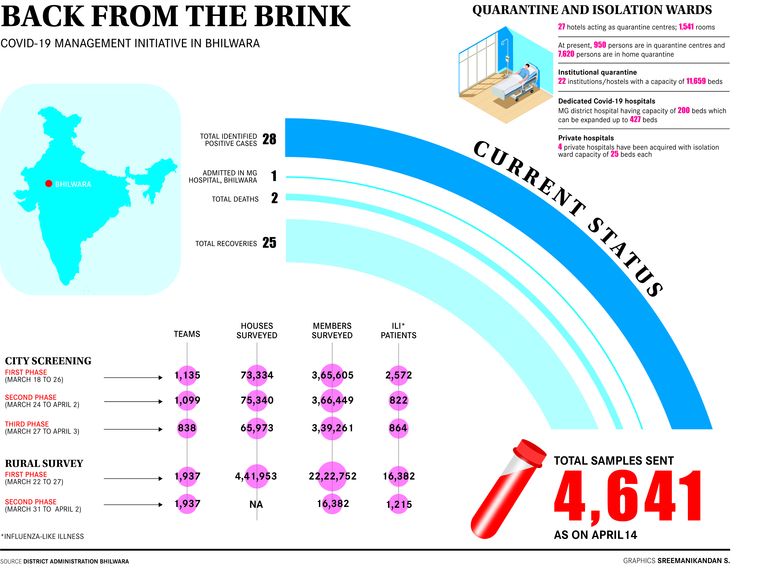