Two Lingayat mutts set the stage for a social revolution 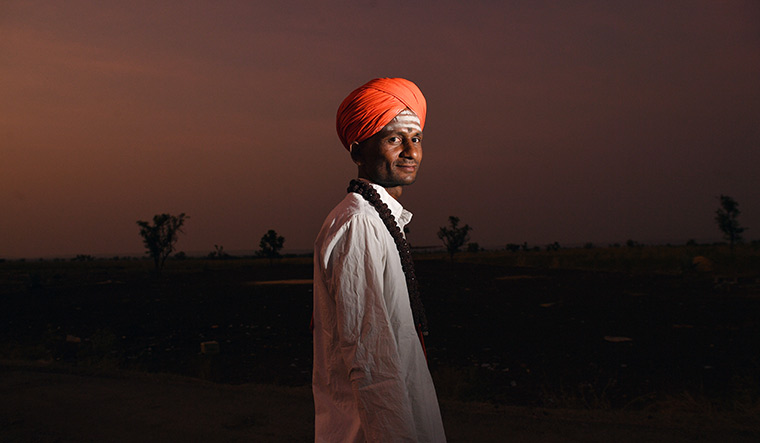 Leading light: Sharief used to be an alcoholic and a wife-beater, but today he gives sermons as the head of the Murugharajendra mutt | Bhanu Prakash Chandra

EVEN AS DELHI witnessed one of the worst communal riots in its history last month, two Lingayat mutts in Karnataka underlined the promise of religious amity and social equality, which is integral to India’s diverse culture as well as its Constitution.

“The Basava tatva stresses on gender and caste equality. Everyone speaks about it, but only a few practise it. I was keen to choose a successor from a different community,” says Mahanta Swami, the senior pontiff of the Mareguddi mutt. In most virakta (renunciation) mutts, the pontiff names his successor, who is initiated by a celibate upper-caste Lingayat priest. But Mahanta Swami had taken deekshe (initiation) from Siddarama Sharana, a dalit pontiff from the Beldal mutt, who was a grihastha (family man). “The Sharana tradition says the teacher is the one who is enlightened, has the right conduct and has mystic powers. I have given deekshe to dalit families. Any one who wears the linga on his body is a Lingayat,” says Mahanta Swami. Anointing a woman pontiff was the unfulfilled wish of his late guru Mahanta Shivayogi Swami, Chittaragi, Ilkal mutt. “When I was on the lookout for my successor, I decided to fulfil my guru’s wish and I found an able spiritual leader in Neelamma Thayi,” he says. “She is a hard worker and is known for her selfless service and patience. She is also proficient in Vedanta and Vachana Sahitya.”

Neelamma, who hails from Samshi in Dharwad district, studied Vedanta at Brahmanand mutt in Samshi. She did her BA and obtained a diploma in education before joining the Mareguddi mutt school in 2010 where she taught maths and Kannada. “I started assisting guru bai (the senior seer’s mother) in mutt activities. As I always had a spiritual streak in me, my family did not insist on marriage,” says Neelamma, who has been given the title Vijaya Mahantamma Thayi after her elevation.

“I was attracted to Basava tatva as it does not practise caste or gender discrimination. It embraces all. As a girl, I used to attend discourses in Samshi, my hometown, with my mother. I accepted Jangama deekshe six years ago,” she says.

Her discourses on the tenets of Lingayat dharma are popular. “I plan to go on a door-to-door campaign asking people to symbolically drop their vices like alcoholism, tobacco chewing, smoking and also phone and internet addiction into my jolige (bag),” says the new pontiff, who wants to follow in the footsteps of the late Mahanta Shivayogi Swami, known as the jolige swami.

Munna to Swami: an inward journey

In an open field outside his small mutt in Asuti village sits Sharief, the new pontiff of the Murugharajendra ashram. Dressed in a saffron turban, white kurta and panche (dhoti), he keeps on scribbling something in a book, even as people gather around him. Mothers carrying sick children squat nearby, waiting to meet the new pontiff. “I am writing down the chants. It helps me stay positive. The people are here to tell me their problems,” says Sharief. “The elders complain about their unruly children, the youth come looking for a job or marriage proposals. I tell them to give up all vices and their life will get back on track. “

Sharief, or Munna as he was known in his previous avatar as an auto rickshaw driver, used to be an alcoholic and a wife-beater, but today he gives sermons on right conduct and selfless service. His anointment was met with both criticism and praise. Some traditional Lingayat mutts have criticised the elevation of a Muslim to the top post. A few members from the Muslim community, too, have expressed disappointment with Sharief’s “conversion”. 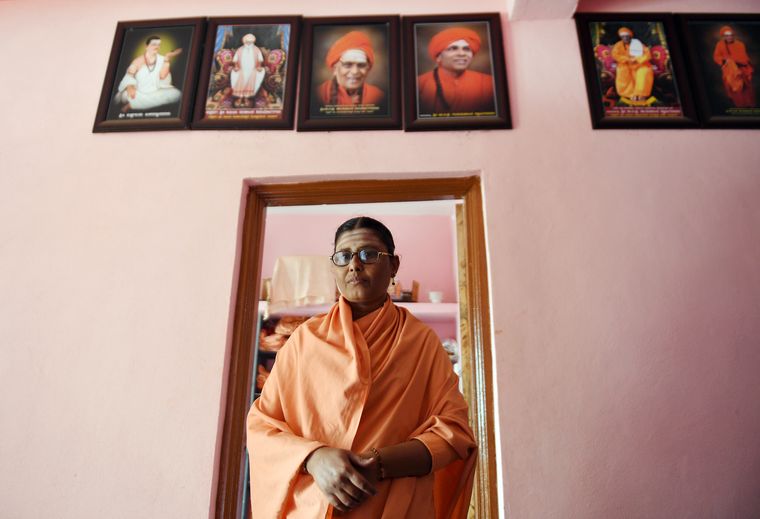 Revolutionary change: Neelamma Thayi’s guru says she is a hard worker and is known for her selfless service and patience | Bhanu Prakash Chandra

There have also been questions about Sharief’s marital status as a majority of the pontiffs have been celibate. But Sharief’s guru Niranjana Pranava Swaroopi Murugharajendra Koraneshwara Shivayogi Swami, says, “Basavanna had two wives and he showed how one could pursue spirituality even while discharging worldly duties. Vachana, mantra and samskara can change a man. Sharief has overcome his vices and is ready to guide others.”

The turning point in Sharief’s life came the night his father, Rehman Saab, passed away. Rehman Saab, who ran a small flour mill, was a staunch follower of Basavanna’s philosophy of kayaka (selfless service) and a devotee of the Murugharajendra mutt. He was also a healer who chanted mantras and gave Ayurvedic medicines to patients suffering from fever and mental illnesses and also to victims of black magic.

“Sharief came home drunk the night his father died. That was the last day he consumed alcohol. He stopped hitting his wife and sobered down,” says his mother Fathima, who donated two acres—the entire property owned by the family—to build the Shanthidham mutt for her son.

Sharief’s wife, Shamshad Begum, now struggles to run the household. Fathima says Sharief will not spend a penny from the donations received by the mutt. “Now my younger son Nazeer has to take care of me, and also of Sharief’s family. But I am happy that Sharief is finally leading a respectable life,” says Fathima, whose family continues to follow Islam.

Shamshad Begum says the family performs namaaz at home. “My children attend Arabic and Quran classes at the local masjid,” she says. “When I told my parents that Sharief was becoming a Lingayat pontiff, they told me to remain calm. ‘He has chosen his path, you follow Islam’, they told me. But my sisters and other relatives are really upset.”

Sharief never performed namaaz and always made fun of people in saffron robes. Although he dropped out of school, he closely followed intellectuals and achievers on social media to understand their lives. “One day, some people brought a sick child to me,” says Sharief. “I told them I could do nothing as my father was no more. They forced me to chant and cure the child. I called Khajuri Swamiji and he asked me to chant ‘Om Namah Shivaya’. Surprisingly, the child recovered. I felt I should really work to help people in distress.”

After joining the mutt, Sharief gave up alcohol and meat. He says the Quran and Basava tatva teach the same things. “The Quran says wake up early and pray to Allah. Basavanna also stressed on offering prayers early in the morning. Kayaka is a value cherished by both cultures.”

Sharief is slowly learning the Vachanas and other texts. He finds it difficult to read books because of his lack of formal education. “My guru is training me and some followers are helping me study the texts. I speak from my experience. I try to reform youth who are alcoholic and lazy,” says Sharief.

While the Mareguddi mutt and the Murugharajendra mutt have dared to challenge age-old customs, purists are opposed to the latest reforms. Says Fathima, “I gave my land to Sharief although our family has nothing else to fall back on. When he dies, Muslims will not allow his burial in their cemetery. Hindus, too, will do the same. I thought if he owns the land, he can at least rest in peace.”