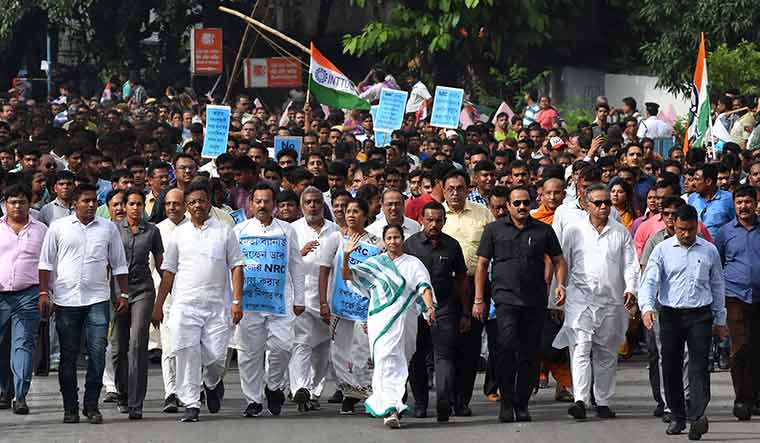 Road to victory: Mamata Banerjee leading a protest demonstration against the NRC in Kolkata | Salil Bera

On November 28, when byelection results from three assembly seats in West Bengal were announced, senior BJP leaders from the state were in Jharkhand, campaigning for the ongoing assembly elections there. The results were disappointing for the BJP as it lost to the Trinamool in all three seats—Kaliagunj, Kharagpur and Karimpur.

The BJP, which won 18 of 42 seats in the Lok Sabha elections, has been working hard to unseat Chief Minister Mamata Banerjee. “We will introspect about the bypoll results immediately,” said Suresh Pujari, one of the three BJP state in charges responsible for West Bengal. The state BJP leadership blamed the controversy surrounding the National Register of Citizens for the defeat. “The Trinamool used our NRC campaign to their advantage. It injected fear even in the minds of Hindus that they would be driven out by the NRC process,” said BJP state vice president Biswapriya Roychowdhury.

While Mamata made an impressive comeback after the lacklustre performance in the Lok Sabha elections, her vote bank is far from secure. She is worried about the growing clout of the All India Majlis-e-Ittehadul Muslimeen (AIMIM), the Hyderabad-based party of Asaduddin Owaisi. Mamata has been travelling across the state, warning her supporters against Owaisi's growing popularity: “A Hyderabad-based party is campaigning across our state and is giving money to Muslims. You should not fall into their trap.”

Mamata's anti-Owaisi campaign turned aggressive after the AIMIM won the byelection held in October to the Kishangunj assembly seat in eastern Bihar, which borders West Bengal. The AIMIM is now setting up units across West Bengal with an eye on the 2021 assembly elections. “We started our job in 2013. It is giving us results in Bihar and we are going to get similar results in Bengal and Jharkhand in the coming days,” said Syed Zamirul Hasan, who heads the party's operations in the east. “Mamata cannot take Muslims, dalits and tribals for a ride. She will have to go.”

Hasan said other than saying inshallah and mashallah, Mamata had not done anything for Muslims. “She blames the left for the condition of Muslims, but what has she done in the past eight years?” he said. “Even the imams' salaries are being paid by the waqf property while she splurges from the state coffers for Durga Puja. She is the biggest enemy of Muslims and dalits.” Hasan said the AIMIM would contest all 294 seats in West Bengal in 2021 to ensure Mamata's defeat even if that helped the BJP.

There are 105 assembly constituencies in West Bengal which are dominated by Muslim voters. Hasan said the AIMIM was growing because of Mamata's unholy nexus with the RSS. “How can Muslims forget that they are being looted by the Mamata government? What happened to the chit fund scam investigations? Her colleagues are with the Trinamool during the day and with the RSS at night,” said Hasan.

The AIMIM has set up committees in all districts and has even tied up with some leftists. Several human rights organisations and NGOs headed by Muslims are also reportedly working with AIMIM leaders.

The BJP has refused to be part of the debate over the AIMIM’s foray into West Bengal. Instead, it focuses on taking on a resurgent Trinamool for which it has put in place a three-pronged strategy, according to Pujari. The party hopes to have a “new organisational leadership” in place by January. It also plans to take up issues crucial to the state and create a “conducive situation” for itself, which it hopes, will be difficult for Mamata to handle.

Pujari refused to elaborate on whether the BJP would use law enforcement agencies against Trinamool leaders facing corruption charges. “But I must say that a right atmosphere will be created at the right time. If we create such an atmosphere now, it will have no effect during the assembly elections which is one and a half years away,” he said.