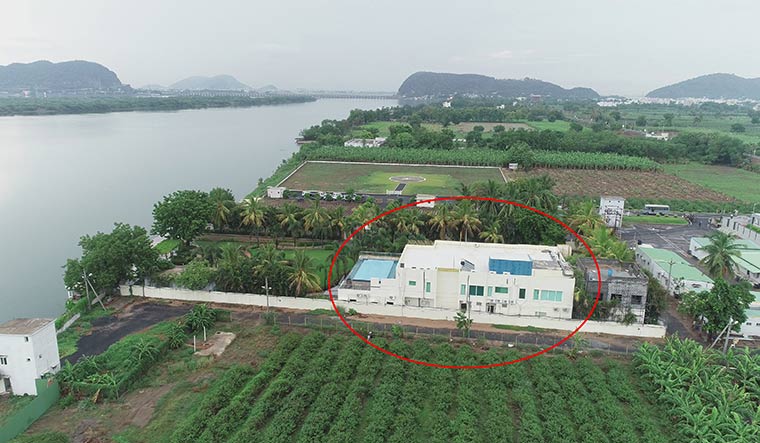 The riverfront bungalow where Naidu lives.

AN UNEASY CALM prevails in the Telugu Desam Party, as the fate of N. Chandrababu Naidu’s riverfront residence at Undavalli village near Vijayawada hangs in the balance. The former Andhra Pradesh chief minister lives in a bungalow on the banks of the Krishna, and it was allegedly built flouting environmental laws. The allegation has the TDP on the back foot, when it is yet to recover from the drubbing it got in the recent Lok Sabha and assembly elections.

Naidu and his partymen have not been able to counter the offensive launched by Chief Minister Jaganmohan Reddy and the YSR Congress. Having won a huge mandate, Jagan has taken a number of bold decisions within a month of taking charge. An eviction notice recently stuck outside Naidu’s home has so unsettled the TDP that it is yet to make a counter move.

“There are two views within the party,” said a TDP leader. “One section wants Naidu to make it an issue and capitalise on it to get people’s support. The other leaders want Naidu to quietly move out. Whatever stand we take, the structure will be razed.”

Naidu had moved into the bungalow in 2015, amid criticism from environmentalists and opposition leaders. A year later, he built a huge hall called Praja Vedika near the bungalow to hold official meetings and events. Praja Vedika, too, was constructed illegally, and the state government demolished it on June 26.

TDP leaders insist that their muted response to the demolition is part of a wider strategy. “We have decided to not criticise the new government for the first six months,” said TDP legislator Buddha Venkanna. “They spent around Rs1.5 crore for the demolition. Why should they spend so much public money? They could have used it for some other purpose instead. Whether it is legal or illegal, the owner of the land will fight it out in court.” 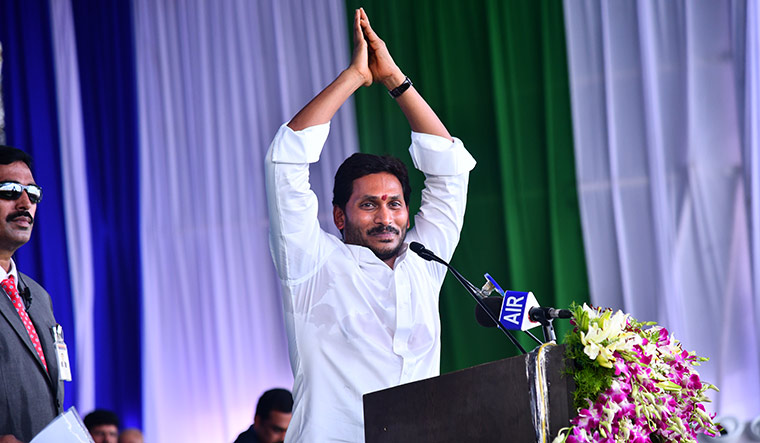 The green-keeper: Jagan’s decision to go after illegal constructions has pleased environmentalists.

By going by the rule book to corner Naidu, Jagan has projected himself as a strong and decisive chief minister. The state government has also issued notices to around 60 properties in the Krishna basin. Much of the credit for highlighting the illegal construction in the region goes to Alla Ramakrishna Reddy, the YSR Congress leader who defeated Naidu’s son Nara Lokesh in the Mangalagiri assembly constituency. RK, as Ramakrishna Reddy is popularly known, had petitioned the court over the issue two years ago.

“These constructions clearly violate the 1984 River Conservation Act,” said Reddy. “The structures are located between the river and a bund; as per the act, there should not be any kind of activity in this area, as it will change the course of the river. Praja Vedika didn’t even have permission from the Andhra Pradesh Capital Region Development Authority. Worse, Naidu used the premises for party activities, while it is supposed to be used only for official meetings.”

According to Reddy, Naidu’s residence was also constructed illegally. “I don’t know why he is still staying in the house,” he said. “His followers said it had permission from the panchayat, but so far no documents have been furnished as evidence.”

Naidu had earlier said that the property and surrounding land was acquired for building Amaravati, Andhra Pradesh’s planned capital city. But in 2015, when the TDP was in power, notices were issued against all buildings built on the river basin, including the bungalow built by Naidu. The same year, the irrigation minister said all properties that were issued notices were illegal ones, but the controversy died down after Naidu moved into the bungalow.

The flip-flops by the original landowner, Lingamaneni Ramesh, has not helped Naidu’s defence. Ramesh had earlier said that he had no connection with the property, as he had given it away to the state government. He now says the property is legal.

Environmentalists are pleased with Jagan’s decision to go after illegal constructions. “We have been opposing [Naidu’s residence] from day one,” said Bolisetty Satyanarayana, who petitioned the National Green Tribunal against illegal constructions in the Krishna basin. “If one were to look at a map in the state’s 2010 disaster management plan, 70 per cent of the proposed capital city of Amaravati was inundated in the 2009 floods. These low-lying areas are part of the floodplain. Any construction in that zone will destroy the river ecology. We are hoping that the state government would demolish Naidu’s residence and all other illegal properties. If exemptions are given, the practice [of flouting rules] would continue.”

Jagan has also won praise for banning bauxite mining in forested areas of Visakhapatnam district—a decision that the tribal community has long been demanding. Jagan’s style of functioning makes it clear that he is on a mission to prove himself. Within days of taking charge, he transferred nearly 80 IAS and IPS officers, and declared that he wants to be called the best chief minister within a year.

“It looks like Jagan is making his moves carefully,” said political analyst Pentapati Pullarao. “He is making sure that he is not doing anything wrong. As far as Chandrababu Naidu is concerned, he had spent a lot of money. He lost even after he transferred money to voters under various schemes just before the elections. He is not in a great position, and it will be interesting to see how he re-establishes himself.”