Is it a crime to join the Congress? 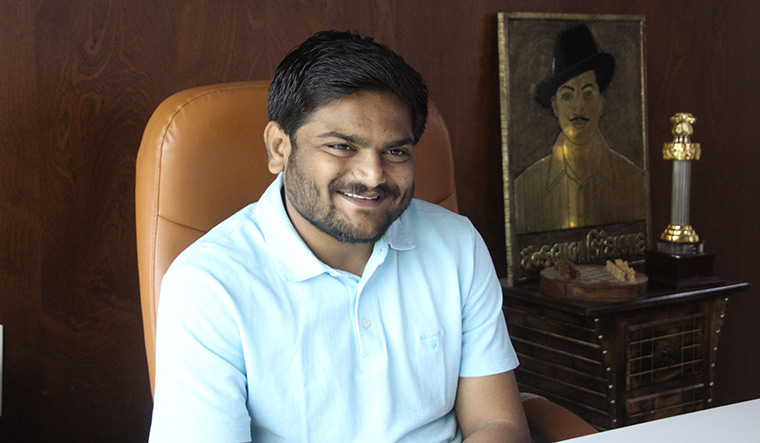 AT 21, Hardik Patel became the face of the Patel quota stir that began from north Gujarat in July 2015. The community, which constitutes 12 per cent of the state’s electorate, was demanding reservation in education and jobs. Almost a month later, Hardik addressed a massive gathering in Ahmedabad. He was probably the only leader in the state after veteran politician Shankersinh Vaghela or Prime Minister Narendra Modi to attract such a crowd. The agitation turned violent when he was arrested and 14 people died in the police crackdown.

Hardik continued to remain in the news; cases were slapped on him, including two sedition charges. The BJP tried hard to ignore him and alleged that he was a Congress hand. There were even rumours that he was backed by the RSS. Hardik travelled nationwide and campaigned extensively in Gujarat, openly seeking votes for the Congress in the 2017 assembly elections. It paid off; the BJP was restricted to 99 seats in the 182-member assembly.

Now that he has joined the Congress, it remains to be seen how the Patidars react to him during the Lok Sabha elections. He is surely an asset for the Congress and a big nuisance for the BJP. It is not without reason that the BJP is trying to “win over” Congress MLAs from various strata of the society to counter Hardik.

He was sentenced to two years imprisonment in a rioting case during the 2015 agitation. The High Court had granted a stay on the jail term, but not on the conviction. He has now filed an appeal seeking suspension of his conviction so that he can contest elections. He is likely to contest from the Jamnagar Lok Sabha seat or later from an assembly seat in north Gujarat.

A day after joining the Congress, he spoke exclusively to THE WEEK. Edited excerpts:

What made you join the Congress?

Why would people vote for the Congress?

Whatever jobs you see now were created during the Congress regime. No new jobs have been created. A recent survey indicated that the unemployment figures in the last five years are the worst in 45 years. The BJP has leaders who can fetch votes, not run the country. The Congress has leaders who can run the country. They do not get into vote bank politics.

How will you be helpful to the party?

I have been helpful for the last three and a half years (smiles).

When will the Anna Hazare chapter stand exposed? When the United Progressive Alliance was in power, was Hazare a BJP man? Is Baba Ramdev a BJP man? Was General V.K. Singh [when he was Army chief] a BJP man?

The question should be: what did we do in the last three and a half years? We worked honestly, without the fear of anyone. Congress MLAs switch over to the BJP and become ministers within hours. Efforts would have also been made to win us over.If the BJP is worried about some 2.20 lakh voters in an assembly seat somewhere, then it would definitely have done something about someone leading the whole community.

Why didn’t you join the BJP?

When a child is born in a population of 135 crore people, he has respect for the country. One should have that much rashtravaad (nationalism). I cannot sit with the killers of Mahatma Gandhi.

Now that you have joined the Congress, will the Patidars support you? They are traditionally BJP voters.

It is not written in property papers that if you are a Patidar you must wear saffron robes from childhood. Let the new generation decide what it wants to do. And we have come to change that only. This is what we have been telling the youth of the country—not to become anyone’s slave. Even though I have joined the Congress, I would not say that people should become a slave of the party. It is necessary for the masses to become aware. You have history. Read the history, understand it and then do what you feel is correct....

If Modiji had so much love for the poor, then why did he not announce 10 per cent reservation three and a half years ago? Why did he announce it after the Patidar agitation? If the BJP wants to take credit for giving 10 per cent reservation, then why did it slap cases on us? Why was I behind bars for nine months? Why was I being sent out of state for six months? The BJP is playing politics over those who died during the agitation.

How can two swords—OBC leader Alpesh Thakore and you—remain in one sheath?

This might be your perception. I have no competition with anyone. Those who are weak will indulge in competition. I have said this earlier, too, that I am 25 and have joined the party with all seriousness and patience. Thakore is 40. I will be 40 after 15 years and Thakore will be 55.

Where will you contest from?

I have not decided anything. Personally, I might think of some seat. There is a court matter also. I might be the first person who does not know whether he can contest an election or not. Yet, I have joined the party, which means that I have joined without any demand or bargaining.

What are the achievements of the Narendra Modi-led government at the Centre?

Has everyone received Rs15 lakh in their accounts? There cannot be a bigger achievement than this.

Will the recent air strike become an election issue?

What will be your key issues?

Good education in my constituency, immediate jobs for the educated, ensuring that there are no farmer suicides and remaining in the constituency for at least three of the five-year term.