Hockey World Cup: Why there are no clear favourites 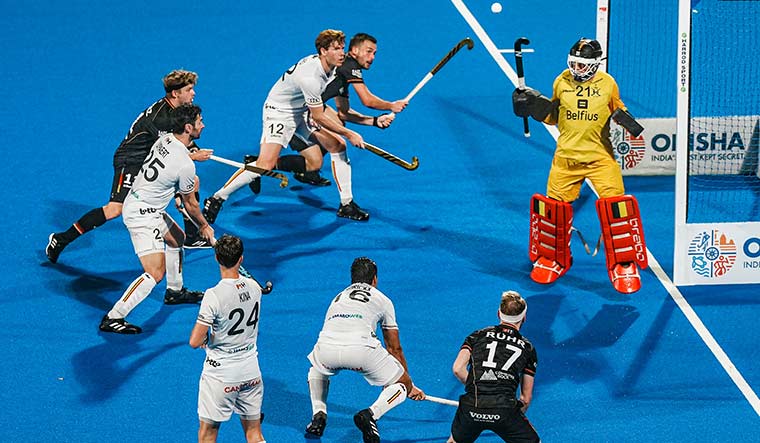 Neck and neck: Defending champions Belgium and former winners Germany played out a lively 2-2 draw at the Kalinga Stadium in Bhubaneswar | PTI

It is a World Cup with no outright favourite. Just look at the initial pool games. While defending champions Belgium and former winners Germany played out a lively 2-2 draw at the Kalinga Stadium in Bhubaneswar, three-time champions Australia were held to a 3-3 draw by a resurgent Argentina at the same venue. More than 300km away, at the new Birsa Munda Stadium in Rourkela, the clash between hosts India and England ended in an entertaining draw―0-0.

Yes, Spain beat Wales 5-1 and Belgium beat South Korea 5-0, but the stronger teams were made to work hard for each goal. As of now, it seems that eight of the 16 teams can go on to lift the trophy.

Said Belgium captain Felix Denayer: “We are really well prepared. We have been to a training camp in Spain, where we won all our games. So, there is a lot of confidence in our camp that we will do well in the tournament.”

He did admit, though, that retaining the trophy would not be easy, despite the lengthy preparations. “There are a lot of favourites, I think,” he said. “Obviously Australia. Then the Netherlands, Germany―and India at home are always strong opponents. Then there are teams who are performing well―such as England and Argentina―so I think it will not be easy for anyone.”

The thrilling final of the 2018 edition―Belgium versus the Netherlands (3-2 in the shootout)―is still fresh in the mind of the champions. And they do not expect this edition to be any less dramatic. “Yeah, I think the tournament will be a challenge, but we also have the experience,” said Denayer. “We feel confident and we are hungry to retain the trophy. We are an ambitious group. And I think we need these kinds of challenges to perform at our best.”

Speaking of challenges, the hosts know about the added pressure of winning at home. On an upswing after winning bronze at the 2021 Tokyo Olympics, India will look to win its second World Cup, this time at home.

England, in Pool D with India, is also searching for the elusive World Cup win. Its best finish was a silver in 1986, when it hosted the tournament. “I think we are contenders for the World Cup,” England captain David Ames said before the tournament. “There is a lot of belief in our camp as everyone is confident about their abilities and we have also trained well in the past few months. We went on many tours and played some top teams like the Netherlands and Argentina, which has prepared us for the World Cup.”

The India-England match had opportunities galore, but sound defence and stout goalkeeping from both sides kept the scoreline static. The finishing, though, was off target, which will be a concern for both coaches.

“The team has been in good form in the past one year and we will look to repeat the same in the tournament,” said England coach Paul Revington. Goalkeeper Oliver Payne, however, was unhappy with the draw. “We had a good game overall, but we are a little disappointed not to have capitalised on the scoring opportunities. It was a game we could have won, but it is a hard-earned point and we will take it.”

Powerhouse Australia, meanwhile, has openly stated its intent to take home the World Cup for the fourth time. Said captain Eddie Ockenden: “We have big ambitions in the tournament. We want to do well and have confidence that we will be able to win. Our team has a lot of experience, which will be really crucial for us.”

Commenting on his team’s makeup, head coach Colin Batch said: “We have a really good team and our players are prolific goal scorers. This is really important as it helps you win matches. At the same time, our defence is also really good and we often manage to restrict the opposition’s scoring. So, our fundamentals are strong and that makes us a really good side.”

There is still some way for the top teams to go before the knockouts, but the likes of Spain and Argentina have shown that they are not here to make up the numbers. As Jorrit Croon, scorer of the beautiful fourth Dutch goal against Malaysia (4-1), said after the match: “It is a good win to start the tournament, but we cannot get carried away. It is just one game and it is a long tournament.”