Interview: The javelin slipped a bit in the first throw, says Neeraj Chopra

His first throw was a mess because of the organisers, says coach Klaus Bartonietz 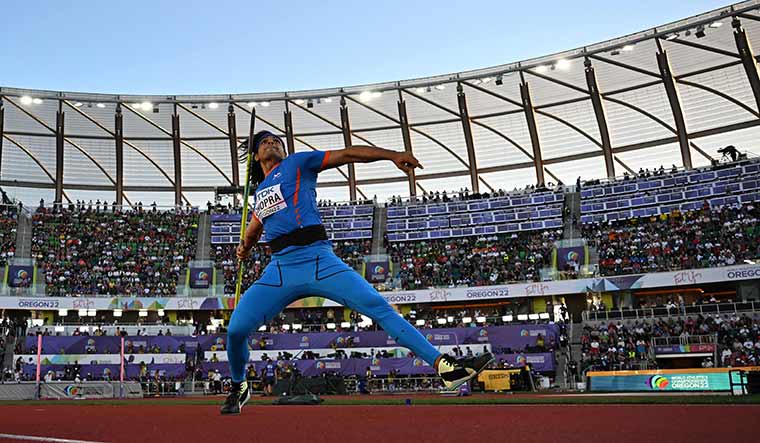 THE DAYS AHEAD of a major competition tend to be rather mundane for Neeraj Chopra. At least that is how it appears from the outside. But, as the day of the event nears, Chopra gets into his zone.

And so, on July 23, the Olympic champion threw the javelin far enough to book a place on the podium at his first World Athletics Championships, at Eugene, Oregon in the US.

Anju Bobby George, the only Indian with a podium finish at the World Championships before Chopra, was watching him from the stands. It was a 19-year wait for India; George’s long jump bronze in 2003 had put her in the history books.

At 24, Chopra has a gold each at the Asian Games, the Commonwealth Games and the Olympics, and now a silver at the worlds. He is already one of India’s greatest athletes. Unfortunately for him, though, he will not be defending his Commonwealth Games gold this time; he was ruled out with a groin injury days before the event.

His coach Klaus Bartonietz was both happy and sad about the way things panned out for Neeraj in the final. He said the organisation of the event was chaotic and his ward did not get enough time to warm up as he usually does. “Neeraj was in good shape,” Bartonietz told THE WEEK. “By his standards, the 88m throw was actually effortless. His first throw was a mess because of the organisers’ time management problems. Neeraj asked them how much time to go (he was the first to throw in the final), and he was told that time was already running! He did not get proper time to concentrate. He struggled to find his rhythm in the first two throws. I told him to get his concentration back; do his job like he did in training. It took a while before he could get this 88m. It was a great fighting effort.”

Heading into Oregon, the competition between the top javelin throwers in the world was getting intense. Grenada’s Anderson Peters breached the 90m mark thrice in the competition. Czech Republic’s Jakub Vadlejch, who came third, had thrown 90m in the Ooredoo Doha Meeting in May. The clamour to see Chopra cross 90m was getting louder as the event approached. On June 30, at the IAAF Diamond League in Stockholm, he threw 89.94m to win gold. He has crossed 89m twice this year. “He was not talking about it (90m) too much,” said Bartonietz. “He felt it would come. In Eugene, he did not find his rhythm. The conditions were not easy; the wind was blowing from different directions and there were some turbulences in the stadium.”

His preparations, though, were spot on. He qualified for the final with his first throw. As part of his preparation for a major event, Neeraj reportedly does an intense lifting session three days before it all starts. Bartonietz calls this the “boom-boom session”. He does fast lifts and focuses on speed; the next day is all about sprinting, followed by a nice, relaxing session. A day before the event he goes quiet, listens to music, does a light workout and does not go out much. He does a lot of mental training and visualisation.

Speaking to THE WEEK after the tournament, Chopra said he was happy to finish on the podium as this was one event he had yet to compete in and win. He also said there was no pressure of medalling at the worlds, even though his competitors’ throws did throw him off a bit. Excerpts from the interview:

Q/ Having won medals at the Olympics, the Asian Games and the Commonwealth Games, how would you describe your experience at the World Athletics Championships?

A/ It has gone well. If we talk of major competitions, I have won a gold medal in almost all. [I had it] in my mind that I have to win a medal here, too. The competition [here] was tough; the conditions were tough and windy. Everyone knows I start with good throws, but it was different here because of the conditions. It was challenging, but it feels good that I have a medal in this one, too. The good thing is that the World Athletics Championships is there next year, too, so I will have another chance to improve on my performance.

Q/ After your first throw was a foul, what did you and coach Klaus Bartonietz discuss and what did you tell yourself?

A/ I was the first to throw in the competition and you want to start with a good throw. But, sometimes it does not work out the way you plan. The javelin slipped a bit from my hand in the first throw. The second throw was 82m. It does come to your mind that the rest have thrown well—Anderson Peters (Grenada) and Julian Weber (Germany). Then in the third throw, I came in fourth. The wind was different from the front, and it was a new experience for me. But it feels good that I could manage the distance of 88.13m in my fourth attempt.

Q/ Was there pressure after watching Peters throw over 90m?

A/ Yes, there was some pressure for sure. Weber had a good first throw, too. What made it difficult was that I could not throw the way I wanted to in my first two attempts. Otherwise, I do not think of other athletes’ throws. I focus on my body’s response to the throw I am preparing for. Anderson Peters hit 90m thrice, and Julian Weber and Jakub Vadlejch (Czech Republic), too, did well. So yes, in terms of quality, the competition was really high.

A/ I was sure that a good throw would come. Till the competition is not over, I always tell myself that I have to at least match the distance I have already thrown. Everybody says I do well in my first throw itself, but I always say that our event is such that you have to throw your best till the last throw. You never know who might do better than you in his last throw.

Q/ Was there also the added pressure of winning since India had only one medal at the World Championships before you?

A/ We have got a medal at the World Championships after many years, but there was no pressure of that as such. I was motivated enough [to add the medal] missing from my kitty. My competitors were doing well coming into this event, and on field, too, the experience was different this time as the rest had thrown well ahead of me.

Q/ What did your coach say to you during your initial throws?

A/ The coach does not say much during competition. All he had to say or teach had been done during preparations. During the competition, he would say, ‘Yes, this was a good throw’, or whether the javelin had gone too high or too low.

Q/ How did you prepare mentally going into this competition?

A/ In competitions like the Olympics and the World Championships, it is more important to be ready mentally. You have to believe that you will do something good or special today. You have to be positive about throwing a particular distance at all costs. Even if you stay near your personal best, it is a good thing. Even if you are eating or doing chores ahead of the competition, the mind is always thinking about the event. You are totally tuned into it, mentally.