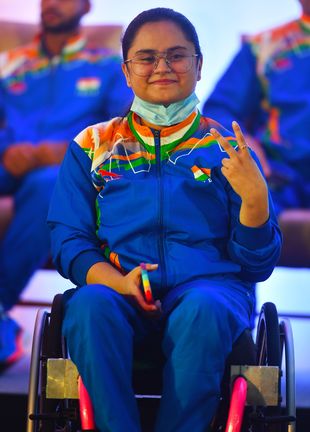 A star is born: Lekhara at a felicitation ceremony in Delhi | Arvind Jain

Avani Lekhara’s journey from her home in Jaipur to the Tokyo Paralympic Games has catapulted her to national fame, courtesy of her double medal. The calm, soft-spoken 19-year-old made history by becoming the first Indian woman to win gold at the Paralympics. It was a world record equalling feat in R2 women’s 10m air rifle SH-1 event (for athletes with lower limb impairment). A few days later, she added a bronze to her collection in the women’s 50m three-position SH-1 event. This was her first international medal in the three-position event.

Lekhara’s achievement made her only the second Indian ever to win multiple medals at the same Paralympics; Joginder Singh Sodhi won three medals at the 1984 Games. She also joined Sodhi, Devendra Jhajharia and Mariyappan Thangavelu on the list of Indians with two or more Paralympic medals.

Lekhara, who is currently pursuing a law degree, met with an accident in 2012 while travelling with her family from Jaipur to Dholpur. A bubbly, talented Lekhara had become moody and reclusive after becoming a paraplegic.

Her father, Praveen, did not give up. In 2015, he took her to Jagatpura Shooting Range and also gave her a copy of Olympic gold medallist Abhinav Bindra’s autobiography, A Shot at History. “I went to the shooting range during my summer vacation in 2015. I took up shooting just as a hobby, going there once or twice a week,” she said. “[The book] inspired me. [Bindra] really gave his 100 per cent. I always wanted to become like him.” She would go on to emulate her idol, but it was a difficult journey. There were mental demons to fight and the challenge of adapting with her non-functional lower body.

In 2015, Lekhara started training under coach Chandra Shekhar. She also roped in former air rifle Olympian Suma Shirur as her personal coach. Her first international medal was a bronze at the 2017 World Shooting Para Sport (WSPS) World Cup in Bangkok. She followed it up with a silver and a junior world record at the WSPS World Cup in the UAE the same year. Two more silvers came at the 2019 and 2021 World Cups in Croatia and the UAE, before she finally struck gold at Tokyo.

During the lockdown ahead of Tokyo, the Sports Authority of India ensured that Lekhara had a digital target installed at her home in Jaipur, where she would practice for the 10m air rifle event. Her foreign exposure trips and equipment requirements were taken care of by the government’s Target Olympic Podium Scheme.

Despite her achievement, the bronze in the three-positions event left her disappointed. The event is far more demanding for her. “It requires a lot of equipment,” said Lekhara. “For kneeling, prone and standing it is all different. Because I am on a wheelchair, adjusting and setting it all up takes time. Physically, too, it requires a lot of work as the competition lasts two hours and 45 minutes.”

Unlike with the Olympic shooting team, where there was bad blood between coaches, the Paralympics staff seem to have worked well together. “We have a very wonderful team—coaches J.P. Nautiyal, Suma ma’am, Harsh Rana—it is a very friendly environment and that helps a lot,” said Lekhara. “It is like a team effort.”