Despite Bangladesh’s poor show and visibility issues, the day/night Test was a hit 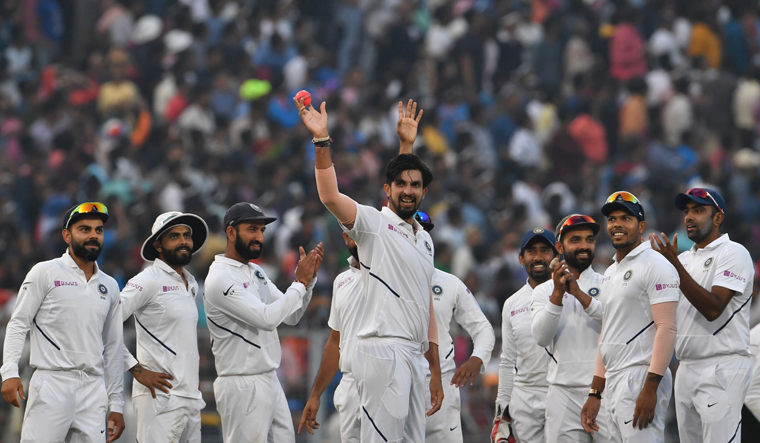 Day one of India’s first day-night Test, at the fabled Eden Gardens, saw a lot of action on and off the field. Several sporting icons, including former India captains, boxer M.C. Mary Kom, former shuttler Pullela Gopichand and tennis player Sania Mirza, along with BCCI officials past and present, turned up for the historic occasion. Ganguly, as the new BCCI president, left no stone unturned to make India’s first pink-ball Test memorable. Even political leaders, including Bangladesh Prime Minister Sheikh Hasina and West Bengal Chief Minister Mamata Banerjee, were in the stadium on day one.

While most guests were excited about the pink ball, the cricketers were more cautious. Former captain Mohammad Azharuddin, now president of the Hyderabad Cricket Association, said: “It is too early. Need some more time to see whether it (pink ball) works or not.”

Within the next two days, India crushed Bangladesh by an innings and 46 runs. However, there were mixed reactions about the visibility of the pink ball. While some players saw no problem with it, some like Cheteshwar Pujara said it was harder to spot under the lights.

Regardless, the first pink-ball Test had shown the way forward—the BCCI has to hype Test cricket to draw in crowds. Captain Virat Kohli and Ganguly echoed similar thoughts, with the former going a step further to accept, with caveats, his Australian counterpart Tim Paine’s request for a possible day-night Test when India tour Australia at the end of 2020 for a four-Test series.

Among the cricket legends was former India captain Kapil Dev, who marked the occasion by wearing a light-pink jacket. “It is a wonderful experience,” he told THE WEEK. “If players are happy, the problem is over. The main problem for Tests was that crowds were not coming. Here, you saw 60,000 people. That is why I feel Test cricket must be played in the main Test centres only.”

The pace legend also felt strongly about giving spectators, who pay for all five days, some incentives. “Look at how it works in Dubai (golf),” he said. “You buy a ticket for 500 dirhams and you may end up winning a Rolls-Royce! Let there be a lottery on the last day for spectators who came on all days. After the match, the captains can present a big gift to the lucky spectator.”

Kapil dismissed concerns about India playing weaker teams, which meant the matches were ending early. “When we toured the West Indies or Australia in 1960s or 1970s, they dominated us,” he said. “So what? Every team must work for Test cricket as they work for ODIs and T20s, shouldn’t they?”

Kapil also gave a thumbs up to the extra-lacquered SG ball. “There will be teething problems when a new thing is introduced,” he said. “Everything cannot be 100 per cent correct. Everything looked fine to me (with the ball). I am very positive about this innovation.”