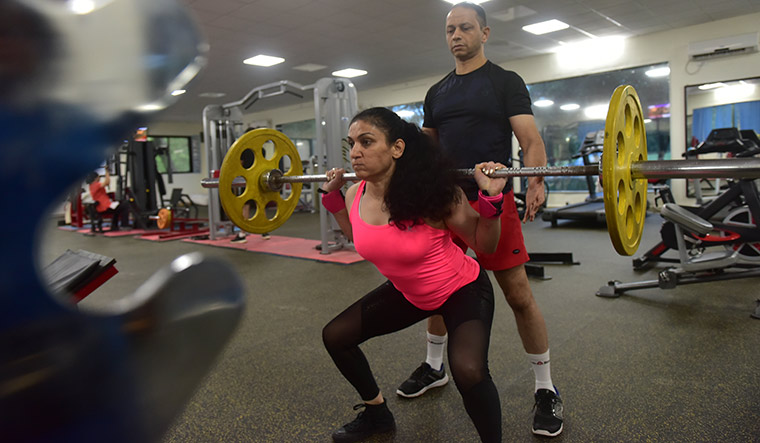 Core value: Bhavna trains as husband, Shreepad, watches on; (below) She is flanked by him and son, Aarav | Mujeeb Faruqui

DETERMINATION AND FOCUS, strength and willpower are writ large on Bhavna Tokekar’s face as she trains at the Defence Services Officers’ Institute (DSOI) gym in Bhopal. Forty-seven and a mother of two, Bhavna won four gold medals at the Open Asian Powerlifting Championships in July. But when she is home, her features soften dramatically as she speaks of her family; she says it is her support system and inspiration.

Powerlifting comprises three attempts at maximal weight on three lifts—squat, bench press and deadlift. It is not yet an Olympic sport, and is different from the snatch and clean and jerk lifts in weightlifting. The Asian championship for amateurs is organised by the World Powerlifting Congress (WPC) and had around 500 competitors this time, including 14 from India. Bhavna, won two golds each on July 13 and 14 in the Under 67.5kg Masters 2 category (45-49 years), competing in her first-ever amateur powerlifting event.

“I am extremely proud of what I did, but let me underline that I would not have done it at the cost of my family. For me it is always family first,” said Bhavna as her husband, Group Captain Shreepad Tokekar, and younger son Aarav, 15, proudly look on. “I brought honour to the nation, but I also feel that raising kids as good citizens is an equally important service to the nation,” said the champion.

Her two kids had their mother’s back at a crucial juncture this year. In May, Bhavna suddenly realised that the trials for her Asian Championships were to be held that month, and not in July as she expected. “We were planning a vacation as my older one, Ishaan, was home for the summer. I had never left the kids alone even for a night before that. So I almost decided that I would not go for the trials. But the kids and my husband insisted I go,” said Bhavna. 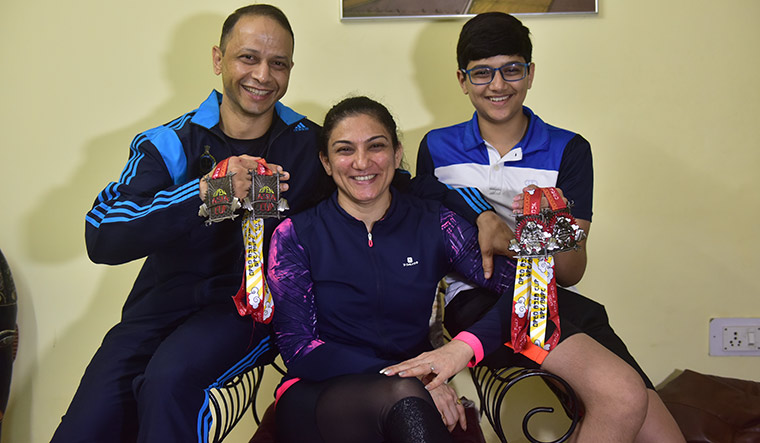 “Mother seemed to be a bit nervous, not about the trials, but about leaving us. I told her we could manage and that she should not miss the trials at any cost. Look at the results now,” said a proud Ishaan, 19, over telephone from his college in Vellore. The results are indeed stunning. And now, Bhavna is training hard for the World Championships to be held in December in Moscow.

Bhavna’s story is interesting.She was born in Vidisha, Madhya Pradesh, and was brought up in Gujarat. Daughter of Ahmedabad-based ex-railway officer Anand Bhave and homemaker Anupriti Bhave, Bhavna married Shreepad, a Kargil war hero, 21 years ago. “I gave up my job and concentrated on home and kids. With the support of Shreepad, who took care of me completely, I think I did very well,” she said.

She was a table tennis player during her school days in Godhra, playing at the district level. But the first chapter of the dramatic turn in her life began about seven years ago, when she started going to the gym to fight the side-effects of a medication she took for a skin inflammation.

She would use the gym at the Central Air Command, Prayagraj, where her husband was posted, and it was here that Sergeant Brindaban Mohanty suggested she take up weight training. “I do not know what he saw in me, but he was insistent and I started. I slowly got the hang of it. Sergeant Mohanty and later LAC Gaurav Sharma and Sergeant Raj Naik, who was Mr World 2016—all of whom were part of the IAF bodybuilding team—took over as my trainers. Slowly, my confidence grew,” said Bhavna. The three of them are now retired.

Around 2014, Bhavna and her husband started to work out together, instead of at different times, and this helped her routine. It was, however, Corporal Aruvi A. who was instrumental in her decision to take up powerlifting in 2017. And, when the Tokekars moved to Bhopal last year, and Aruvi moved to Darjeeling, the strong association continued, though it had shifted online. Even as this correspondent was speaking to Bhavna, Aruvi texted her to check if she was in the gym for her workout.

The decision to participate in the Asian Championships was sudden. Bhavna did her research on weight training and powerlifting, on the internet, and in the process, got in touch with Mohammed Azmat, WPC head of Karnataka and Andhra Pradesh. “In February, I casually asked him whether I could compete. He looked at my videos and said I could, but I would have to appear for trials. The rest is history,” Bhavna said with a smile.

It was during the trials at Bengaluru in May that Azmat met her for the first time. He gave all the necessary inputs for technical perfection and discussed the championship rules. But Azmat could not always be present for her training and Shreepad filled in as a shadow-trainer. “Azmat explained to me all the ways of monitoring and filming Bhavna’s training, to share it with him, so that he could make the necessary corrections. It was indeed a meticulous process of about five days that helped her a lot,” said Shreepad.

Azmat says that Bhavna had a solid foundation. “I only helped in harvesting what was already built by making the necessary technique corrections,” said Azmat. “Powerlifting is not only about strength. It is about focus and vision, which Bhavna is very strong on.” He also lauded the dedication and support of Shreepad in the entire process. As a Under 100kg Masters 1 category champion himself, Azmat is now an online trainer for Bhavna, and is helping her prepare for the World Championships.

It is, however, Bhavna’s family that is helping her the most on the ground. Shreepad and Aarav accompany her to the gym every day. Their constant encouragement makes Bhavna want to give her best. Like Ishaan said, “It is not [just] about winning golds at the championship. I know my mother is the best and she will excel in whatever she does. I am extremely confident of her.”