World Cup: How a fundraiser for underprivileged children raised 60,000 pounds

A fundraiser for underprivileged children on sidelines of World Cup raised £60,000 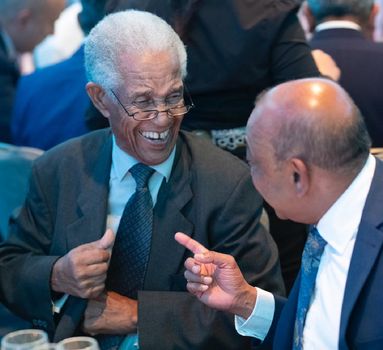 SIR IAN BOTHAM was a giant of the game. One of the best all-rounders in cricket history, he was also a darling of the tabloids. The younger generation may remember him for his role as a commentator. In England, Botham is also known for his charity work. The altruistic spark was lit early on. In 1977—the year he made his Test debut—Botham took a wrong turn in a hospital in England. He was being treated for a broken foot, and he found himself in a children’s ward where four boys were playing cards. He waved them goodbye and said he would see them when he returned for assessment. He was shocked when the nurse told him that the boys had leukaemia and would not live long.

Since then, Botham has raised over £13 million for leukaemia and lymphoma research. So, it was not surprising to see him at a charity event. But the onlookers were perhaps surprised at how he walked into the InterContinental, a five-star hotel about 10 minutes on foot from the Buckingham Palace, on June 7 for The AWARE Foundation’s Cricket Legends Gala Dinner 2019. Dr Philip John, who was a general practitioner and lecturer in King’s medical school, London, before retiring a decade ago, was one of the 370 guests. He said that Botham was relying on crutches because of bad knees and hip. But the England great looked just as imposing as ever on stage. In a video shared with THE WEEK by Dr John, Botham, 63, could be seen congratulating the organisers. “Good luck and raise lots of money tonight,” he said.

Katie Jarrett, events coordinator, The AWARE Foundation, said approximately £60,000 was raised from the event. “Money was raised through table sales, but mainly auction lots,” she said. The articles auctioned included India’s 2011 World Cup jersey signed by the players and Sachin Tendulkar’s autographed final Test match shirt. But, interestingly, the highest price was fetched by a bat signed by the members of the India team from the 2003 World Cup. It was sold for £6,000. The fundraiser was organised to support the UK-based foundation’s aim of providing education and shelter to disadvantaged and vulnerable children in India. Jayesh Patel, managing trustee of the foundation, is a UK-based entrepreneur. He said he wanted to give something back to India and he chose education as it had given him financial security.

While the guests and the 20 cricketers, including legends like David Gower, Mike Procter, Mike Brearley, Barry Richards, Clive Lloyd and Sunil Gavaskar, were well aware of the importance of the evening to deprived children in India, the mood was by no means sombre. Dr John, now settled in Kochi with his wife, said West Indian greats Courtney Walsh and Curtly Ambrose were on stage together and “relived great times” (read hard times for batsmen). Gavaskar was confident that India would win the ongoing World Cup and Lloyd spoke of how difficult it was as captain to keep the West Indies team together given that they came from different islands.

But the highlight of evening was undoubtedly the surprise appearance of the greatest all-rounder of all time. Sir Garfield Sobers, one of the five Wisden Cricketers of the (20th) Century. “I never played for my fame,” he told the gathering. “I always played for the team. My success was the team’s.” Sobers, 82, also had a strong message befitting the mission behind the gala: “I felt that I should always encourage the weak players rather than focus on the strong.”