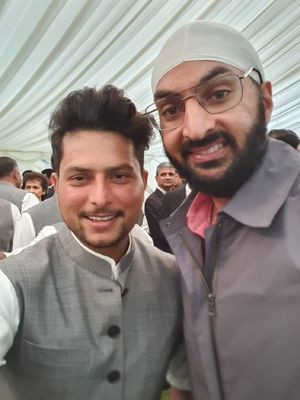 Former England spinner Monty Panesar, who last played a Test in 2013 and an ODI in 2007, has experienced the highs and lows of both form and fitness. Having been in and out of the team many a time, the 37-year-old is still hungry to play at the international level. In the past few years, he suffered bouts of depression and alcoholism, was let go by his county team (Sussex) and was diagnosed with paranoia and schizophrenia. To get his life back on track, he consulted former England captain and psychologist Mike Brearley, and recently came out with a book, The Full Monty, which describes his journey. In an exclusive chat with THE WEEK, he spoke about how he dealt with mental health issues and what he thinks of the ongoing World Cup. Excerpts:

Q/The character and approach of the England team has changed so much. Would you be able to fit in if you got the opportunity?

A/Yes, the pace has gotten quicker and they are playing attacking cricket [with] the white ball. They realised they have to play more fearless cricket. As they say, fortune favours the brave. And they bat deep. And that is working in England’s favour. It has got a lot to do with the Indian Premier League—you go there, smack the ball, [and] as a bowler, [you] got to be smart. IPL has played a huge role in terms of acceleration of the game globally. Everyone is trying to play quicker. I am aware of that and have been trying to be up there with my fitness.

Q/Leg spinners are now calling the shots in white-ball cricket.

A/Wrist spin has definitely evolved a lot more and captains are understanding how to use leg spin a lot better. Earlier, India and Pakistan used to do that. Spinners have always played a huge role. When you take pace off the ball, the batsmen have to do the work, they have to put pace on it. And that is a risk in itself. If they get it right, they hit it out of the ground. If they get it wrong, then it is a problem.

Q/How is this World Cup shaping up for the teams?

A/The thing is, England is the only place where conditions change. This week has been a lot wetter and the wickets are damp. The seamers will now play a bigger role. The game keeps evolving with the conditions. When its cracking sunshine, you will get 300-plus totals. I think it really just depends on conditions. With this format, there could be some surprise knockouts. I think India and England will play the semifinals. India has all bases covered, and England will do well as the host team. But the other two spots are open. Pakistan, Australia and New Zealand definitely look to be in the mix. Bangladesh can be a surprise; they play very well in subcontinent conditions in England.

I am hugely surprised with South Africa. I think they are flirting with this Kolpak system (in which players from countries with free trade treaties with the EU can play cricket in any EU country without being considered an overseas player), with their players coming to England. And [A.B.] De Villiers—I am shocked he is not playing the World Cup. Boy, doesn’t he know he owes it to South Africa to play the World Cup? He is the best player in white-ball cricket and he is not playing the World Cup. Maybe it is his body or maybe the expectations are too much for him!

Q/Who is your favourite spinner in this World Cup?

A/Adil Rashid. He needs to do well for England to progress, but I also like [India spinner] Kuldeep Yadav. I like his style, the way he gets the loop on the ball.

Q/How difficult was it being open about everything in your book?

A/Initially, I did not want to really talk about it because, being a sportsperson, you tell yourself you are strong. But then [English pacer] Jimmy Anderson’s agent told me [of] an opportunity. “There is a publishing company that wants you to write a book,” he said. Then I talked to [former England captain] Mike Atherton, who did an interview because everyone around England was saying “What has happened to Monty? Is everything okay? Has he gone off the rails?” There were just different rumours going around. So I just thought this was a good opportunity to talk, with the World Cup and The Ashes around [the corner]. Just get my story out there. This is what happened.

Q/How was the support from family and friends, especially as mental health is still a hush-hush topic in south Asian communities?

A/There is a statistic that, in South Asian communities, after the age of 18, males have a higher rate of mental health issues than any other ethnic minority in this country. Even some Bollywood stars talk about it. Deepika Padukone she said she was suffering from mental health issues and she is one of the top actors. People in India are also talking about mental health.

In a normal Asian family, it is quite common to talk about going to gym, having protein shakes, eating well and talking about physical health. But with mental health, they say, “No, no, what are you talking [about]?” This is nonsense. They don’t know what thoughts are going about in your mind. Sometimes it is just what you see and it is a trigger.

They think that it is like bezati (insult) to the family. My parents are open, quite cool. The best way to deal with it is to talk about these issues. [Having] mental health issues does not necessarily mean you are mentally ill.

Q/How challenging was it to put down everything?

A/I did not find it difficult. I thought if I am going to write a book, I am going to be totally open and honest, otherwise [there is] no point writing it. This book is for my fans, for people globally. Hopefully, [they] get inspiration and normal people can learn from how Monty came back. I am not saying it will work for everyone, but for some [at least]. It is not just about my cricket. Hopefully, everyone can relate to it.

Q/How difficult will it be to make a comeback?

A/I am training with Northamptonshire on a regular basis. Some coaches are trying to get me in with their training. It will now get drier, in July-August, and most teams will need a spinner. My body feels great, mentally I feel great. I am bowling like I used to at the international level.

Once you retire, you can do anything you want. Bollywood is a long shot, [but] sardars are in huge demand (laughs). Even the Punjabi film industry is blooming in India. But I do not feel like I am close to retiring. I get up in the morning, go to the gym and [work on] my fitness. All this stuff is happening naturally. I am playing club cricket, finding opportunities to play somewhere and doing the things a professional cricketer does.