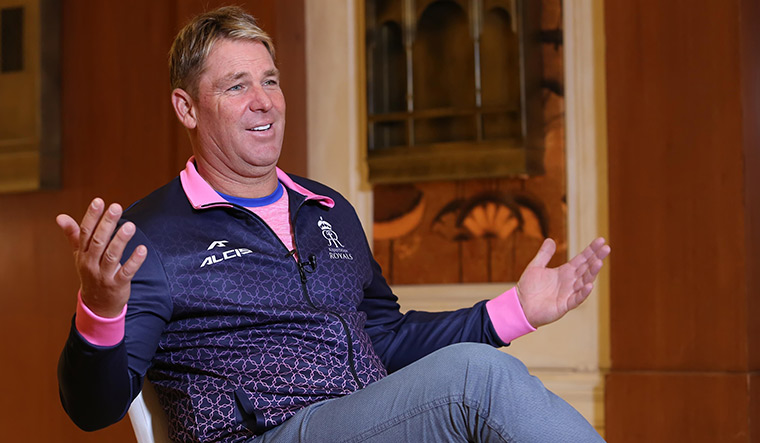 Leg spin legend Shane Warne’s bond with Indian cricket no doubt runs deep. He has been part of the Indian Premier League story since its inception in 2008. Having been the captain, coach and mentor of the Rajasthan Royals, he is now their brand ambassador. But, season 12 of the IPL precedes the ICC Cricket World Cup in England, and most people involved in the league will have that on their mind this season.

Warne played two World Cups and won one (1999). He has already labelled India and England as the favourites for this edition, and feels that his own country goes into the tournament as the underdog. In an exclusive interaction with THE WEEK, Warne shares his thoughts on the IPL, Steve Smith, the Australian team and the growing ilk of leg spinners. Excerpts:

You have been associated with Rajasthan Royals in multiple capacities. What is it about the Royals that keeps bringing you back?

Winning the first title as captain-coach was one of the best things I had done in my life. It is a very unique franchise and we are one big family. As you know, I am a very loyal person. I just love the franchise very much and all I am trying to do is help it where I can.

Having been a part of the IPL from the very beginning, how do think it has evolved?

I think the major thing out of the last 11 years is how well Indian [batsmen] now play fast bowling and how fast bowlers have emerged from India. When I first came to the IPL, the general plan was to bowl spin to overseas players and bowl fast to Indian players. But over time, Indians [have learnt to] play both spin and quick just as well, just like majority of foreign players have improved against spin. The IPL’s biggest beneficiaries have been Indian cricket and the BCCI, because India now has the right process and set-up in place and a domestic structure. The Indian national team is number one in Test cricket and they are going into the World Cup as favourites. So, they have done an excellent job of putting Indian cricket together. The cricket gets better and better every year. It is the best tournament and everyone wants to play in it. The passion of the fans makes it so unique.

What does RR need to do to have the consistency of, say, Chennai Super Kings?

I think we have been one of the most consistent teams over the years. In the last few years, we have managed to get some quality players, and this year we have our strongest squad. I think we will win it this year.

Steve Smith has made his return to competitive cricket. What advice will you be giving him in the RR camp before the World Cup?

Steve Smith is a class player. He has been around for a long time. If you look at Test cricket, Steve Smith is probably the only player on the planet who could challenge Virat Kohli in that format, at the moment. If you look at his numbers and record in all formats, he has been a fanstastic player. He has to step back [into the game] nice and easy. I am expecting him to be hungry. He will be a fantastic performer for the Royals.

Workload management is the buzzword with the World Cup close on the heels of the IPL. What is your take on it?

People have to go to [their national] camps before the Cup, but they also have to find some form, so this year’s IPL will be of really high standard. Everyone will be gaining knowledge, getting form, looking for different strategies and tactics and looking at different players.

Going into the World Cup, young leg spinners are attracting eyeballs. How crucial will their roles be in England?

Every team will have at least one leg spinner in their side, I think. Kuldeep Yadav and Yuzvendra Chahal for India, Adil Rashid from England, Adam Zampa for Australia.... Rashid Khan [Afghanistan] is probably the standout leg spinner with Kuldeep, at the moment, so I am really looking forward to following their progress through the World Cup and the IPL.

What, according to you, is the best approach to deal with Jasprit Bumrah? A lot of batsmen just want to play out his over.

At the moment, Bumrah is probably the best fast bowler in the world. It is very hard. He challenges you with the new ball and at the end of the innings. Just probably play the ball on its merit. My advice is, the tougher the bowler, the more aggressive you have to be facing him. You cannot just sit on things.

You have billed Australia as the underdog this time, but there have been controversies back home. How can Australia get back to becoming a champion side once again?

I think India and England are the favourites. They have performed really well over the last 12 months. But, Australia knows how to win World Cups. We have won four of the last five World Cups. Australia performs really well in big tournaments and that is a fact. They can still win the World Cup if they pick the right team. I think Australia has the players and we are starting to gel now, as we saw in Mohali.

So you think they are getting there?

Yeah, I think they are close. Obviously, with Smith and [David] Warner back, we will start to see the combination and what the final squad is. But, Australia has got a lot of talent in that form of the game.

Is this World Cup going to be about the bowlers?

This World Cup in England depends on the weather, does it not? If it is a really hot summer, we will have scores of 350 to 400 being chased consistently. Spinners and batsmen will dominate. If it is a wet summer with grey skies, then there will be lower scores and it will be dominated by faster bowlers. We will have to wait and see.