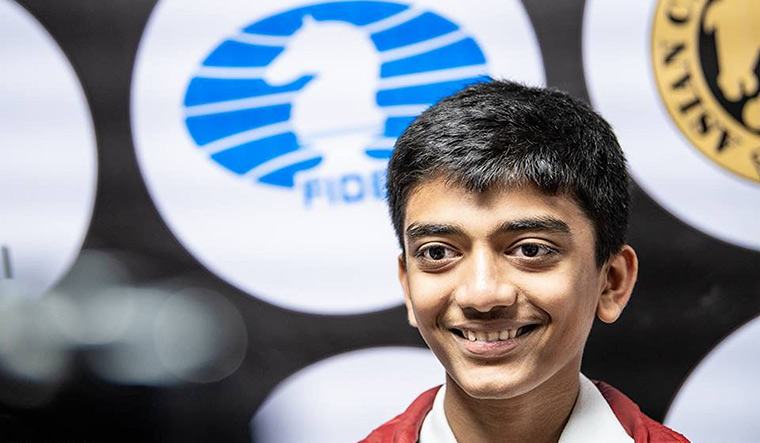 SIX MONTHS and 21 days. That is all it took for the record of India’s youngest grandmaster to be broken again. At 12 years, 7 months and 17 days, D. Gukesh became India’s youngest and the world’s second youngest grandmaster of all time, when he defeated Dinesh Sharma in the ninth round of the Delhi International Open Grandmasters chess tournament on January 15. He bettered the feat achieved by his city and school mate R. Praggnanandhaa in June 2018. Gukesh missed becoming the youngest GM ever by just 17 days—the record was set by Ukraine’s Sergey Karjakin in 2002. Gukesh is the third Indian, after Parimarjan Negi (2006) and Praggnanandhaa, to occupy the second spot.

The advent of prodigies like Praggnanandhaa, Gukesh and the 14-year-old Nihal Sarin has made the future of Indian chess look brighter than ever. Sarin became a GM in August 2018. Bharat Singh Chauhan, secretary of All India Chess Federation and president of Delhi Chess Association, let out a hearty laugh when asked whether the young harvest of chess talent in India is a coincidence. “Nothing happens in chess by chance,” he said. “This is a result of opportunities we are providing in India. We have a structure in place. We are giving more chances to juniors.... The focus is on hosting 250-300 FIDE rating competitions in a year. We are among top three in the world in terms of organising such events, plus we have eight International FIDE events. The growth among the juniors is phenomenal—the Delhi event had 75 per cent juniors participating.”

Gukesh achieved the feat on the auspicious day of Pongal in the ‘A’ category of the Delhi event. The ‘C’ category was later recognised by FIDE for breaking the record of most number of entries (2,815). The relief and joy of Gukesh’s victory were palpable, but there was no over-the-top celebration. He just smiled and told his mother, who had accompanied him, “I got the final GM norm.” In December 2018, at the Sunway Sitges International Tournament in Barcelona, he had missed breaking Karjakin’s record by just half a point.

“He simply loves playing chess. It is his passion,” his mother Dr Padma Kumari told THE WEEK. Gukesh lives out of a suitcase and has been completing one norm after the other over the past 16 months. After his feat in Delhi, he flew back home to pack and leave for the Gibraltar International Chess Festival with his father, Dr Rajinikanth, in two days. “I wanted him to rest after the [IIFLW] Mumbai event (in early January), but he just wanted to play,” said the beaming mother.

Gukesh is a seventh standard student of Velammal Vidyalaya, Chennai—a school that is home to many chess prodigies. But studies have taken a backseat. And, his father has put his own medical career on the back burner, accompanying Gukesh to every event. The parents even sold a property they owned to fund the boy’s ambitions. Though they leave most chess-related decisions to their son, his mother has a plan. “He is very good in his studies, too,” she said. “I think once he reaches the ninth standard, he will have to focus on his studies.”

A cousin taught Gukesh the basics and he took to serious chess at seven. “Occasionally, I would play with him at home, too. He was so quick to pick it up,” said Padma. “At a chess summer camp, the coach told us that we should put him in an academy.” Thus started Gukesh’s chess journey, first with coach Bhaskaran, then Vijay Anand, GM-in-waiting P. Karthikeyan and his current coach GM Vishnu Prasanna.

Said GM Abhijeet Gupta, who played Gukesh in the 10th round of the Delhi event: “He is quite strong. The pressure was there to achieve this norm in earlier rounds—one could see it playing on his mind. But he has very good temperament. He does not get excited by things outside the chessboard.”

According to Vishal Sareen, chess trainer who shaped talents like Negi and Sarin, “Chess is no doubt getting younger. Gukesh is a byproduct of a system. Extremely hard working, very self sufficient in chess.”

The achievements of Praggnanandhaa and Gukesh cannot be looked at individually. The likes of Sarin and C.K. Arjun, too, are making the world sit up and take note of the talent being churned out in India. “With so many GM tournaments in India itself, the juniors have the opportunity to play against stronger players at home now. That was not the case earlier,” said Gupta.

The cacophony that surrounded the arrival of the young stars was perhaps not so loud in Sarin’s case. But he is more than a chess talent. “He did not go to a coach,” said Sareen. “He is a natural talent. But time will tell how he goes ahead. He is very intense.”

Life after becoming a GM will not be easy. “Aiming for 2600-2700 ratings, the going will not be so easy for all three players. Now that they are GMs, people will study them and take them seriously,” said Sareen. For now, the key for the young GMs is to enjoy their chess as the nation looks on.