Women are on a mission to restore the Sundarbans

Reclaiming future: Women carrying mangroves to be planted on riverbeds in the Sundarbans.

Deep impact: Mangrove saplings being taken deep inside the Sundarbans for planting.

Taming the wild: A group of tiger widows taking a break from their daily schedule of planting mangroves.

Fishing is the main source of livelihood for the people of the Sundarbans.

Multiple species of mangrove seeds which are abundant in the delta.

Women measuring the growth of mangroves they planted.

Sarojini Mondal, 55, of Lahiripur island in the Sundarbans is worried about her sons, and her family’s future. After her husband’s death, her two sons have moved to south India, where they work as casual labourers. A mangrove sapling growing on a riverbed on the delta.

Three years ago, her husband, Sambhu, went fishing in the Sundarbans, one of the largest deltas in the world. Sambhu and his neighbour Radhakanta ignored official warnings and ventured deep into the mangrove forest. Crabs from deep in the Sundarbans―where boats do not ply and banks are muddier during the low tide―are much sought-after, often selling for up to Rs1,500 per kilogram. With the Sundarbans turning increasingly dry because of global warming, they probably did not have any other option. Unfortunately for them, it is an area increasingly frequented by the Bengal tiger. Long after they had crossed the danger line marked by the forest department, they were attacked by a tiger. Radhakanta, who tried to fight back with a stick, was carried away by the tiger. His body was never found. Sambhu, who was profusely bleeding, managed to row back to the village. A few hours later, however, he succumbed to injuries.

Sarojini is now a tiger widow―as they are known in the region―and so is Saraswati, Radhakanta’s wife. Many more such widows inhabit the hamlets of the Sundarbans, especially after Cyclone Aila struck the region in 2009 and damaged the flora and fauna. Subsequent storms and cyclones have destroyed the region’s forest cover, leading to a rise in tiger attacks and depletion of fish stocks. The rising water level has also submerged many islands. “Since 2016, around 750 men have been killed by tigers while catching crabs near the core area of the forest, according to official figures. Only three bodies have been recovered,” said Tapan Mondal, an activist. 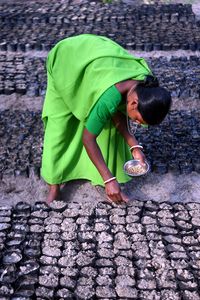 A woman at work at a mangrove nursery.

The West Bengal government is working on a project to give a compensation of Rs 2 lakh to tiger widows. But they need to prove that the victim was killed by a tiger. And that process involves courts and the forest department. “But the forest department often holds the fishermen responsible for their own deaths,” said Mondal.

Rekha Mandol lost her husband two years ago, to a tiger attack. While Rekha is fighting her case for compensation, her only son, Moloy, goes crab fishing, although he is one of the very few graduates in the village. “That is the only source of income for us,” said Rekha.

The widows, however, do not blame the tigers. They say the rampant felling of mangrove trees and global warming were the reasons why the tigers have become aggressive. “All these happen because of our previous generation. They felled mangrove trees and did not care for this place,” said 40-year-old Pushpa Mondal, another tiger widow.

Backed by several NGOs, the widows have initiated a mission to restore the pristine glory of the Sundarbans. They are planting five crore saplings across the delta, under a project launched by West Bengal Chief Minister Mamata Banerjee. “We want to plant more mangrove trees so that the tigers would remain inside the forest,” said 35-year-old Aparajita Mandol, who lost her husband last year. “Only that would save our men.”

While the women try hard to grow the forest cover, experts remain worried. “A recent study has shown that the waters of the Sundarbans have as much salt as the deep sea,” said Abhay Chandra, who teaches oceanography at Jadavpur University. The reason behind such a drastic increase in salinity is the drying up of the rivers in south Bengal. It has pushed up the salt level of the Sundarbans, affecting the fish population and the mangrove forest. Chandra said it could also affect the tigers and, subsequently, the people. “If mangroves are destroyed, then animals like deer would have less flora to eat. When their numbers go down, the tigers would attack human beings, leading to more deaths.”