For this sologomist, self-marriage means revolution in her uptight city

The first thing you notice about Kshama Bindu, who married herself on June 9 in a clandestine ceremony in Vadodara, is the sindoor in the parting of her hair. “I will wear it every day now,” she says. Her face is fully covered with a scarf, save for her eyes. She does not want to be recognised. Her curious decision to self-marry was all the rage in this quiet sanskari nagri.

Dressed in an all-black ensemble, with her t-shirt tied in a knot around her waist, the 24-year-old knows how to match her chunky sneakers with chuda (red bangles) on both hands. Instead of the initials of a better half, her dark brown mehendi has self-celebratory vows like ‘I will never quit on myself’ etched onto her hands. 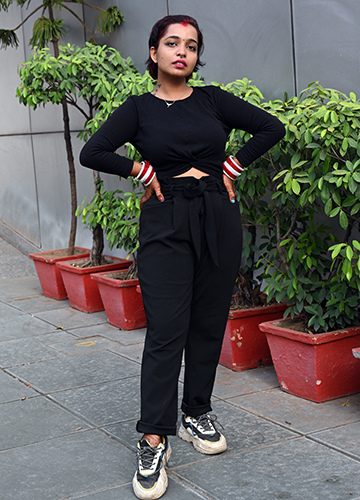 A woman of her own: Kshama Bindu.

The nuptial symbols are meant to denote Bindu’s commitment to the long life and well-being of her own self as a sologomist. “Other couples worry about how their life will change after marriage. I have found salvation after marriage. There are no expectations from anyone and now I am truly only accountable to myself,” says Bindu. Her big day was attended by a handful of her closest friends. The wedding feast comprised her friends’ favourite dishes, delivered at home. Her wedding expenses: Rs10,000. Bindu remembers contacting more than 25 priests to officiate her wedding in a temple. One of them agreed but then backed out, forcing her to shift the ceremony to her rented house. “I thought he understood everything I told him about sologomy,” recalls Bindu. “But later he told reporters he thought I wanted to marry a tree!”

Sologomy is a bona-fide act of self-love, driven by a great sense of self-belief and self-reliance, “emotionally, financially, sexually”. Bindu, who identifies as a bisexual, says even if she develops feelings for another person at a later date, she would not act on it. “I have been in relationships in the past,” she says. “But they were never enough. They have all treated me well. But I have never felt fully understood. Also, I am a lot to deal with.”

Bindu says she learnt to choose herself very early on in life, since she was eight. Born in Ahmedabad, raised in Daman and now living alone in Vadodara, she has seen a lot, she says. She prefers to stay tight-lipped about her immediate family who did not attend her wedding. For now she is looking for a new place and a new job to stay on in Vadodara. When news of her marriage broke out, reporters descended on her house, clamouring for her soundbyte. “It was worse than being a celebrity,” she says. “My landlord wants me to vacate the house as soon as possible.”

Bindu began working at 17 and later dropped out of her journalism degree. She has worked in multiple roles till date, from a retail store worker to a placement consultant to dabbling in stock market and choreography to becoming a digital creator and writing and reciting poetry in cafes. Her embracing of the self has led her to question several crowd-pleasing habits, including shaving her armpits. She has learnt to be “the odd one out” in her rather uptight city.

Her Instagram account is often besieged by trolls whose biggest worry revolve around her sexual life. She lists the barrage of unsolicited warnings like how her fingers will get tired, how she will run out of vegetables or how she might need an extra hand, apart from other vile jokes on atmanirbharta. “I only have one answer for them,” she says. “Majority of Indian women don’t know about an orgasm. What would have I achieved by marrying the way they like it?”