This couple learnt all things new in Indian matchmaking 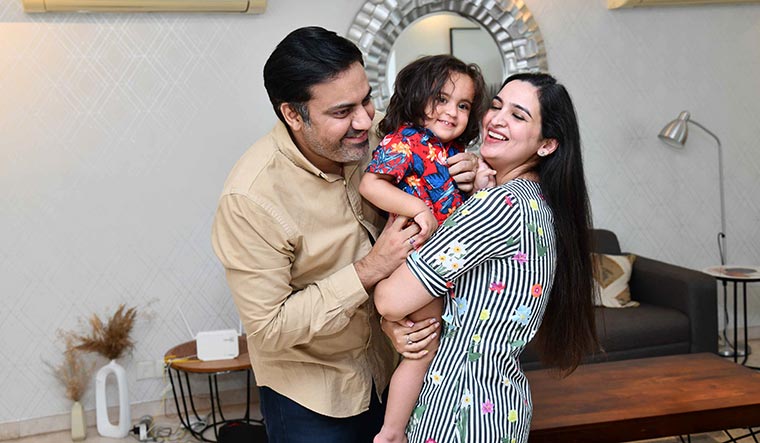 Priya Aggarwal, 33, made sure her potential partner got screened by her therapist.

In 2019, when a professional matchmaking service, MatchMe, fixed her up with Deepanshu Manchanda, 37, Priya had a clear set of expectations and non-negotiables, especially after a traumatic first marriage that ended in 2018. “Have you seen that show Indian Matchmaking? Where Seema Taparia was the matchmaker? A profile of one of the guys from the show had also come my way,” she says, laughing. “Well, I met Deepanshu through a similar boutique matchmaking firm. But I don’t think someone like Taparia would be open to divorcees.”

Their two-year-old daughter, Meera, prances around the sofa in a plush flat in Gurugram, while Deepanshu amusingly recalls the battery of background tests he had to undergo to prove his integrity to Priya. “Only lie detector and blood test didn’t happen,” he says, with a wry grin.

The pairing of Deepanshu, cofounder of Zappfresh, a meat delivery service, and Priya, a former corporate communications head and now an entrepreneur, will not fit into the traditional mould of an arranged marriage. No kundli-matching here or a dictatorial matchmaker calling the shots. There is no talk of dowry or caste or religion. But all the same, families are involved in selections, there is no protracted courtship period and finding a suitable partner does not come cheap. In the case of Priya and Deepanshu, it was Rs3 lakh for the matchmaker.

There is a middle path being taken here, a halfway house, almost like hyper-intentional dating where both sides have a very clean grasp over who they are and what they want. And, no one is being bombarded with a “buffet spread” of matches, as Deepanshu likes to call it. He did not even have the time to make a profile. He trusted his marriage consultant at MatchMe after a thorough briefing in his office.

Priya’s previous arranged wedding was all about boisterous joy and other people’s priorities. The second time was less noise and more clarity. In a way, her journey mirrors the way arranged marriages are evolving in India in certain sections of the population, where the focus is entirely on the needs of the girl and the boy even within an ecosystem of families and marriage brokers. “Therapy has helped me a great deal to know who I am and what I want. And it has given me the courage to put my wants across the table,” says Priya.

Arranged marriages continue to be the norm in India. In a 2018 survey, 93 per cent of 1.6 lakh married respondents said theirs was an arranged marriage. While popular matrimonial sites like Shaadi.com continue to offer a “buffet spread” of choices, a new set of matchmakers for the rich are doing things they believe are the way forward. “We are targeting a very different clientele which is more educated and progressive,” says Mishi Mehta Sood, cofounder of MatchMe. “Our work is more with people who have evolved and are not bound by caste and community considerations. So we have people from south India who would be open to considering matches from north India…. So it is opening up, but the change is slow.”