Exclusive: 'India stands poised on cusp of a major transition' 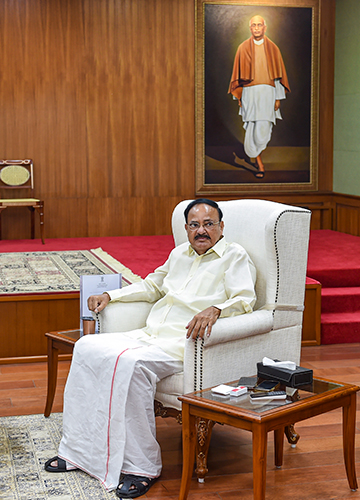 AS I LOOK BACK WITH a sense of gratification and contentment, I find it difficult to sum up my term as Vice President of India and Chairman, Rajya Sabha, in one defining phrase or expression. However, during this eventful chapter in my journey in public life spanning five decades, I travelled extensively to various parts of the country and interacted with people drawn from all walks of life. My travels and countless interactions with people representing diverse sections of the population served to reinforce the fact that today India is well and truly on the move. As the country celebrates Azadi ka Amrit Mahotsav, I, as a citizen of this great nation, feel proud to say that the new India that is now emerging, replete with growing competence and confidence, is an India proud of its rich cultural heritage, while moving forward resolutely to earn its rightful place in the comity of nations.

India today stands poised on the cusp of a major transition. In rural as well as urban areas, I could see Prime Minister Narendra Modi’s mantra of governance—“Reform, Perform and Transform”—in action, fast-tracking development in multiple domains. I see this paradigm shift in governance as a singular accomplishment worth highlighting because it has transformed the development trajectory of this great nation.

This is not to say that there are no challenges. Poverty, illiteracy, socio-economic inequities, gender discrimination, uneven development and the rural-urban divide, among other maladies, are issues that need to be countenanced. What I found uplifting is the enterprise and enthusiasm of the youth everywhere to be proactive partners in the mission of India’s development.

Throughout my tenure as the Chairman of the Rajya Sabha, I appealed to members to be guided by the mantra of “let the government propose, let the opposition oppose and let the house dispose”, as also “Debate; Discuss and Decide; Do not disturb.” I have always pointed out that dignity and decorum should be the defining features of the functioning of our parliamentary democracy.

While constructive criticism should be welcomed, there is no room for disruption, which is sadly, on the rise in our system today. Disruption and disorder mar the functioning of Parliament and reflect impatience and intolerance. Enlightened debates should influence policy and decision-making and ultimately lead to development.

It is my conviction that the distilled knowledge and wisdom of our collective civilisational consciousness finds expression in our mother tongues. As someone who takes immense pride in the country’s rich cultural and linguistic heritage, I have been a vocal supporter of the widespread use of Indian languages. As Chairman of the Rajya Sabha, I ensured that members could speak in any of the 22 languages listed in the Eighth Schedule of the Constitution.

An added achievement was that simultaneous interpretation service was provided in the Rajya Sabha leading to a greater use of Indian languages in the proceedings of the upper house. For instance, four languages— Dogri, Kashmiri, Konkani and Santhali—have been used for the first time since the Rajya Sabha came into being in 1952 and six other languages—Assamese, Bodo, Gujarati, Maithili, Manipuri and Nepali—have been used after a long hiatus.

The Covid-19 pandemic disrupted lives globally and India was no exception. In a gigantic, collective effort of waging a war against a deadly virus, our medical fraternity— including doctors, para-medical staff, health and sanitary workers—as also our brave police personnel, ASHA workers in villages, scientists, innovators, entrepreneurs, researchers and vaccine manufacturers worked tirelessly, racing against time to save precious lives. 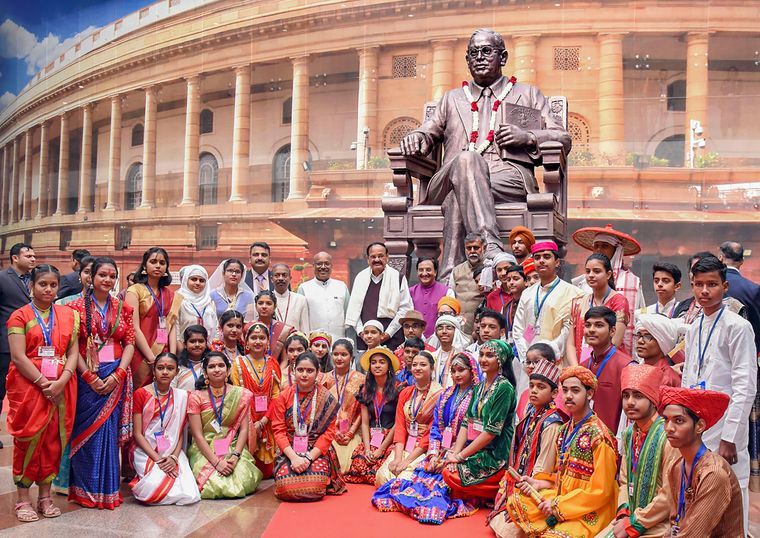 Unity in diversity: Naidu with students who welcomed him in 22 Indian languages on International Mother Language Day in February 2020 | PTI

Keeping in mind the safety of the members of Parliament and the large pool of employees during the sessions, I held prolonged consultations with the Speaker of Lok Sabha, Om Birla, and other officials. We drew up a detailed protocol, which was implemented from the monsoon session of Parliament of 2020. The initiatives taken to check the chain of transmission were widely appreciated by members of both houses of Parliament.

I have often pointed out how the concept of ecological protection is embedded in our DNA from time immemorial, as seen in our worship of rivers, trees and mountains, among other aspects of nature. In the backdrop of rising threats to the environment, I always counsel youth that, in order to save the planet, they must strive to protect nature and preserve culture for a better future.

On a parallel note, as someone coming from a family of farmers, I believe that agriculture lies at the core of the nation’s cultural fabric. The resilience of the Indian farmer can be seen in the manner in which he stood tall in the face of the devastating pandemic, notching up a record production of food grains. In my visits to universities, my interactions with farmers, as also scientists and researchers, I have emphasised the role agriculture plays in the development architecture of the country. I repeatedly stressed upon the need for closer interaction between farmers and agricultural scientists to help farmers turn agriculture into a more profitable and sustainable activity.

The progress of a nation hinges on the educational empowerment of women. I feel overjoyed when I see girl students at educational institutions prove their mettle and win gold medals. Over these five years, in universities and colleges across the country, I could see the progress we have made in girls’ education and women’s empowerment. This is reflected in women breaking the glass ceiling in multiple fields, including sports and games.

In my addresses to, and interactions with, students in various colleges and universities I have stressed upon the fact that education, especially higher education, is among the most powerful instruments of social change. I have tried to underscore the point that education holds the key to our presence at the global level in terms of economic growth, social justice and equality, scientific advancement, national integration and cultural preservation.

As I reminisce with satisfaction at my tenure in the second highest Constitutional office in the country, I am filled with optimism and a robust belief that India is well on its way to becoming a Shreshth Bharat, Sashakth Bharat and Atmanirbhar Bharat.

The author is former Vice President of India.