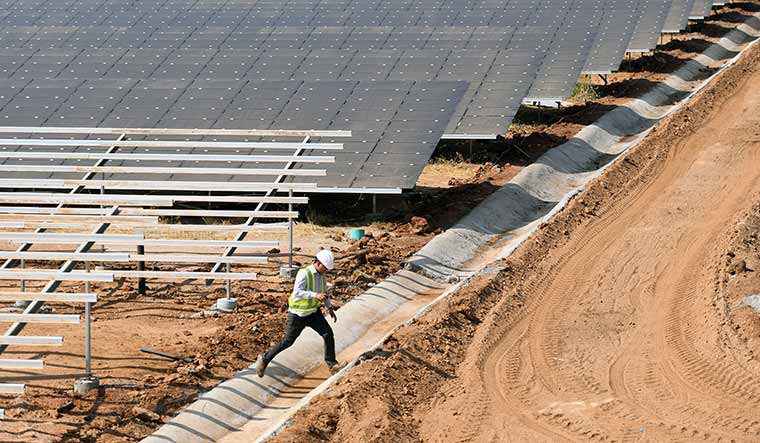 Powering the future: A solar field at Pavagada in Karnataka | Bhanu Prakash Chandra

THE SUN IS SHINING on a green future. Throw in the wind, the water and the sea, and you have a well-balanced and wholesome thali for climate action. That is, if India can de-addict itself from the lure of junk power from fossil fuels.

It may seem a no-brainer, with clean renewables like solar and wind energy scoring on any flowchart possible over the polluting coal and natural gas. Yet, India has a difficult choice to make—should it give up a cheap source of energy like coal or make efforts to re-track towards a sustainable future with renewable energy.

The government has been pushing the envelope. First it set in 2016 a target of 175 GW by 2022. A target of 450 GW was set for 2030, which was recently upped to 500 GW. Vision is one thing; reality is another. With less than five months in hand, only 114.07 GW of the target of 175 GW has been achieved. Bhagwanth Khuba, minister of state for new and renewable energy, told Parliament a month ago that an additional capacity of 60.66 GW power plants were at various stages of completion.

A bigger challenge would be the elephant in the room—coal. The two bouts of coal shortage and power outages across states in the past 10 months exposed how India is still dependant on coal to produce electricity. Renewable energy’s share of India’s power bouquet is around 40 per cent. “We can’t ‘switch off’ the global demand for fossil fuels overnight. It is necessary to maintain energy security as we make the transition to net zero,” said Anish De, global head for energy, natural resources and chemicals at KPMG. “[But] renewable energy has created substantial capacity in India. A large supply base has been created with credible players, the power markets have evolved and supported new business models and greater flexibility.”

The added impetus from the government has also helped. Prime Minister Modi has set India on a feasible roadmap towards reducing coal dependency and net zero carbon emissions by 2070.

“There have been some uncertainties, but the government by and large has been proactive,” said Manish Gupta, senior director, CRISIL Ratings. “That has led to good growth in the last few years.” With policies for green hydrogen and EVs, a production-linked incentive scheme for making solar photovoltaic cells, introduction of sovereign green bonds in public sector projects, and ambitious targets for ramping up renewable energy production, the Modi government is ensuring that the future is green.

The only way for renewables is forward. Everyone from the Ambanis and the Adanis to startups like ReNew Power are now planning mega investments, not to forget the traditional biggies like NTPC and Tata Power, who are all also making the shift. A report by KPMG on funding over the April-June period showed that, while global VC funding has been dropping, renewable energy businesses like electric vehicles, battery technologies and hydrogen were increasingly getting money.

“India can emerge as a major manufacturing and technology development hub for renewable and smart technologies,” said De. “We missed it largely in solar and cannot afford so for emerging cleantech. The government is taking measures, and would need to work with the private sector to unleash India’s tremendous potential.”

COMPARISONS GIVE a sense of perspective. That is why they are imperative when you trace the journey of a nation from a colonial leftover to an economic powerhouse. India was an economic mess when the British left in 1947. Much as our nation builders tried to create systems and institutions, they were constrained by the limited resources available to a fledging economy, and a volatile world order. Still India did well on many fronts and not so well on some.

It has clearly been a mixed bag. India’s per capita GDP, for instance, is about a fifth of China’s now. It was just half of that of the eastern neighbour in 2004, and about the same in 1990. Clearly, we are not growing fast enough. But you compare it with the British rule—while an Indian’s income hardly improved for almost 120 years before independence, it went up 10 times in the past 30 years.

India is now the world’s sixth largest economy (third, by purchasing power parity). While it reflects the strides the country made in the past three decades, it is also an indicator of the tremendous potential it holds. That potential is more evident than anywhere else in information technology, and the new poster boy of India’s digital prowess, UPI, has brought in a paradigm shift in the payment segment.

UPI is just one of the many game changers that will lead India to a crucial period when it will try to lift a big chunk of its population out of poverty. These initiatives offer not just better lives but also the promise of a better future.