Indian manufacturing is on the rise, but beating China will be tough 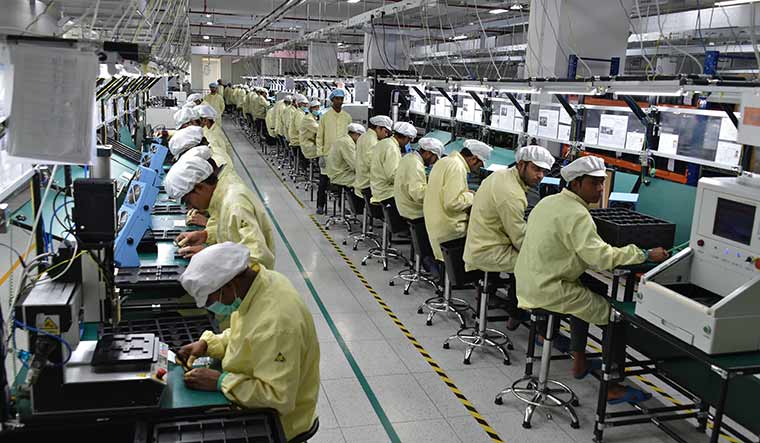 SAME SCRIPT, different cast. Before ‘Atmanirbhar Bharat’ and ‘Make in India’ tried to sex up manufacturing, a half-naked fakir did it with one of the simplest, yet unforgettable, slogans in Indian history—swadeshi.

The times are changing, so is the cast; but the script remains the same. Seventy-five years since independence and under a new world order, India’s manufacturing sector still needs a leg-up, after all the Five Year Plans, National Manufacturing Policy (during UPA 2) and ‘Be Indian, buy Indian’ clarion calls. Can Atmanirbhar Bharat and its production-linked incentive (PLI) scheme, which offers incentives for companies setting up manufacturing in specified sectors in the country on an incremental basis, cut away from those that went before? And can it breathe life, and roar, into the nuts-and-bolts lion of ‘Make in India’?

Many believe it is possible. “Even as the world is grappling with a host of economic and geopolitical issues, India is at the cusp of opportunities which must be leveraged,” said Deepak Sood, secretary general of the Associated Chambers of Commerce and Industry of India. “We are seeing quite a bit of success [of the PLI scheme] in sectors like electronics and automobiles. We need to ramp up the campaign.”

India’s manufacturing dilemma is an old woe. Since the colonisers arrived, India has been more of a consumer than a producer of manufactured goods. Post-independence, governments tried to deal with it with various strategies—Nehru imposed socialism and the ‘License Raj’ and Indira tried nationalisation, while Morarji Desai’s industries minister George Fernandes threw out Coke and IBM. After a near-bankruptcy forced P.V. Narasimha Rao’s finance minister Manmohan Singh to free up the market in the early 1990s, the economy boomed. However, India still imported more finished goods than it exported, and the deficit kept growing.

While this did not matter for much of the 1990s and the 2000s, when the economy and trade boomed, the warning lights started blinking once a series of economic disasters struck—the 2008-09 global financial meltdown and its aftereffects, demonetisation, the slowdown of 2018-19 and then the pandemic, and now the Ukraine war and the fears of a looming global recession. Rounding up the litany of woes has been India’s increasing friction with China, and the realisation of its over-dependence on the big bully neighbour.

The Narendra Modi government’s push for self-reliance was insistent enough with Make in India right from 2014, but it turned into a relentless one with Atmanirbhar Bharat after clashes with China in 2020. A bedrock of Modi 2.0’s economic policy, it aims to reduce the dependence on imports and attract global manufacturers to set up production bases in India. “It is creating a robust manufacturing base in the country, which is enabling India to compete on an equal footing globally,” said Union Commerce and Industry Minister Piyush Goyal a few weeks ago.

While the push has been relentless, there is also a school of thought that India should focus on the services sector, where it has always done better. According to the World Bank, manufacturing contributed to just 14 per cent of value to India’s national income in 2021, while services contributed around 50 per cent. “India should focus on building (human) capacities, not chips,” said former RBI governor Raghuram Rajan, an ardent detractor of ‘imitating China’s path’, in an interview a few weeks ago. “We should focus on what our strengths are.”

But with the might of the establishment behind it, Indian manufacturing might have a chance this time around. Registration of manufacturing companies has been at its highest levels in the past few years, according to a report by Emkay Investment Managers. It says this has the potential to add 4 per cent to the GDP. “After a long hiatus, manufacturing companies are likely to be the wealth creators, leaders of the next rally in the markets,” said Vikaas M. Sachdeva, CEO of Emkay.

The PLI scheme now covers 14 sectors, with an outlay of Rs2.4 lakh crore in incentives over the next five years, and it has already roped in big names. Those signing up for setting up production plants for anything from air conditioners to solar panels and semiconductors include the likes of Samsung, LG, Vedanta, Adani, Jindal and Bluestar. Apple is estimated to make iPhones worth Rs47,000 crore in India through its vendors, creating 30,000 jobs.

The pandemic was the plot twister in this script. Many sectors restructured their sourcing and manufacturing footprints to “capitalise on India’s advantages in raw materials, talents and entrepreneurship,” according to Arjun Bajaj, CEO & founder, Daiwa, and director, Videotex. “If we can specialise and build internationally competitive manufacturing centres, it offers India the most important chance to boost economic growth and job creation this decade.” This script could well have a happier ending.