India uses more groundwater than US and China combined 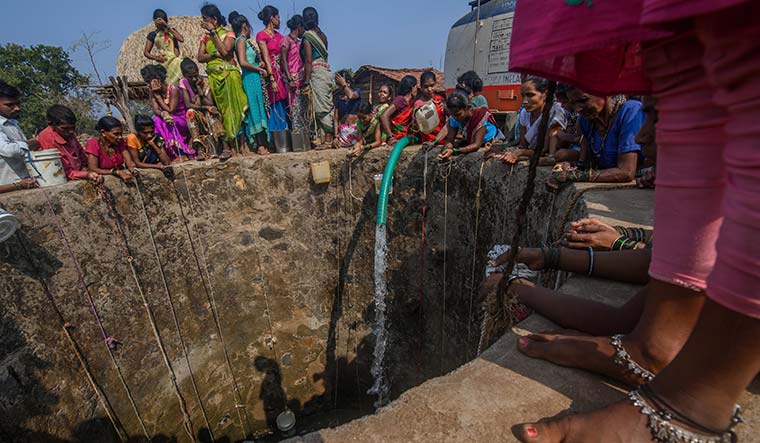 INDIA IS THE largest user of groundwater in the world. With an annual extraction of 244.92 billion cubic metres (in 2020), India uses more groundwater than the US and China combined. Today, however, 63 per cent of Indian districts are facing issues related to falling groundwater levels, which also has a direct correlation with poverty rates. It is estimated that poverty rates are 9 to 10 per cent higher in districts where groundwater tables have fallen below 8m.

Recognising that the unregulated use of groundwater is draining India dry, the Union government introduced two major initiatives in the last decade. The first one was the National Project on Aquifer Management (NAQUIM) launched in 2012. The principal objectives of NAQUIM are to detect and map aquifers, estimate the groundwater potential and promote groundwater management at the aquifer level. The programme envisaged a paradigm shift from “groundwater development” to “groundwater management”. Eshwer Kale, thematic lead of water resources development and governance at Watershed Organisation Trust (WOTR), however, said aquifer maps generated as part of NAQUIM were unsuitable for making scientific and social interventions at a village level. “This is because these maps are generated at the scale of 1:50,000.”

In 2019, the Union government introduced Atal Jal, another scheme to improve groundwater management through community participation, in seven states. The five-year implementation of the programme—with a total allocation of Rs6,000 crore—started in 2020-2021.

Kale said while projects like NAQUIM were well-intended, the challenge was to demystify the unseen aquifer to the rural population and make them responsible for managing it. Since groundwater is not visible to naked eyes, groundwater resources are often subjected to unscientific extraction and overexploitation. Kale and his team developed a tool called CoDriVE—Visual Integrator, which helps villagers visualise water reserves lying beneath the ground. “The model helps rural populations to do water budgeting,” said Kale. “The precise estimation of groundwater helps farmers grow suitable crops and plan their irrigation schedules.”

Taking traditional knowledge and local topography into account is crucial while implementing groundwater recharging techniques. Laporiya, a remote village located on the edge of the Thar desert in Rajasthan, is a good example. The village, which gets hardly 300mm rainfall annually, has a unique system for recharging groundwater. The village used to experience severe drought till a few decades ago. A group brought together by a school dropout, Laxman Singh, in 1977, to repair a small stone bund, changed the fate of the village. By 1984, the bund became the water source for 1,800 acres.

In 1986, Singh founded an NGO named Gram Vikas Navyuvak Mandal Laporiya (GVNML) and launched a system to recharge groundwater levels. It consists of a series of square pits with mud walls. The small mud walls work as water-harvesting structures. The system slows down the flow of rainwater and gives it enough time to seep into the ground, thereby recharging underground water tables. The excess water gets diverted to nearby ponds.

“Our approach is to consider the original land use pattern and recharge groundwater,” said Jagveer Singh, CEO of GVNML. “When we started working on it, we involved the local community also. We developed this technology in a participatory manner.” He said the model could be replicated in most parts of India, except in hilly areas and places with heavy rainfall. “Our agriculture is flourishing,” he said. “We have sufficient drinking water even when other villages experience drought. We even have surplus water to supply to nearby villages.”