Why we should worry, and not panic, about monkeypox

Behaving responsibly and avoiding stigmatisation can help contain it 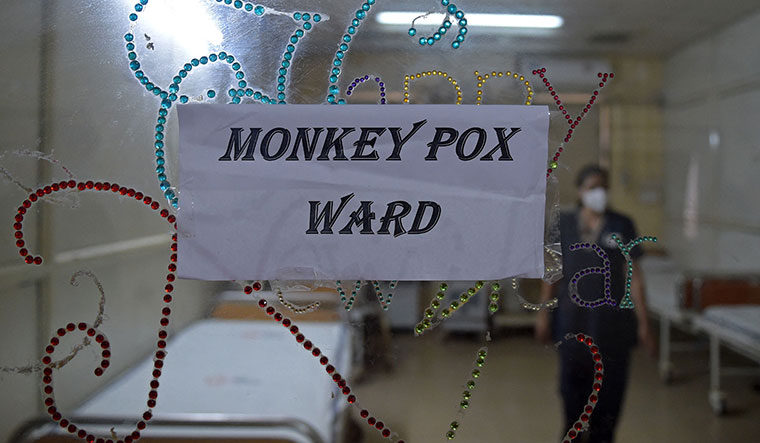 Prep up: A health worker inside an isolation ward built as a precautionary measure for monkeypox patients at a civil hospital in Ahmedabad | AFP

Decisions and announcements might well be outpacing the speed at which monkeypox is spreading. The World Health Organization (WHO) recently declared it a “public health emergency of international concern’’. More than 75 countries from five regions in the world have reported 17,000 cases of this zoonotic viral infection in 2022. This does make it an ‘outbreak’ although, despite the geographical spread, it is still not a ‘pandemic’’. India has four confirmed cases—three in Kerala, one in New Delhi.

With the experience of the Covid-19 pandemic, it is now clear that in a globally connected world, local outbreaks can spread within days to different parts of the world. Despite every check, like screening of passengers, the infection will spread, though its speed can be curtailed. For instance, a traveller in the pre-clinical stage of infection may not exhibit symptoms. Again, the very measures that are supposed to stop the spread of infection may induce people not to reveal too many details that could hamper their travel plans, or worse, put them under prolonged quarantine.

The association of the disease with homosexual relations could well become a reason for people not to report symptoms, fearing stigmatisation. A recent study involving more than 500 cases between April and June across 16 countries notes that 98 per cent were homosexual or bisexual men, 41 per cent were also HIV positive, and that in 95 per cent of the cases, the spread could be linked to sexual interaction. While identifying communities where the spread could be greater is important, there is a huge risk of putting certain communities under the social spotlight. The WHO has carefully worded its advisory: “Some cases have been identified through sexual health clinics in communities of gay, bisexual and other men who have sex with men. It is important to note that the risk of monkeypox is not limited to men who have sex with men. Anyone who has close contact with someone who is infectious is at risk. However, given that the virus is being identified in these communities, learning about monkeypox will help ensure that as few people as possible are affected and that the outbreak can be stopped.’’ 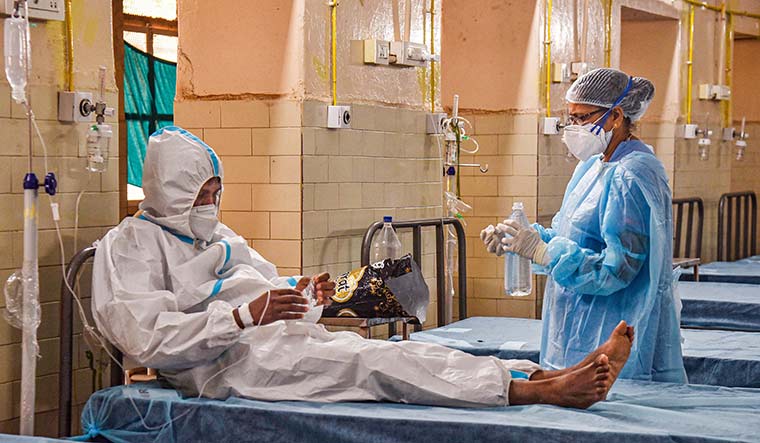 Keeping watch: A health care worker inspects a patient who showed symptoms of monkeypox after returning from abroad at the Government Fever Hospital in Hyderabad | PTI

Stigmatisation is a risk, agrees Dr Mrinmayee Bhushan, chemical and biological security analyst and director of Mindfarm Novatech. “But the doctor-patient confidentiality should take care of it to some extent,’’ she says. In present times though, it is easy to leak information from other sources. For instance, reports about a recent suspected case in Delhi’s LNJP hospital—the person came from Himachal Pradesh—say he attended a “stag party’’. The innuendo is clear. Experience with HIV cases shows how entrenched stigmatisation can be, even when it is known that the disease does not spread through touch. In the case of monkeypox, while the spread is slow, it can spread through close contact, and family members and health care providers, too, can get the infection. “Not talking about it publicly also has a risk for further spread of the disease,’’ adds Bhushan. 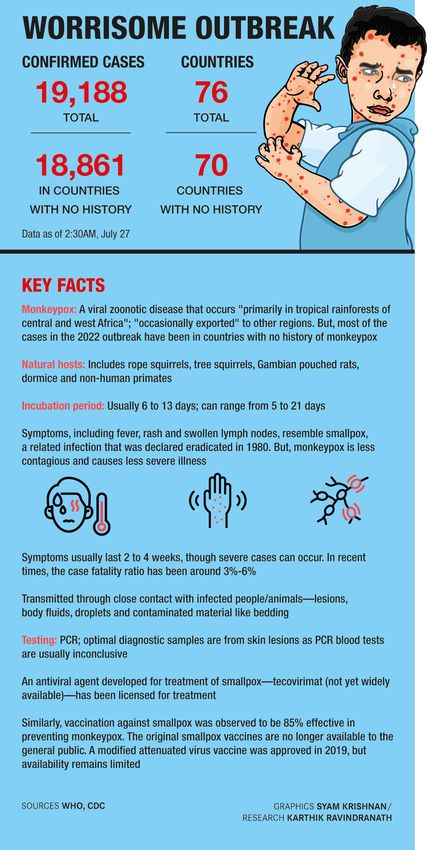 While the present outbreak is spreading through humans, monkeypox also jumps from animals to humans. In fact, every new outbreak is traced to an animal reservoir. The US has also reported its first case in a pregnant woman.

Monkeypox has traditionally stayed within central Africa. Despite its name, its original animal reservoir is not known, though it is believed to be found in many animals, like primates, porcupines and rodents. The only outbreak outside Africa before the present one was in 2003, when 47 people in the US fell ill after contact with pet prairie dogs. The outbreak was finally traced to a consignment of animal imports from Ghana.

While the spread itself is an issue, experts say that the disease is self-limiting, and therefore, there is not much reason to panic. The case fatality may seem high when compared with Covid-19. Monkeypox fatality is up to 11 per cent, though with good management, these days it is between 3 to 6 per cent. Of the around 75 deaths so far, almost all are within Africa.

Covid-19 has a global fatality rate of over 3 per cent. However, its spread is rapid, the morbidity rates are higher, and given that it is a new virus, doctors are still learning about its long-term effects. Monkeypox has been known since 1958, the first reported cases come from the 1970s. There have been outbreaks in the past, and there is already a treatment and vaccination regimen in place, though that is constantly updated as new science comes up.

So how it is that the WHO was so quick to declare the disease an international public health emergency? “When dealing with a big country like China, which is the suspected origin of an infection, organisations are very cautious about repercussions. They do not have to worry too much about antagonising countries like Congo, from where monkeypox originates,’’ says virologist Jayaprakash Muliyil. Given that from Africa, the virus has led to outbreaks in the developed world, global health organisations are more alert.

The Covid experience has shown that there is always a need to have infrastructure and a mechanism to deal with a spreading infection. NITI Aayog member (health) Dr V.K. Paul said there was no need to panic, but one must report in time if they spot any symptoms. India’s disease surveillance system, he said, is re-energised to investigate more such cases and diagnostic laboratories are also being readied.

India has dealt well with outbreaks in recent years, like the Nipah virus. States that have a higher number of international passengers need to be better prepared with isolation centres. “Apart from the usual guidelines to the medical fraternity regarding differential diagnosis, routes of transmission and treatment, there should also be guidelines on the genomic findings of current strains found in India as well,” says Bhushan.

During the present outbreak, while the cases within central Africa are few, the spread across the UK, US, Brazil, Canada, and Germany is already in the thousands. While these countries are already talking about vaccines, especially for vulnerable populations, the WHO has made it clear that vaccines alone are not enough, responsible behaviour is as important. Paul echoes the sentiment in his statement: “We have to play responsibly.”