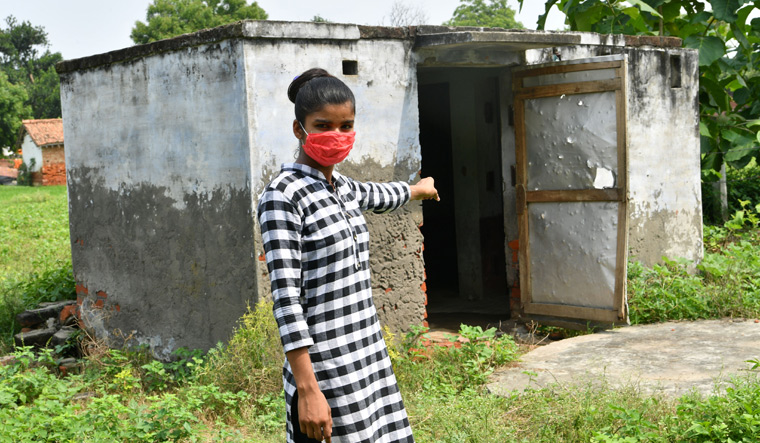 In a shambles: Laxmi points to the toilet at Maa Rampyari Memorial Balika Intermediate College in Harhua, Varanasi | Arvind Jain

In his first Independence Day speech as prime minister in 2014, Narendra Modi promised to build toilets in all schools across India. This ambitious target was to be achieved in a year, especially to reduce the dropout rate of girl students. Slogans like ‘toilets before temples’ had become the buzzword.

Seven years on, the figures on toilets built is not all too disappointing, as per the fact sheet presented in Parliament in July in response to a query on water and sanitation facilities in schools. In 2019-2020, 9,88,293 of 10,32,569 government schools listed across states and Union territories (including Ladakh) had separate toilets for women and 10,01,788 had drinking water facilities.

But the standard for school sanitation should always be judged on the metrics of usability and functionality of toilets for adolescent schoolgirls. Experts underline the crying need to maintain school toilets, especially with schools reopening amid fears of a third wave engulfing the under-18 cohort. Prevention of Covid-19 and other transmissible diseases in schools needs more than masks, sanitisers and social distancing. Essentials—like soap, steady water supply, drinking water, cleaning staff, separate urinals, disposal of solid and liquid waste, ramps, handrails and wide doors for children with special needs—can no longer be glossed over.

“In terms of sanitation infrastructure, schools in Kerala and Tamil Nadu are standouts,” says Raman V.R., head of policy at WaterAid India. “In Chhattisgarh, Telangana, Andhra Pradesh and West Bengal, the role of panchayats is better.” It is the unrecognised, unaided private schools that always slip through the cracks, he says. They offer minimal infrastructure and are more problematic than government schools.

Take, for instance, the schools that Laxmi and Sweta go to. The two friends are enrolled in private schools in nearby villages of Varanasi district; they are both in class 12. Laxmi goes to Maa Rampyari Memorial Balika Intermediate College in Harhua and Sweta to Sri Lalta Prasad Adarsh Inter College in Tendui. With no steady work, their fathers struggle to pay the monthly fee of Rs200. But Laxmi and Sweta are both determined to make it through; both rejoined school in August.

“They do not even teach maths in mine,” says Laxmi. Sweta has it worse. “There are no lights or fans in my classroom,” she says. Laxmi’s school is a dark, empty brick structure, just a kilometre away from a model government school adorned with colourful murals. “There is one hand pump outside my school, but there is no water in it,” says Laxmi. “A dai fetches a pail of water from the government school. This bucket of water is used by all the girls in my school. We are some 250 students.”

On a humid afternoon, just outside Laxmi’s school, a mohalla class of uniformed primary school students from the government school is in session under a tree. Each student has a tablet. The teacher taking the mohalla class also teaches Hindi in Laxmi’s school. “Although it is shut, I have the keys to the washroom in the government school nearby. I have never used the toilets in Maa Rampyari,” says the teacher. “Hamara school Ram ko pyara ho gaya (My school is as good as dead),” Laxmi cheekily remarks. “During periods, most of us do not go to school.” A shed doubles as a toilet here.

Sweta takes us to her “horror show” of a school. There is no board outside. There is a hand pump here, too, but it ejects sand mostly. Behind the dusty, cobwebbed classrooms strewn with desks, there is a tin shed shrouded in foliage serving as women’s washroom. Sweta pulls a face. “Nobody goes inside the two washrooms. Usually it is so unclean that the teachers and students do everything outside,” she says. On the way out, she runs into her principal, standing with his arms akimbo near the school gate. “I do not want to be caught complaining,” says Sweta, as she quietly leaves the premises. “I somehow managed to complete my class 11 here. There is one more year. I really want to keep studying. My father keeps encouraging me to get good marks.”

Fortunately, their learning is not restricted to the schools. At a makeshift stitching centre in Gaharpur village, Swati Singh runs the Muheem Welfare Society, an NGO. She has drawn the outline of an ovary on a blackboard. Sweta and Laxmi have learnt a good deal about menstruation hygiene here and how to stitch cotton pads. Singh, 27, too, had dealt with urinary infections in her school days. She refused to go to school after class 10. “I was better off studying at home. I could not have used the toilets in my school if I needed to,” she says.

Singh has not heard about the recent campaign for a three-day ‘period leave’ by Uttar Pradesh Mahila Shikshak Sangh, a newly formed organisation of women teachers. Neither have her students. “But why should we have one?” asks Singh. 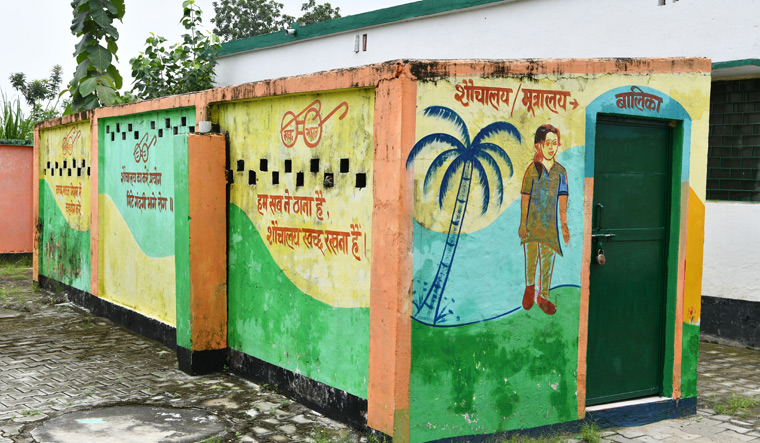 Writing’s on the wall: A toilet for girls at the government primary school in Jayapur, Varanasi | Arvind Jain

The latest independent figures on school sanitation are hard to come by as schools have remained largely shut in the last one-and-a-half years. The 13th Annual Status of Education Report Rural, a citizen-led survey released in early 2019, revealed that 22.8 per cent rural schools had unusable toilets in 2018. According to data released by World Health Organization and UNICEF Joint Monitoring Programme on WASH (water, sanitation and hygiene) services in August 2020, only one in three schools in India had the requisite facilities in 2019. The renewed debate around period leave is an effective gateway to understand the state of sanitation in rural schools.

“If all working women, including cops and doctors, also demand period leave, one half of the population will go on leave,” says Shalini Gupta, not without a touch of sarcasm. She is one of eight teachers at a government primary school in Rasulpur Ojhaniya village in the Muftiganj block of Jaunpur district. The previous school she worked at was 25km away, but had clean toilets. She, however, often had to use the backyard of strangers to answer the call of nature on her long journey to work. These pit-stops gave her urinary infections. She now teaches at an English medium school in Muftiganj, which is closer home—17km. But the cleanliness of toilets here leaves much to be desired. The safai karamcharis hardly show up. She often cleans the toilet herself. At times, snakes slither in from the farm behind during monsoons.

“Period leave is not a solution for bad toilets,” says Gupta. “It is not going to solve problems of absenteeism or dropouts. It is not like we do not have to do any house work during periods. We should not be talking about equal rights if we ask for period leave. Please let us not make it a weakness. The ones who need it can apply for sick leave.” What she wants is sanitary pad vending machines on remote rural stretches.

According to Arundati Muralidharan, manager of policy (WASH) at WaterAid, period leave can be counterproductive to girls’ education if it is not segregated from individual medical problems that cause severe menstrual pain. “We need to unpack it very carefully and understand what it means and who needs it and what purpose it will serve,” she says. “There are some states where schools have come up with rules like a separate room where they have pads, some medicines and a mattress [for] students [to] lie down, perhaps miss one class and feel better. Like the ‘pratishtha rooms’ in Maharashtra. The teachers are right to demand facilities in school…. But this cannot be equated with period leave. Teachers need to be clear what they are asking period leave for.”

For Sai Damodaran of Gramalaya, an NGO, schools in Kerala, Tamil Nadu, Andhra Pradesh and Telangana are better prepared to ensure effective WASH facilities. He, however, adds, “Electronic disposal of used sanitary napkins is not functional in a number of schools here. Urinals need to be repaired and renovated. During lockdown, some people may have opened toilets to use them secretly, leaving them in a poor condition.” He has built 750 school toilets with disposal incinerators in rural Tamil Nadu, Telangana and Andhra Pradesh.

Lack of proper management of resources has always raised a stink. “The government’s policy now must include a cleaner or a cleaning facility for school toilets,” says K.P. Rajendran, CEO of Society for Action in Community Health, an NGO, that has constructed toilets in over 250 government schools in Punjab and Meghalaya under HDFC Bank’s CSR initiative. “It has become imperative now to keep a budget for everyday cleaning. The cleaning assistant’s salary is not part of the school budget. They get a maintenance allowance of Rs10,000-Rs20,000, which is not used for cleaning toilets.”

The link between sanitation and education of girls is well established. This opportunity for repairing the real issues should not go down the toilet.