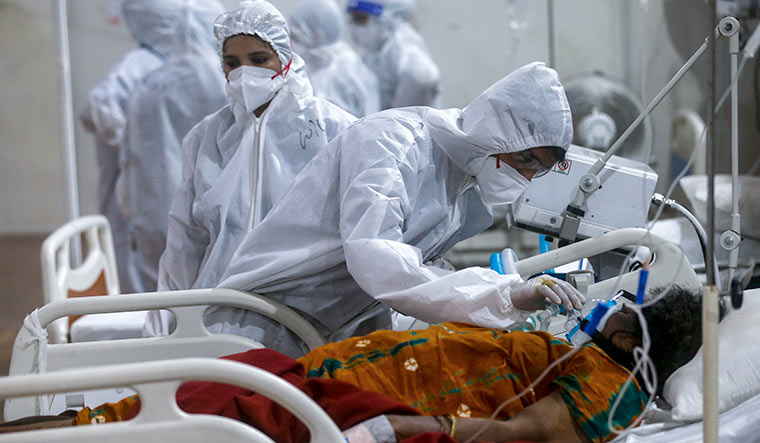 Need for intervention: A health worker adjusts the oxygen mask of a patient in Mumbai. The Supreme Court has appointed a task force to coordinate oxygen allocation and distribution across the country | AP

Any overzealous, though well-meaning, judicial intervention may lead to unforeseen and unintended consequences...”

This was part of the Centre’s recent submission to the Supreme Court when it was asked about the differential vaccination policy across age groups in the country. As the second wave of the pandemic raged across India, and caught the executive with its pants down, the judiciary stepped into the vacuum. The apex court and several High Courts have been passing orders to ensure better management of the pandemic. Whether it is vaccination or bed allocation, availability of oxygen or the drug tocilizumab, some judge has passed a stricture, told an authority to “beg, borrow, steal” or pulled up those in-charge for contempt.

Here is a sampling of what has been happening across virtual courtrooms over the past few weeks: The Allahabad High Court asked the Uttar Pradesh government to fix a “minimum” ex gratia of Rs1 crore for every official who succumbed to the pandemic because of panchayat election duty; the Rs30 lakh the state government had announced was too little. The Kerala High Court ordered a ceiling on charges in private hospitals for Covid-19 treatment. The Delhi High Court has been almost micromanaging pandemic management, fixing oxygen quota and distribution. It even issued a contempt notice to the Centre on the oxygen issue, which the Supreme Court dismissed. The Uttarakhand High Court pulled up the state government for allowing the Kumbh Mela to go ahead against scientific advice, and then, for not following standard operating procedures.

The courts’ intervention began as a response to an immediate problem. Over time, however, the courts have found themselves in territory where they have neither scientific nor administrative expertise. As one lawyer said, there was a situation where lawyers, and not medical experts, were comparing the benefits of dexamethasone over remdesivir.

So, has the judiciary waded deep into a mire that even medical and administrative experts are wary of?

When it came to the distribution of vaccines, the Centre finally made a stern submission: “In the context of a global pandemic, where the response and strategy of the nation are completely driven by expert medical and scientific opinion, there is even little room for judicial interference.”

It added that, in the absence of administrative experience or expert advice, such interference could leave the doctors, scientists, experts and executive little room to find innovative solutions on the go. 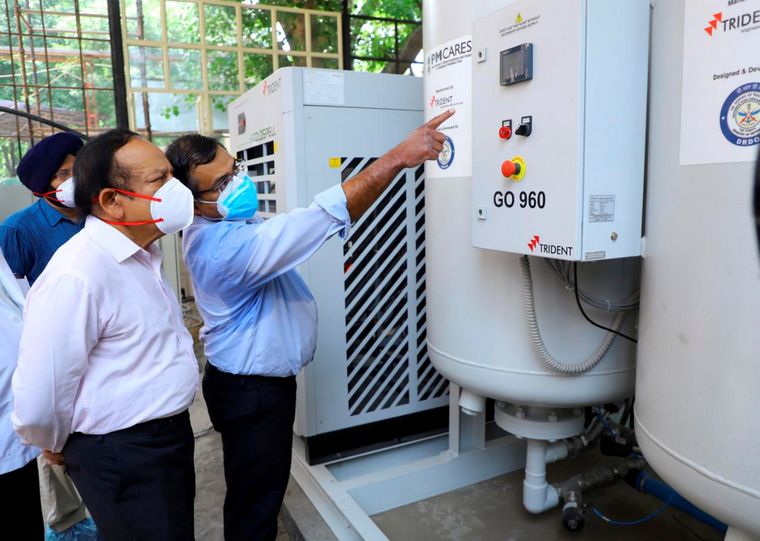 However, the fact remains that, had the government not messed up the vaccination programme, there would not have been this need for the courts to ask questions. “The Centre seems to be right,” said former Supreme Court judge K.S. Radhakrishnan. “Administration is the job of the elected government. The Supreme Court cannot deal with highly sensitive and technical issues as it does not have the machinery for it.”

Has the judiciary overreached? Is it now impeding pandemic management? “When there is non-governance, it is the obligation of the courts to step in. There is complete and utter breakdown of government machinery,” said senior advocate Gopal Sankaranarayanan. He, however, conceded that “it is a different matter whether they can provide solutions that are implementable”.

A senior advocate involved in several Covid-19-related litigations said that while judicial intervention had helped in many instances, in many others, the orders were vague. She pointed to one observation of the Delhi High Court on stopping the black-marketing of lifesaving supplies. “How will the court monitor this?” she asked. “The government will just submit some more reports and there is no way of cross-checking...”

Again, when authorities said they were short-staffed because of the pandemic, it meant there was no way to implement any orders. Another court observation: “Ensure a controlled reopening of the city.” This depends on what the perception of “controlled opening” is. A 50 per cent bus and metro occupancy might be “controlled” for one official, but another could still call it a super-spreader decision. 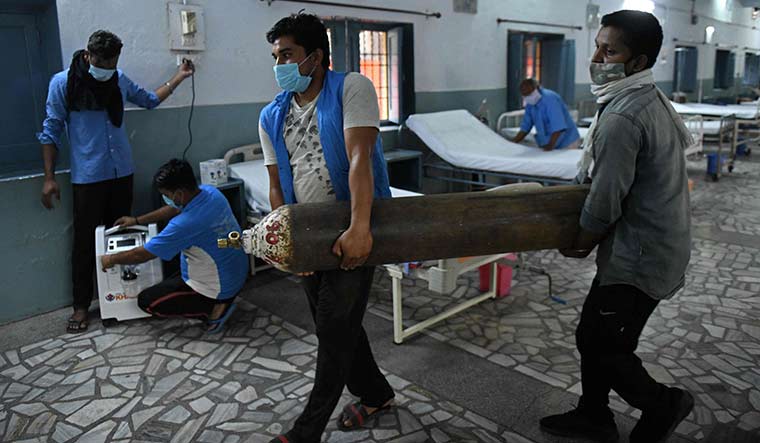 Also, is there any point in holding up officials to contempt at this stage? As senior government officers asked, will the problem be solved by removing or fining the health minister? Sankaranarayanan, though, said babudom gets into action when there is the fear of jail or penalty.

In their dealing with the oxygen situation, the courts might even have created more problems than they solved. Their decisions on fixing the quota that Chief Minister Arvind Kejriwal demanded for Delhi—700 metric tonnes—resulted in states like Tamil Nadu and Karnataka also seeking judicial intervention for quotas. Clearly, the messaging that went out was that the crying child gets the milk, or rather, oxygen! The Supreme Court later appointed a 12-member national task force to coordinate oxygen allocation and distribution across the country. This created another layer of bureaucracy at a time when officials were already stretched in securing supplies from overseas. However, it brought about a level of transparency that seemed missing. The move would also ensure that states that have not bawled about oxygen shortage are not denied their quota. Perhaps, the task force should have been instituted before conceding Kejriwal’s demands, said the senior advocate.

Home ministry officials pointed out that the task force was only one aspect of a national plan; it had to be followed up by state-, district- and block-level planning for pooling resources and for coordinating with several ministries. This requires the involvement of medical experts, administrators and political leadership. The courts can act as checks and balances, but their role should be advisory, letting the executive take the implementation decisions.

There is no denying that the pandemic is an extraordinary situation. Thus, even as pendency of other cases was high, the judiciary zealously tried to ensure justice to citizens. Not all cases, however, have been in the public interest. Many hours have taken up addressing petitions by individuals. There was the case of a lawyer who wanted a bed allocated for a seriously ill relative, and the court had to say that it was not possible to intervene at this individual level. Some individual litigations, however, have had benefits for the larger community. The Delhi High Court ordered “transparent” distribution of tocilizumab, following pleas of two patients who were prescribed the medication but were unable to procure it. The proven efficacy of this drug is another matter altogether.

But even the judiciary has a limited reach. This was clear when the Allahabad High Court’s order to the Uttar Pradesh government to consider a state lockdown was returned with the answer that yes, it was considered, but it was not needed. The Supreme Court sided with the state government on this.

There is also the flipside of going to court for resolutions. The Delhi government, which effectively used the judicial route to secure oxygen supplies, was not too happy with the apex court’s decision to audit the usage of oxygen allocated to the states. The Centre had been repeatedly saying that it was not a supply issue in Delhi as much as a distribution one, and that the state government had not provided the wherewithal for it.

The courts have been accused of judicial overreach many times since the pandemic began. However, their involvement has not always been consistent. It has ranged from impractical decisions to even not addressing some pressing issues. Last April, the apex court first ruled that Covid-19 testing should be made free across government and private labs, but when the private sector pleaded against the unsustainability of the decision, it ordered that those covered under Ayushman Bharat or any other category of economically weaker sections would be entitled to free tests. This was at a time when India did not have enough testing facilities.

Also, while the Allahabad High Court recommended Rs1 crore ex gratia to families of deceased poll workers, the Supreme Court last year did not show the same alacrity in dealing with the plight of migrant workers returning home during the lockdown. Though the exodus began in March itself, its orders to the government on their relief and rehabilitation came months later. In fact, in April, then chief justice S.A. Bobde refused to pass any order on payment of migrant workers during the 21-day lockdown, saying policy decisions were the prerogative of the government and that “We do not want to supplant the wisdom of the government with our wisdom.”

With inputs from Soni Mishra and Namrata Biji Ahuja