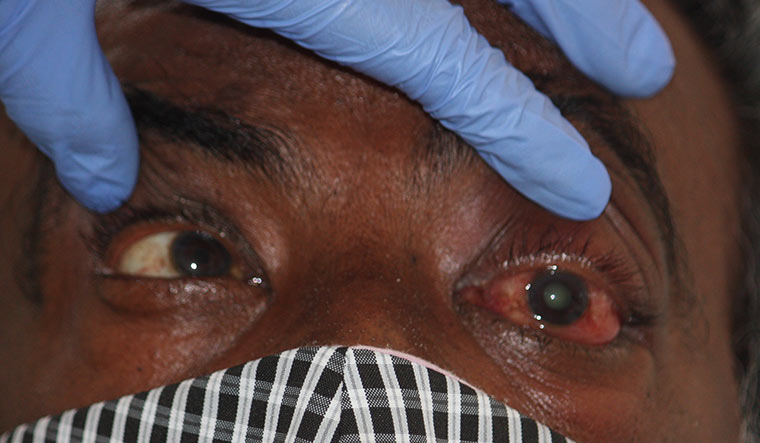 Keep an eye: Mucormycosis (black fungus) invading the left eye of a patient.

Lokesh Kumar, 70, from Bengaluru, was on steroids after being diagnosed with Covid-19. He had no history of diabetes and was under home quarantine.

Kumar’s condition improved in two weeks. “However, he developed a one-sided nose block, and, gradually, there was a swelling on the right eye. Over the next three to four days, Kumar’s vision was deteriorating. He was unable to count fingers even one foot away from his face,’’ said Dr Susheen Dutt, consultant ENT specialist at Fortis Hospital, Bannerghata Road, Bengaluru.

Kumar was diagnosed with mucormycosis. “He already had significant progression of the problem observed on the MRI scan. After his right eye was removed, he underwent radical sinus debridement. This was followed by aggressive anti-fungal treatment in the form of intravenous amphotericin-B. Kumar has managed to survive and is getting discharged on day 14,’’ said Dutt.

The pandemic has led to an increase in the incidence of mucormycosis; many of them in Mumbai. “We haven’t measured the incidence, but we are seeing a surge in cases…. Patients are being pumped with steroids. When they are given large amounts of steroids, their immunity is compromised. These are some of the reasons that have led to a rise in cases of black fungus,” said Dr Laxman Jessani, consultant, infectious diseases, Apollo Hospital, Navi Mumbai.

Mucormycosis, also known as black fungus, is an invasive fungal infection that spreads rapidly through blood vessels, wreaking havoc in your body. It is acquired through the inhalation of fungal spores. Mucormycosis predominantly affects the sinuses, nose, eyes, jaws and the brain. The mortality rate associated with the infection is 90 per cent, said Dr Jessani.

The symptoms of mucormycosis vary, depending on which part of the body is affected. “A patient whose sinuses and nose are affected may have symptoms like black nasal mucus, pain in the sinus areas and breathing difficulty,’’ said Dr Jessani. The other common symptoms associated with the infection include fever, swollen skin over nose and sinuses, headache, cough and chest pain.

People with weakened immune system are at an increased risk for mucormycosis. Those with uncontrolled diabetes are vulnerable, too.

Those on chemotherapy or cancer medication are also at high risk for mucormycosis.

Among people with diabetes, mucormycosis is one of the worst infections that can occur and can often be life-threatening. If left uncontrolled, mucormycosis can lead to blindness and affect the brain. “If that happens, it is invariably fatal,’’ said Dr V. Mohan, chairman and chief of diabetology at Dr Mohan’s Diabetes Specialities Centre, Chennai.

“If steroids are used too early in the treatment of Covid- 19, it can lead to a flare up of the infection. Steroids should only be used in the latter half. There is evidence of cytokine storm, and hence steroids should be used judiciously,’’ he said.

Mucormycosis does not respect any boundaries and can spread from sinuses to eye, brain or even maxilla resulting in loss of teeth of the upper jaw in a matter of two to four days, said Gupta.

The treatment of mucormycosis is challenging as it involves extensive surgery, including removal of the jaw. Anti-fungal drugs like amphotericin-B are found to be effective in the treatment of mucormycosis. “However, amphotericin-B is a highly toxic drug. While it is quite effective in treating the infection, it invariably leads to kidney damage and renal failure,’’ said Mohan. “I have been lucky to treat a few patients with very good control of diabetes as well as judicious use of amphotericin-B, and some have survived and managed to get rid of the mucormycosis. However, it may be noted that if diabetic patients are treated with big doses of steroids, it increases the risk of developing mucormycosis. Hence, it is important to keep one’s sugar levels under control.”

*Some names were changed.