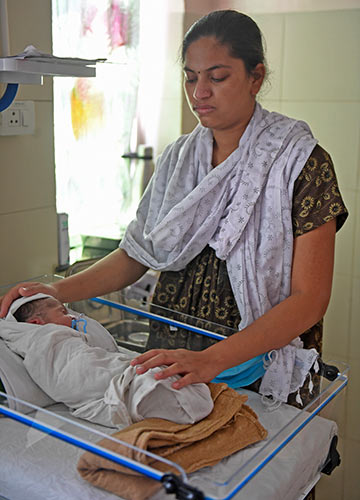 Back to life: Prathiba Paithane with her one-month-old son who underwent congenital heart defect surgery at Wadia Hospital in Mumbai | Amey Mansabdar

In a photograph clicked by her maternal uncle, Naina Singh, dressed in a white and blue striped sweater suit, looks straight into the camera. Her eyes sparkle and a smile plays on her lips. Nothing seems amiss. But on closer look, a slight bluish tinge is visible under both her eyes; her lips are purplish, almost black. And, the skin under her fingernails is light blue.

Naina is just 16 months old. At her age, most babies weigh close to 10kg; she is not even 7kg. Naina has four congenital abnormalities in the heart, including a hole, a misplaced artery and multiple blockages. Owing to these, the blood flow to her lungs is reduced and oxygen-poor blood flows out of her heart to the rest of the body, making her skin turn blue. “She is in very bad shape,” says paediatric cardiologist Dr Vikas Kohli, founder trustee of Child Heart Foundation, who diagnosed Naina’s ailment. “She does not have time—a viral infection will be the end of the child.”

Surgery will save Naina’s life, but it costs Rs3.5 lakh and her Noida-based family cannot afford it. Naina’s father is a farmer and her mother a homemaker. Her uncle, a taxi driver, has collected Rs1.25 lakh in the past one year. It will take him another two years to arrange the rest.

“Congenital heart defects (CHDs) such as a hole in the heart or narrowing of one of the main vessels need immediate surgical intervention, within hours to days of birth. If delayed, it can affect a child’s lungs and hearts irreversibly,” says Dr S. Ramakrishnan, professor of cardiology, All India Institute of Medical Sciences, Delhi. “If such conditions are treated at the right time, children are cured for life.”

CHDs could be a hole in the heart, a single blood vessel instead of two, an abnormal blood flow owing to improperly formed valves and more. “CHD is responsible for 28 per cent of all congenital birth defects,” says Dr Anita Saxena, professor and head of cardiology at AIIMS. According to her 2018 report titled ‘Congenital Heart Disease in India’, birth prevalence of CHDs is around 8-12/1,000 live births. “Considering a rate of 9/1,000, about 13.5 lakh babies are born with CHD each year globally,” she writes. “The estimated number of children born with CHD every year in India approximates 2.4 lakh, posing a tremendous challenge for the families, society and health care system.”

CHD is also one of the leading causes of death among children in their early growth phase, says Dr Biswa Panda, chief paediatric cardiac surgeon at Mumbai’s Bai Jerbai Wadia Hospital for Children. He recounts the case of a six-month-old baby with multiple heart abnormalities who, along with her parents, had travelled by train from Uttar Pradesh last year. Soon after her admission, she had a cardiac arrest. A specialist and his team managed to revive her and conducted the echocardiogram. The report pointed at the tetralogy of Fallot—a combination of four congenital heart defects including a hole, a deformity of the pulmonary valve, a misplaced artery and a thickened right ventricular wall. A surgery could have saved her, but in less than an hour she succumbed to a second cardiac arrest. “If this child had access to a competent centre closer to home and if she had been diagnosed even a fortnight earlier, she could have survived,” says Panda. “It was a totally preventable death just like so many before it.” 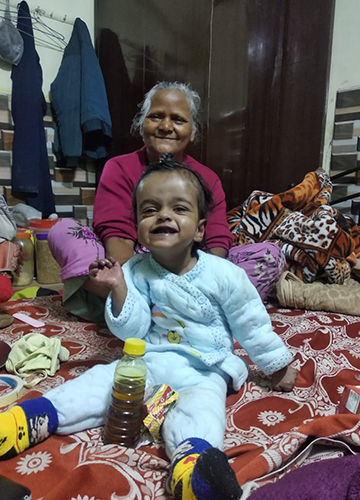 Hope floats: A surgery will save 16-month-old Naina, but her family has not yet been able to raise the money needed for the procedure.

With technological advancement and improved diagnosis, there has been a sharp rise in the number of CHD cases coming to the fore. On an average in Wadia hospital, Panda conducts two to three surgeries daily, as 80 per cent of the children with CHDs require surgery. “Considering the birth prevalence of serious CHD (requiring intervention in the first year of life) as 1.6/1,000 live births, about 43,000 babies are born in India every year with serious CHD, of which only about one-fourth seem to be receiving optimal cardiac care,” says Saxena.

Many cardiac care centres, adds Saxena, are located in regions with lower burden of CHD. There are 60 to 70 cardiac centres in India; of these, 10 are considered high volume centres, conducting more than 500 cardiac surgeries per year. “When considering critical CHD, the southern and western states have fared much better,” says Saxena. “States such as Uttar Pradesh, Bihar, Jharkhand and Madhya Pradesh, which presumably have much higher CHD burden as compared with the rest of states, have fared much worse.”

Uneven distribution of well-equipped hospitals apart, lack of awareness, delay in diagnosis, illiteracy, lack of funds and access to health insurance have kept children with CHDs from getting proper and timely treatment. In Palghar district near Mumbai, three-and-a-half-year-old Sandesh Patil was admitted to a hospital for pneumonia when he was diagnosed with a hole in the heart; he was just nine months old then. Since then, he has been waiting for surgery. “I am fed up with doing the rounds of hospitals,” says his father Santosh, a farmhand. “Nobody is ready to do the surgery because I have no money. I am pleading with them to consider me for the government scheme, but they are asking me to produce a salary slip. Where do I get that from?”

The scheme that Patil refers to is the Centre’s Rashtriya Bal Swasthya Karyakram (RBSK), launched in 2013. It includes early detection and intervention for children with medical conditions including congenital defects, and helps them receive surgeries at tertiary level for free under the National Health Mission. Yet, on the ground, families continue to struggle. Take, for instance, the case of Maharashtra. In 2019, the state decided to discontinue RBSK as it saw the programme as a duplication of the Centre’s new scheme that envisaged setting up of health and wellness centres across the country. At the time, Keshav Madhola was trying to generate funds to treat his two-and-a-half-year-old daughter Amruta’s congenital blocked artery. “My daughter was already diagnosed late, and to add to that there was no way I could apply to the government for funds,” he says. Madhola’s daughter died a year later.

The Paithanes, too, are in a bind over how to pay for their son’s surgery that cost Rs3.5 lakh. We met Prathiba Paithane with her one-month-old son at the Wadia hospital’s ICU a few days after the surgery. They could only pay Rs90,000. The family had been told that the baby would be shifted to the general ward if they did not pay the rest. The Paithanes were worried that their child would contract Covid-19 in the general ward. Atul, the baby’s father, showed us documents that qualify them for assistance under the Mahatma Jyotirao Phule Jan Arogya Yojana (MJPJAY). However, the hospital, although a charitable institution, would not consider it.

Dhanashree Dichulkar, cardiac surgical coordinator, says that the hospital has applied for de-empanelment from MJPJAY. “The problem is that if the surgery cost is, say, Rs2.5 lakh, we receive only Rs40,000 from the government,” she says. “So, it is not practical.” She adds that the hospital has quotas under which it performs surgeries for free, but they are limited to three to four patients per month. “The Paithanes knew for three months that they had to arrange at least Rs2 lakh,” she says.

The tragedy is that despite technological and medical advancements, CHDs continue to be one of the leading causes of mortality and morbidity in children in India “for reasons and factors that are completely under our control,” says Dr Manvinder Singh Sachdev, senior consultant paediatric cardiologist and interventionist at Medanta, The Medicity hospital, Gurugram. The pandemic and the ensuing lockdown further added to the distress of many, after non-Covid treatments and surgeries were put on the back burner. Travel restrictions only added to their woes.

Dr Krishna Kumar, clinical professor and head of paediatric cardiology, Amrita Institute of Medical Sciences, says that the facility to operate on neonates is extremely limited in India. Infant and newborn open-heart surgeries are the most resource-intensive endeavours in medicine, which require a concerted effort of numerous specialists. There is a huge discrepancy between the numbers we need to treat and the numbers we are treating. For instance, there is only one paediatric cardiologist for Uttar Pradesh and Bihar; he sits in Aligarh. And, paediatric cardiac surgery is not a lucrative specialisation. “There is no money in paediatric cardiac care, and it is very labour intensive,” says Ramakrishnan. “I know of a very skilled senior paediatric cardiac surgeon who is jobless. So, if such senior guys are finding it difficult, why would junior doctors take up the specialty?”

Also, it requires high-end infrastructure, which is only available in big hospitals. All these hospitals are mostly in loss and are recovering their money from adult cardiac surgeries, including bypass. In a hospital such as Wadia in Mumbai, which has patients coming from across India and abroad, there is only one chief surgeon, assisted by two others.

There is no national policy for CHDs in India, says Saxena. “This, despite the fact that 1 in 100 babies born are likely to have CHD,” she says. Prabhakaran Dorairaj of Public Health Foundation of India agrees that there should be a universal health coverage policy to fund such surgeries. “I believe that Ayushman Bharat is a beginning in that direction,” he says. “Forty per cent is covered now, hopefully it will be fully covered.”