We must learn to respect water 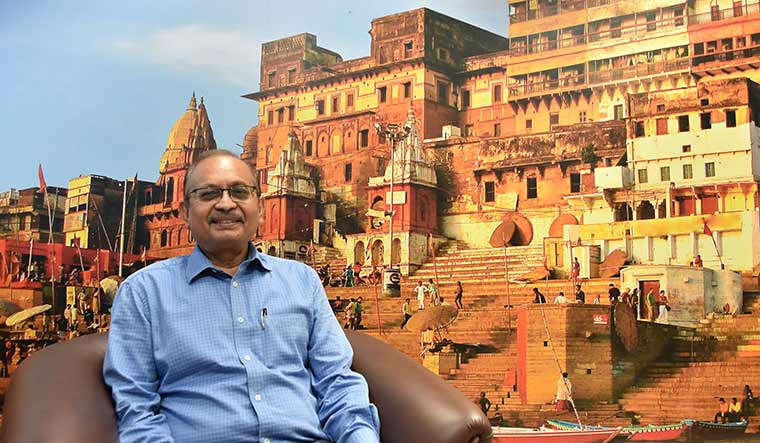 WHEN PRIME MINISTER Narendra Modi took over the reins of the country in 2014, one of his first big plans was to clean the Ganga, for which he even created a new ministry. This was not the first attempt to clean the river, which, though the lifeline of the northern plains, is also victim to the prosperity it creates. The river, which encourages new cities to grow along its banks, also suffers the endless discharge of sewage and industrial effluents. Modi's Namami Gange vision, however, was not just to clean the river, but also rejuvenate it. Thus was formed the National Mission for Clean Ganga. In the seven years since the initial announcement, what seemed like a humongous challenge once is slowly yielding results. Excerpts from an exclusive interview with Rajiv Ranjan Mishra, director general, NMCG:

It has been seven years since the announcement of the mission. When will the Ganga get clean?

We have affected the health of the Ganga since 1850, when we first began extracting huge volumes of water for irrigation. Ever since, we have only worsened its health with pollution. The damage of 150 years will take time to correct. People expect quick results, they all want to see the Ganga clean tomorrow.

Previous attempts at cleaning the river have not yielded much result. How do you expect this one to?

There have been attempts since 1985, and they were not futile. They yielded some result. The problem was that interventions were piecemeal and not continuous....

With Namami Gange, we took a year to understand the scale of the task and understand where past attempts failed. We also allocated massive funding for the mission. From 1985 to 2014, only Rs4,000 crore has been spent on Ganga cleaning, which is around Rs150 crore a year. Here, we have allocated Rs2,000 crore every year for the next 10 years. Instead of just looking at pollution hotspots, we assessed all 97 towns and 4,500 villages on its banks, the present sewage generation and even extrapolated the scenario 15 years from now with increasing population. Only then did we begin setting up sewage treatment plants (STPs) and renovating old ones.

What are the largest pollutants of the river?

Sewage accounts for 70 per cent of the pollution. If we tackle this, a major portion of our task is done. Industrial effluents may be less in volume, but their toxicity is more worrisome. There is also farm run-off of pesticides and fertilisers. The visible pollution—floating plastic, broken idols and other garbage—is more an eyesore, and that needs to be tackled for people to get involved in the river's rejuvenation.

What new interventions have been introduced?

We realised that many STPs were defunct because there was no maintenance, so if a component failed, the plant shut down. We therefore incorporated a 15-year maintenance and operation cost into the cost of the project itself. From 2016, we started the hybrid annuity, introducing public-private partnership for the first time in wastewater management. We give 40 per cent of capital cost during construction period, the private partner recovers 60 per cent over the 15-year annuity. This ensures that he will be keen to speed up the work, because his investments are at stake.

From a construction-based payment, we moved to performance-based payment. In Haridwar, the Jagjeetpur and Sarai STPs were completed well within time, something that does not happen in government projects. Now NITI Aayog recommends others to follow the hybrid model, too. In Hyderabad recently, a 300 million litres per day (mld) capacity STP has been commissioned on the hybrid mode. We also started the one city, one operator concept to ensure that all projects in a city are in sync with each other, and not working in silos.

How are you dealing with industrial effluents?

Kanpur, with its tanneries, is one of the biggest industrial effluent centres. We are setting up a common effluent treatment plant. We also have tie-ups with other countries for cleaner technology, like in paper mills, that will use less water, and [emit] fewer pollutants. Monitoring discharge is rapidly shifting to electronic surveillance, with flow metres checking the quality at inlet and outlets. This is in addition to physical checking, which we do through third-party evaluation, roping in IITs, for instance, to ensure that there is no local nexus to fudge data.

If you were to assess success using any one parameter, how would you rate your progress?

Let us look at just the sewage discharge. In Uttarakhand and Jharkhand, almost all the STP projects are done. Uttar Pradesh looked almost impossible, but nearly 60 per cent projects are done, the rest will be completed in two years. In Prayagraj, we have already moved to the trans-Yamuna region, as the core city work is done. Bihar had almost no treatment facility, so we began from scratch. Patna had only a 60mld treatment facility; we have commissioned plants to cater to 600mld…. West Bengal had got many plants under the Ganga Action Plan; we need to renovate and retrofit [them].

Nirmal Ganga, aviral Ganga (clean and flowing Ganga) was the initial chant. Tell us something about the aviral aspect

Namami Gange is not just a cleaning project, it is also about the river's rejuvenation. We began our task with a report from the seven IITs on river basin management, and created projects accordingly. A flowing river dilutes pollutants; water keeps the river alive. So, we must ensure there is a fixed amount of water in the river, or an ecological flow, at all times in the year. We take out so much water from the river—in Haridwar alone, 85 per cent of the water is extracted for the Upper Ganga Canal. We have given instruction to all units that extract water, including hydro projects, and we monitor this closely. Only one hydro project, Alaknanda Power, went to court and got a stay; we hope the matter gets resolved soon.

There are wetland conservation projects all along the length of the river, as these feed the river during the dry months. With GIS, we have mapped floodplains and urban wetlands, and as an authority, we can now stop construction and other activities in these regions. In Uttarakhand, we have a spring rejuvenation project to revive the Himalayan springs feeding the river.

We have a comprehensive forestry plan for catchment area plantation. It is so good that the environment ministry is replicating this for 13 other rivers. We are also promoting organic farming along the river's length, to reduce the discharge of fertilisers and pesticides.

What would you call the mission's success stories so far?

Kanpur and Varanasi looked like impossible tasks, but we are almost there with treating all water that gets discharged from these cities. That gives us hope; it gives people hope.

In Mathura, we created a market for treated water, and supply Indian Oil 20mld treated water from the Yamuna. In Varanasi, the Dinapur STP generates power from the wastewater and is now running on self-generated power. In Patna, we linked all 16 ghats and have got a beautiful promenade that people can enjoy.

Aquatic life is a good indicator of the river's health. There have been so many sightings of dolphins and turtles and other such animals in recent times. Even [Uttar Pradesh Chief Minister] Yogi Adityanath recently said he saw dolphins in Varanasi.

There was supposed to be a study to understand the river's self-cleaning mechanism, which keeps the water from going bad. Please update.

NEERI [National Environment Engineering Research Institute], Nagpur, is doing the study. Its interim reports have already spoken about the viruses or bacteriophages that eat bacteria. All rivers have such bacteriophages. The Ganga is unique because it has more of them. That is why Gangajal can be kept for months or years. NEERI is doing a large study on the entire microbiology of the river now.

Do you think a change in power could affect the mission?

No. We have designed it in such a way that it will continue despite any change in government. We have contracted projects for the next 15 years. One of our achievements is establishing a robust institutional structure. We are not just a mission or a special purpose vehicle; we are an authority. This gives us more power. Also, the Ganga has an emotional connect with every Indian. Which government will shy away from continuing the work?

What is the next big challenge?

It is to ensure that the flow is maintained in the river. For this, we need to change age-old practices of agriculture. We must learn to catch the rain, improve water bodies and respect water.