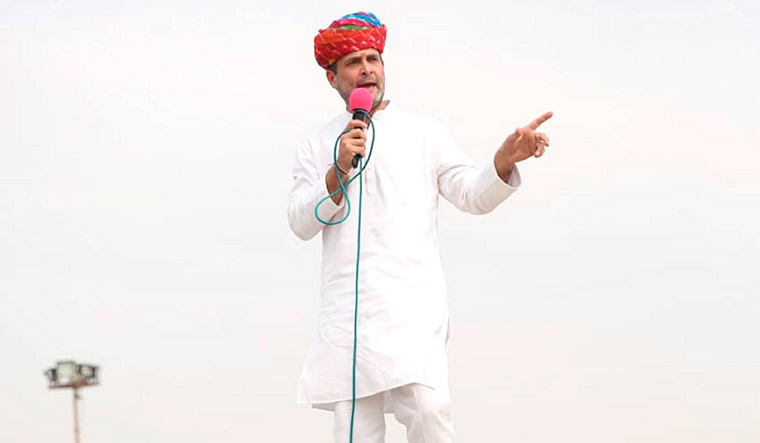 The budget session of Parliament saw the Congress contingent in the Lok Sabha demand a separate discussion on the farm laws; their protests resulted in a washout of four consecutive days of business. Former Congress president Rahul Gandhi led the party’s agitation; he dubbed the Narendra Modi regime a government of ‘Hum Do, Hamare Do’ (We two; ours two), which passed the farm laws to benefit crony capitalists. In the Rajya Sabha, though, the party was more subdued, agreeing to raise the farmers’ issue as part of the motion of thanks to the president’s address.

This highlighted the divide in the party. Leaders known to be close to Gandhi, such as the party’s leader in the house Adhir Ranjan Chowdhury, deputy leader Gaurav Gogoi, chief whip Kodikunnil Suresh, and whips Manickam Tagore and Ravneet Singh Bittu, took the lead in the lower house. In the upper house, leader of opposition Ghulam Nabi Azad and his deputy Anand Sharma—who were among the senior leaders who wrote a letter of dissent to the Congress leadership last year—held forth with more nuance.

While the leadership question still remains—Gandhi had resigned as Congress president and his mother Sonia has been interim chief since—the proceedings in Parliament showed that Gandhi was the de facto leader of the party, setting the agenda for it inside and outside Parliament. During the past several months, leaders who were in sync with him have been appointed to key positions. This was also evident in the states going to the polls—Jitendra Singh, a long-time confidant of Rahul, was given charge of Assam; old warhorse Tariq Anwar was given Kerala; Jitin Prasada was given West Bengal, and Dinesh Gundu Rao, Tamil Nadu and Puducherry.

When Gandhi had gone to Italy on a personal trip in late December, some party members wondered if it meant that he was unwilling to take charge of the party. However, soon after returning to India, Gandhi headed to election-bound Tamil Nadu in mid-January.

It was thought that the leadership issue would be resolved before the assembly elections, and there was buzz that Gandhi could take on the role again. He had visited Tamil Nadu and had taken on Modi at the national level.

However, the expectations were misplaced as the Congress Working Committee postponed the election of the new party president till after the elections. Gandhi headed back to Tamil Nadu for a full-fledged round of campaigning, conducting roadshows over three days in late January.

The results of the elections are expected to have a bearing on the leadership issue. And this would explain the urgency with which Gandhi headed south to campaign. Tamil Nadu and Kerala present the best chance for the party to be on the winning side.

Dressed in T-shirt and jeans, an unconventional choice for electioneering, Gandhi held a hectic tour of the western districts in Tamil Nadu. A video of him cooking mushroom biryani with a group of rural YouTubers went viral. Rao said the success of the campaign could be gauged by not just the response Gandhi got from the people, but the unifying impact it had on the Congress’s state unit. The party had seen some infighting, and a mammoth state executive had been set up in early January to accommodate everybody.

Internal strife aside, the Congress wants to send a message to the mercurial Dravida Munnetra Kazhagam that it will have to be taken seriously during seat-sharing discussions. In the previous assembly elections, the Congress had won a mere eight of the 41 seats it had contested, while the DMK had won 88 of 180 seats. Congress leaders, however, pointed out that the party had won eight of the nine seats it contested in the 2019 Lok Sabha elections. The Congress has made a list of 75 constituencies where it sees a chance of winning. It has also noted the seats which the DMK would have lost if it had not been in an alliance with the Congress.

Rao, however, insisted that his party would not be unnecessarily demanding during seat-sharing talks, as long as it was treated fairly.

Last month, the DMK chief in Puducherry had announced that his party would contest in all the seats there, suggesting a fallout in the alliance there. It also indicated that seat-sharing talks in Tamil Nadu would be anything but pleasant. Gandhi’s decision to campaign without his allies in Tamil Nadu has to be seen in this context. The party would, however, hope that Gandhi’s excellent rapport with DMK president M.K. Stalin would help smooth over tensions.

“It is not Rahul ji’s style to get into the minute details of election management,” said Tagore. “He leaves it to the general secretary in charge and the state leadership. His broader policy, however, is that the progressive alliance will protect the Tamil culture, pride and faith. His main role is to lead the party in the campaign. The connection he has established with the people, especially in southern India, is extremely important.”

In addition to troubles with the DMK, the Congress in Puducherry is also riven with desertions that the BJP allegedly orchestrated. While two legislators had quit in January, two more left the party on February 15 and 16, reducing the V. Narayanasamy government to a minority just a day ahead of Gandhi’s scheduled visit to the Union territory. It is hoped that his visit would boost workers’ morale and provide an impetus to the ongoing talks with the DMK.

In neighbouring Kerala, there is a lot more at stake for Gandhi. His Lok Sabha election win from Wayanad was a face saver when he lost family stronghold Amethi. That the Congress-led United Democratic Front won 19 of 20 seats in the state was attributed to Gandhi choosing to contest from there. However, the party slipped in the recent local body elections, and a lot now rests on Gandhi. 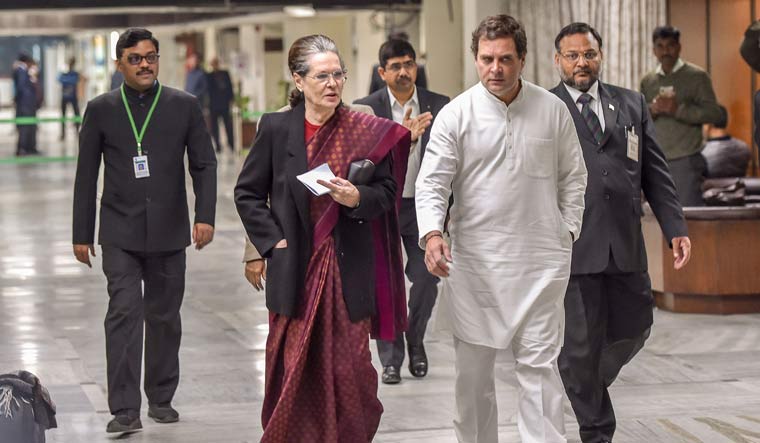 Trusted party manager and Rajasthan Chief Minister Ashok Gehlot was brought in to supervise election management in Kerala. Gandhi’s office is said to be constantly monitoring the poll scenario; his trusted aide K. Raju, who is in-charge of Wayanad, is likely to play a key role.

Party leaders believe that frequent visits by Gandhi would help keep in check the intense infighting in the state unit. He has laid down certain ground rules: MPs should not contest the assembly polls, winnability should be the main factor in deciding candidates, people who have lost multiple times should not be given tickets, youth and women should be given tickets, and the manifesto should be a people’s document.

The Congress also hopes that it would gain from the goodwill Gandhi is said to enjoy among the minorities. This is crucial as there is a feeling that the Christian community, which has been a staunch supporter of the party, is drifting away. “Rahul Gandhi is not a Kerala leader,” said Ernakulam MP Hibi Eden. “He is an elected leader from Kerala. He is our national leader. And, of course, he will be campaigning across Kerala. It was because of his popularity that we had won 19 of 20 seats in the last parliamentary elections.”

Now, from the south to the northeast. Congress’s Assam in-charge, Jitendra Singh, has the unenviable task of wresting the former stronghold from the BJP. Following the death of former chief minister Tarun Gogoi, the party seems to lack a face in the state. While the BJP is said to have deepened its organisation in the state, the Congress is dealing with intense factionalism. A number of leaders have been up in arms against state Congress president Ripun Bora, who apparently has the backing of Singh and Gandhi. While the party hopes to gain from the unrest regarding the National Register of Citizens and the Citizenship Amendment Act, the opposition space is crowded.

Optimistic that the party-led alliance—which includes Badruddin Ajmal’s All India United Democratic Front, the left parties and the Anchalik Gana Morcha—will unseat the BJP, Singh said, “This election is not about who is going to be chief minister and who is coming to power. It is the people’s election.”

Chhattisgarh Chief Minister Bhupesh Baghel, a staunch Gandhi supporter, has been appointed senior observer for Assam. And it was after he got involved that the party finally bit the bullet and joined hands with the AIUDF. A section of the party had argued that this alliance would alienate indigenous voters. Baghel has also insisted that the party form its manifesto only after an intense survey among the people of the state.

In neighbouring West Bengal, Prasada, who was identified with team Rahul Gandhi during the United Progressive Alliance rule, but has since had a troubled relation with the Gandhis, is the party’s in-charge. However, the face of the party is the aggressive Adhir Ranjan Chowdhury, who has staunchly supported the Gandhi family in the aftermath of the dissent letter episode.

Prasada sounded cautious while talking about the party’s prospects in the state, where the no-holds-barred contest between the ruling Trinamool Congress and the BJP has dominated proceedings. “These two parties are ahead in terms of eyeballs,” said Prasada. “But that does not mean that the Congress will not present a challenge.”

The effort of the Congress and the left alliance, said Chowdhury, would be to ensure that the elections do not end up as a two-way fight between the Trinamool and the BJP. He made the candid admission that the alliance was not really in the picture till a few months ago, but insisted that it was now a viable option for the people. “The election in West Bengal is no longer binary,” he said. “It has become a triangular fight. In each and every meeting held by the Congress and left parties, the common people are thronging to hear us. There may be some confusion in the minds of the people whether we will be able to meet their expectations. But we are certainly on the ascendency.”

The Congress has made efforts to ensure that workers of the allied parties function in tandem. “We had an alliance in the 2016 assembly elections, but it was half-baked and tentative,” said Chowdhury. “Both of us have now realised that if we do not get our act together, we are facing political extinction in the state.”

The leadership conundrum notwithstanding, Gandhi is the lead campaigner for his party in the state elections, even as he steps up his engagements at the national level. Moreover, state units of the party, starting with Delhi, have begun passing resolutions asking him to take over the reins.

“Rahul ji’s leadership is extremely important to the party at this juncture, when the country is going through a difficult phase,” said Delhi Congress president Anil Chaudhary. “The party needs his leadership to tackle the communal and authoritarian forces that are ruling the country.”

Much of that could hinge on the results of the elections.