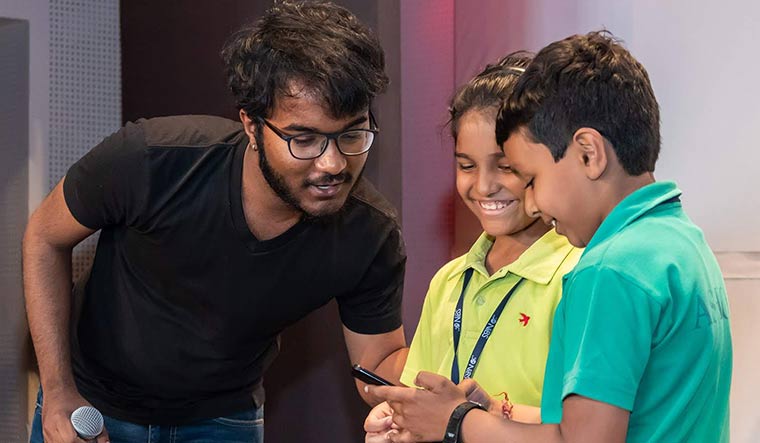 CAN MATTERS OF the heart be detached from the workings of the mind?

Love makes you lose your mind, they say. But maths wizard Neelakantha Bhanu Prakash proved it wrong on December 22, 2020—National Mathematics Day, or birthday of mathematical genius Srinivasa Ramanujan. During a livestream on his YouTube channel with stand-up comedians Abijit Ganguly, Naveen Richard, Praveen Kumar and mentalist Suhani Shah, Bhanu was asked about his love life. With a straight face, the 21-year-old replied that it was great while it lasted. Only, he was simultaneously calculating the sum total of ten random two-digit numbers flashing on the screen, in a matter of milliseconds.

After Bhanu’s correct answer (to the maths query, that is), an astonished Abijit said, “The fact that it was clearly a painful topic, bro… that was really amazing.” Bhanu is an ardent believer in the magic of maths, and according to him it is more than just problem-solving. “It can also help you control your emotions,” he tells THE WEEK over the phone.

A graduate in mathematics from St Stephen’s College in Delhi, Bhanu is not your average number nerd. His livestream was high on entertainment, with maths exercises and tricks taking centre-stage. Towards the end of the nearly two-hour-long session, he also broke his own world record of multiplying a random number 40 times in 15 seconds; this time he did it 42 times.

In July 2019, the Hyderabad boy landed at Marine Drive in Mumbai. Armed with a camera and mic, he asked youngsters to throw numerical challenges at him. He lived up to his ‘fastest human calculator’ tag and how. He also surprised them by telling them the day they were born based on their date of birth. Through TED Talks, online events and stage and street shows, Bhanu wants to turn maths into something cool, and mathematicians into performers and artistes. “It is like any sport or art form,” he says.

Dubbed as a successor to the maths wizard Shakuntala Devi, Bhanu holds multiple records. Last August, he became the first Indian to win a gold medal in the Mental Calculation World Championship at the Mind Sports Olympiad held in London. That achievement put him in a unique situation where he had to excuse himself from a live BBC interview to take a call from President Ram Nath Kovind.

Bhanu’s tryst with maths started at a tender age. When he was just five, he met with an accident that left him with a head injury and a disfigured face. He underwent a surgery and had 70 stitches on his face. As he prepared to return home from the hospital, all mirrors in the house were hidden to save him from the sight of himself. With doctors stressing on mental engagement as part of the recovery process, his parents—Srinivas Jonnalagadda and Hema Shiva Parvathi, who have a food manufacturing business—introduced Bhanu to puzzles. That opened up a new world for him. From puzzles, he moved on to abacus, where he learnt speed, before taking up arithmetic as a skill for competitions.

Currently, Bhanu trains for a couple of hours every day in developing his cognitive abilities and observation and listening skills. He says his brain is always computing, even while giving interviews. His technique for multitasking is simple: With great speed, shift attention from one track to the other and still be in the moment, holding a conversation or finding a solution to a problem.

But there is one problem that bugs him—“maths phobia”, prevalent across the country and among all ages. And, he has made it his mission to resolve that issue through his start-up, Exploring Infinities Pvt Ltd. “Arithmetic is the first thing to be taught in school and since there are a lot of calculations, students tend to hate it,” he says. “We learn a language starting with stories and then going for grammar. Maths should be taught the same way. A fun experience of learning maths will make a difference.”

His start-up offers two online courses—Math Wizard Experiential Learning for students aged six to 10 and Turn On The Computer In You for 11- to 17-year-olds. “I end up working 17 to 18 hours a day,” he says, while taking a break in between meetings and classes. “There are about 39 sessions for students, which will include maths games, cognitive abilities [development] and advanced computation.” The start-up has around 500 paid students from India and other countries, including the US, Canada and Australia. Indian students are charged Rs12,999, and foreign students Rs32,800.

His free outreach programmes for underprivileged children are on a much bigger scale. Through tie-ups with state government agencies, he has helped 50,000 to 60,000 students with his programmes, he says. “I want to empower children to like maths,” he says. “To bring in more relativity, maths can be combined with economics, data and social sciences.”

Bhanu, who is looking forward to the first round of funding, credits his alma mater for the unique exposure it gave him. “St Stephen’s is a fantastic place,” he says. “While I majored in maths, I also understood social sciences, policy and cultures. I saw things beyond maths, and the management was definitely supportive.”

St Stephen’s principal John Varghese calls Bhanu a “treasure of India”. “He is a genius and an enterprising young man,” he says. “He became an entrepreneur at a young age. We could provide him a platform to complete his degree. Since he is very talented, we also promoted him. We have plans to associate with him in the future.”

For Bhanu, life has changed since last year. He admits that he is enjoying the fame. “After I won the competition, 40 million people were talking about me,” he says. “Mathematics is usually not a point of discussion and we are not looked up on as celebrities. But it is a nice feeling to be recognised as a mathematician. In the future, I want to be known as someone who made maths easy.”

The constant calculations in his head do get overwhelming at times. But it is difficult to turn his brain off, he said during the livestream, as he has trained it to work a certain way. And so, he tries to distract himself. How? By counting his footsteps. Obviously bizarre, he agrees.