Biomining has emerged as an effective method to reclaim open dumpsites 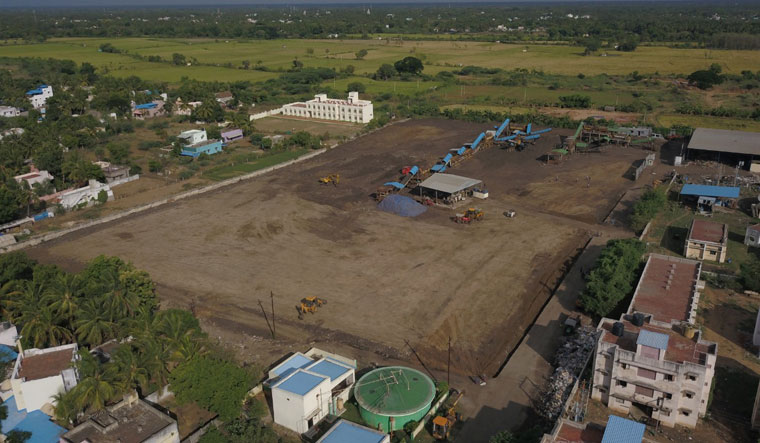 The 12-acre Karikulam dumping yard is 12ft deep in unsegregated waste, the total volume of which comes to 1.1 lakh cubic metres. The 40-year-old dumpsite is a blot on the temple town of Kumbakonam. To prevent further contamination of the groundwater, the Kumbakonam Municipality looked at multiple options for a permanent solution. The initial suggestion was to do bio-capping, which involves placing a cover over the waste.

However, the authorities soon identified three disadvantages: it would make the retrieval of the land impossible, it would not reduce the odour and the leachate would continue to pollute groundwater. This made them go for an innovative method called biomining in 2015. In just three years, the municipality successfully retrieved all 12 acres and became the first civic body in India to retrieve a legacy dumpsite.

Biomining is an economically feasible and environmental friendly technique to retrieve open dumpsites by excavating waste, segregating it and clearing the land. The process involves waste stabilisation (by spraying a bio-culture over the waste piles), waste screening, segregating using municipal solid waste plants, extracting different materials, and then recycling or reusing it. The waste may also be used to make refuse-derived fuel (RDF). To reclaim soil quality, soil enrichers are used. Biomining can eliminate foul odour from dump yards, reduce air pollution and vector-borne diseases, eliminate dump fires and leachate formation, and stop soil pollution and groundwater contamination. The reclaimed dumpsite could be used for other purposes. The Kumbakonam municipal authorities employed a private firm for carrying out the biomining operations, and within a year 75,000 cubic metres of garbage was cleared from Karikulam.

According to the Central Pollution Control Board, there are 3,159 dumpsites in the country spread over more than 10,000 hectares of urban land. Urban India accounts for a third of India’s population and generates 54.75 million tonnes of solid waste a year. Open dumping has been the most prevalent method of waste disposal in the country for the last five decades.

Many of these open dumps are in the middle of cities and are much higher than the permissible height limit of 20m. For instance, the open dump in Ghazipur is around 65m tall—just 8m shorter than the Taj Mahal. In 2017, a portion of this landfill collapsed and killed two people. In August 2020, a part of the Bhalswa landfill in north Delhi collapsed and injured three rag pickers.

Studies have shown that people living close to a dump yard face substantial health, economic, social and environmental issues. Health issues such as respiratory symptoms, irritation of the skin, nose and eyes, gastrointestinal problems, fatigue, headache, psychological disorders and allergies are frequent among them. Odour-producing chemicals from these sites can cause nausea, fatigue and headache. Also, open dump yards can depress property values in its neighbourhood.

The new Solid Waste Management Rules of 2016 directed urban local bodies (ULBs) to clear legacy waste dumps and operational dumpsites to ground-level through biomining. In 2018, the Indore Municipal Corporation emerged as the inspiration for all other ULBs by eliminating 15 lakh metric tonnes of legacy waste. What was accumulated over decades was cleared in just three years, at a cost of less than 010 crore. The reclaimed land is worth 0400 crore.

The Indore project had limped in its initial phase; the authorities could clear only two lakh metric tonnes in the first two years. In May 2018, Asheesh Singh, who took charge as the municipal commissioner of Indore, set a target of six months to fully reclaim the 100-acre dumping yard. He deployed more machinery and resources and stopped outsourcing the work to an outside agency. The additional machinery taken on rent was operated in two shifts. Employing more in-house resources solved the problem of fund shortage. And, by December 2018, the corporation did away with 13 lakh metric tonnes of waste. The recyclable polythene recovered from the site was sent to cement plants and for road construction; the construction and demolition waste was sent to recovery facilities to make construction materials; recyclables were sent to respective recycling facilities; the leftover of about 15 per cent waste was sent to secured yards. The recovered soil was used to refill the ground.

The National Green Tribunal asked the Delhi ULBs to implement the Indore model in its three large landfills—Ghazipur, Okhla and Bhalswa. The model has motivated Ahmedabad, too, to implement biomining.

According to a 2019 status report submitted by the Central Pollution Control Board (CPCB) to the National Green Tribunal, 11 Indian states have so far initiated biomining in their landfills. During September-October 2019, the CPCB conducted inspections of dumpsites in Delhi, Gujarat, Haryana, Karnataka and Tamil Nadu, and observed many shortcomings in the biomining procedures. These include non-compliance in waste stabilisation, waste screening and leachate treatment. Also, many corporations are executing the work on a piece-meal basis and have no comprehensive time-bound action plan for finishing the projects. The CPCB also observed that fresh waste is being dumped at Bhalswa and Ghazipur.

Waste management is a crucial part of urban infrastructure to ensure safety to human health and environmental sustainability. And, it is the need of the hour that ULBs adopt a phased approach to switch from open dumpsites to sustainable landfills using biomining.