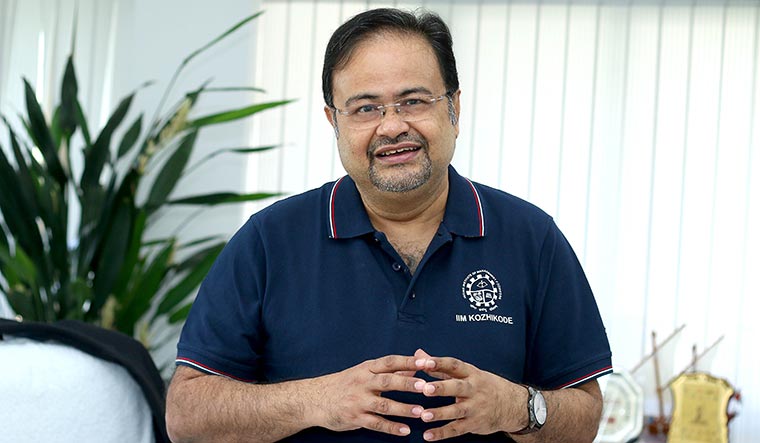 The Indian Institute of Management Kozhikode is celebrating its 25th year. And, despite the challenges posed by the pandemic, it has been a good year. IIMK was placed 90th in the QS World University Rankings in the thought leadership category. It was rated in the A band in the ministry of human resource development's Atal Rankings of Institutions on Innovation Achievements (the first IIM to be featured). It was also declared the best inclusive incubator in Kerala at the Women Start-up Summit 2020. IIMK's director, Professor Debashis Chatterjee, spoke to THE WEEK about the institute’s vision and the innovations pioneered by it. Edited excerpts:

What are some of the most significant innovations pioneered by IIMK?

IIM Kozhikode has irreversibly transformed the higher education space in India. [In 2001,] it became the first b-school in Asia to pioneer interactive learning programmes for working executives through satellite delivery systems. It is a diversity leader, bringing 54 per cent women to the flagship MBA programme in 2013 and 2020, 30 per cent women among faculty and 40 per cent women on the board of governors. IIMK is home to the first ever Indian business museum and incubated a centre of excellence for employment of the marginalised and underprivileged, now known as the CREST Foundation. It was also the first IIM to anticipate the multidisciplinary approach of the NEP (National Education Policy) 2020 and commence a two-year, full-time MBA in Liberal Studies and Management (PGP-LSM).

Could you explain the vision behind PGP-LSM?

It was observed that the current workplace is largely focused on technical (hard) skills. There was a need for those more equipped with emotional and creative intelligence. The scientific method of teaching and learning was not sufficient for preparing future managers. There was a dire need for an alternative form of management education. PGP-LSM was an initiative of IIMK to equip the future manager with the earnestness to deal with fellow human beings effectively. This untapped arena is crucial to many roles in sectors like marketing, media, human resource management, social enterprise, hospitality and health care. These are roles that require a holistic perspective and diversity of thought which PGP-LSM is specifically aiming to develop.

What are your plans for expansion and growth?

The premise of our growth plans is that both the future and past are integral to the path taken by an institution of excellence. Having a wide, far-seeing vision is not an indulgence but an activity that is necessary to give an institution a sense of purpose, direction and imagination. That is why we have chosen to think in terms of what IIMK will be able to contribute to India and the world some two-and-a-half decades from now.

What will India, management education and the world look like in 2047, the year IIMK turns 50 and India turns 100? There is no guarantee that the certainties of today will hold then. We will need new ways of thinking, new skills and a bold, positive imagination. IIMK has set for itself a pre-eminent role in ‘Globalizing Indian Thought’ (the institute's dictum). The potential impact that India can have on 21st century businesses make us believe that this is a legitimate aspiration. It is our earnest hope that our experiences and our Vision 2047 will be of inspirational value to managers and institutions who wish to contribute to the future of India and the world. We wish to play our part in the creation of a new and resurgent India.

Why the focus on Indian thought?

When we talk about India's soft power, we talk about yoga and Indian cinema. Management is India's most successful soft power. Most people do not realise that. We have sent out our managers who are now heading companies like IBM and Google. What makes it possible for our managers to do so well? It is the deep orientation to values in India; wealth creation is sacred and legitimate here. A way to express Indian soft power is to provide a management education that is rooted deeply in not just the symbolism, but the actuality of what it means to be an Indian. We want to maximise India's clout and reclaim thought leadership.

What is stopping our b-schools from being perceived as the world's best?

There is definitely huge potential among India’s higher education institutions to be visible and accountable internationally. And, they have been making steady inroads into the global ranking framework. However, in order to truly achieve their global potential, IIMs should be allowed a greater degree of freedom in attracting foreign students. This will override the current systemic problems and lead us to a path of global recognition.

How would you respond to the suggestion that the IIM Act gives IIMs an "unfair" advantage over private b-schools?

IIMs as institutions of national importance have a significant role to play in higher education. The primary mandate of IIMs’ quest for autonomy, which has been granted by the Act, is academic freedom and power to direct its resources in a way that supports and sustains our vision for India’s future. The Act has empowered IIMs to make quality interventions and also [be] vehicles of social change by implementing government mandated reservations, which other top b-schools usually shy away from. The fear that the value of their diplomas will suffer is unfounded. If anything, this is an opportunity for other institutions to innovate and contribute to society in terms of creating a healthy, diverse and gender-positive ecosystem. Some private b-schools have been granted graded autonomy, so it is a level playing field now.