Fire in the belly

Farmers have settled into a rhythm of resistance with food, songs and fiery speeches 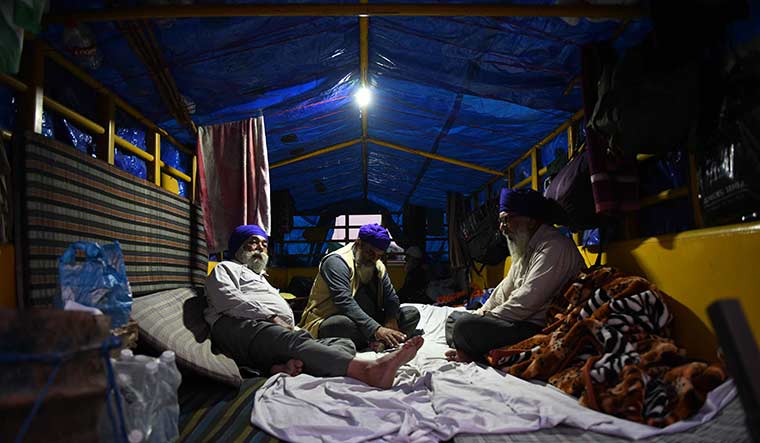 Night fight: many protesters are living out of their tractors at the singhu border | Sanjay Ahlawat

Tanupreet Singh, an advocate from Jalandhar, is standing with his eyebrows furrowed just outside one of the many barricades at the Delhi-Haryana border in Singhu where farmers from across Punjab and Haryana have gathered to protest the Centre’s new farm laws. Clad in a white coat, he is holding a placard, to express solidarity with the agitating farmers, along with a group of medical volunteers and doctors who have arrived with ambulances full of medicines and testing machines. Arguments are heating up with the police force deployed at this particular barricade. “Yesterday also we had such trouble getting in. I do not understand. We are here with medical supplies. We are here for sewa,” says Tanupreet, lines creasing his face with indignation. Another volunteer overhears snatches of conversation in the ensuing ruckus and his face suddenly breaks into a grin. “We are so tired of being labelled ‘Khalistanis’ by the godi media that some of us have just given up and said ‘Yes, we are Khalistanis, now come and take us on’,” he says.

A day at the Singhu border, swept over by waves upon waves of protesters from India’s farming community, is to experience a heady mix of hurt, pride and hearty defiance. Beyond the barricades, running back kilometres into the dusty horizon is a patchwork of tractors, trolleys, vats bubbling with cooked food, rousing speeches, and clarion calls of “bole so nihal” and “har maidan fateh”. “We are not going anywhere until these evil bills are repealed,” says Bhinder Singh, a farmer, from southern Punjab. “We will keep our dera [camp] here. We have all the ration and milk we need. The whole world is contributing.” He has been living out of his tractor for the last two days. “We have big roti-making machines here; no one is even making it with hands,” says Bhinder. “Sometimes there is gajar ki sabzi and sometimes there is matar ki sabzi. In fact, there is so much food coming in, we are asking people to donate it elsewhere.”

Metres away from Bhinder, a traditional Khalsa drink, Shaheedi Degh, is being prepared. Kilos of almonds, black pepper, sugar, rose petals and cardamoms are being ground in a mortar by sewadars; the conventional recipe of the health drink often has cannabis, too. “We will stay here, eat here, die here. That is what the government should be worried about,” says one of the sewadars as he heartily crushes and grinds dry fruits with a big, fat pestle.

A little further away, two young boys from Hoshiarpur, Punjab, are bathing in the afternoon sun by drawing water out of a 6,000-litre tank. “Everybody here takes a bath like this under the open skies. Even if the bills are withdrawn, we will stay here for seven more days. Fateh kar ke hi jayenge [We will not go before conquering],” says Balwinder Singh, another boy from Jalandhar, in complete sync with his new environment at the capital’s gates. 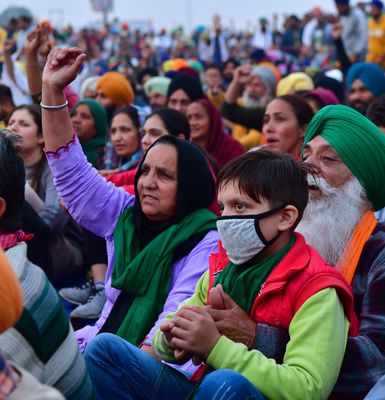 Diversity ensured: Women and students form an important part of the protests at the singhu border | Rahul R. Pattom

At the heart of this united front seething with rage is the belief that farmers know what is best for their survival and they quite understand the larger implications of the new farm laws. Posters on tractors repeat the same thought. How exactly are farmers benefiting from the entry of private players, is one constant refrain. “What was the pressing need to pass three controversial farm bills in 2020, the worst year of the century? Who are they trying to please? Adani-Ambani? All the farmers in India are against it,” rails 65-year-old K.P. Singh, chief spokesperson of Amritsar-based Akhand Kirtani Jatha. His organisation now holds daily Gurbani kirtans at the protest site to sustain their brethren’s charhdi kala or the spirit of buoyancy and optimism. As he speaks, a huddle begins to form with older members of the organisation enthusiastically chipping in. “Modi and Co. are needlessly selling us things we do not want. They have no farming background or knowledge. It is like going to a shopkeeper, asking for a specific brand and being sold something cheaper and unbranded. Like I am not hungry and you still want to force-feed me,” says a 75-year-old protestor, Gurudayal Singh. “Our kids are fighting wars in the borders and we, their parents, are fighting a war here. We are not leaving without conquering Delhi.”

His friend, K.P. Singh, who has already recovered from Covid-19 in Punjab, rubbishes fears of Covid-19. “I got Corona when I did not even step out of my house,” he says. “Everyone will get it. It is not a factor here. There is always a virus scare when it suits them.” Soon, a female member of the group from Delhi chimes in to roaring applause: “This is a poor man’s country. Every class lives here. You think this is bloody America that you can bring in all this privatisation in agriculture. Farmers are the backbone of this country. Who fed the jobless and the homeless during the lockdown? We will support all the farmers every day and keep up their spirits. Because if that flags, this country will perish. That is real patriotism.”

To add greater depth and diversity to the movement, women and students have been lending their support in increasing numbers. ASHA workers can be seen criss-crossing the site with medicines and day-to-day essentials for female protestors, including sanitary pads. “If women want to stay somewhere indoor for the night, we arrange it for them,” says Sunita, an ASHA worker. “They need to bathe, wash clothes or rest, for all that a colleague has lent us his home. We also have an office space here where we keep our stuff, where women can charge their phones and sleep.” Sangeeta, who is part of the Bhagat Singh Chhatra Ekta Manch, an organisation based in Delhi University, says that washroom and sanitation facilities are some of the major issues for women at the protest site. She is pursuing a certificate course in Punjabi from Delhi University and is stationed at Singhu with her union members. “We also have to put up with the feudal mindset here. There are taunts about our presence. But we are here because we do not want this movement to become all about male hierarchy,” says Sunita, who points to a series of colourful posters painted by her friend Monica that encapsulates the demands and concerns of farmers in pithy Hindi, English and Punjabi lines. From “Water cannons, tear gas, lathis can break our bones, but not our spirit” to “Fruits, grains, vegetables can cross the Delhi border, but not the farmers to fight for their rights”, Monica says she is using art to reclaim the voices of the farming community.

Ranjit Singh, an MPhil researcher from Punjabi University in Patiala, has been camping at Singhu to distribute books, pamphlets and explainers at the protest site, along with mobilising the youth to lend their voices. He waits under a tent, sipping chai on a mattress, as he listens to a speech by a student activist from his college commanding a gathering of hundreds of farmers. “Our university students are all well-read and are well apprised of the issues, they knew beforehand what was coming,” says Ranjit. “When the bills were passed, they went to villages to warn the farmers on how the bill will affect them, concerns on minimum support price and storage. People are spreading inane allegations of Khalistan operators; we are here to dispel these myths.”

As Hardeep Singh, a thin lanky college student prepares gobi ki sabzi as part of langar while singing a folk tune, ‘lehran ban uttho...’, to himself, he says with a knowing smile, “If need be we will have to offer kurbani [act of sacrifice] here, but there is no budging from our demands.”