Dam and the doomed 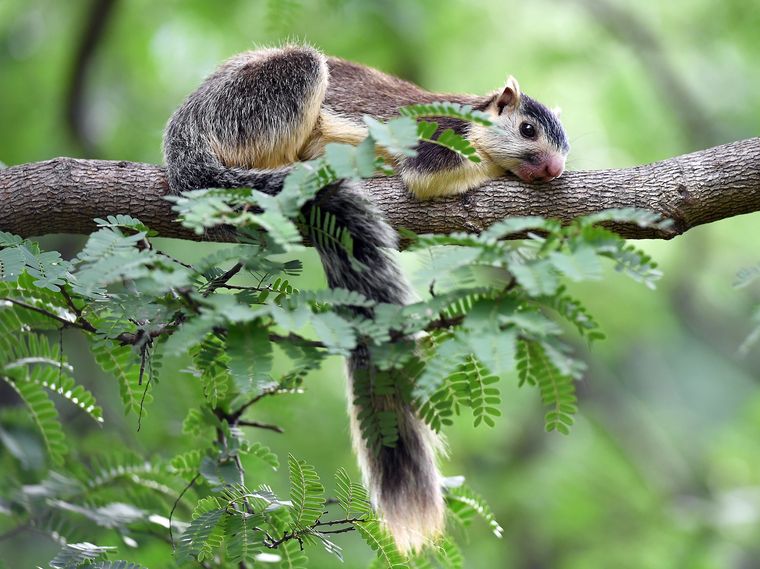 The bare buttress roots of the Arjuna trees resemble the hard-earned muscles of a bodybuilder. They hold a firm grasp on the eyots in the river that gives Karnataka’s Cauvery Wildlife Sanctuary its name. On the sinuous riverbank, branches of taller black plum, fig and tamarind trees interlace with those of the Arjuna trees, creating an uninterrupted arboreal bridge that runs for many kilometres. This is the wildest terrain along the Cauvery’s 800km route. But these trees now face the threat of deluge.

Rocks and a hard place: Rock formations at Mekedatu, where Karnataka is planning to build a gravitational dam.

Two to tango: A pair of Grizzled Giant Squirrels on a treetop in the Cauvery Wildlife Sanctuary.

Master of the jungle: The interlacing branches of trees create an arboreal bridge that runs for many kilometres in the sanctuary. (Above) a Grizzled Giant Squirrel negotiating a break in the bridge.

At Mekedatu, which is located inside the sanctuary and borders Tamil Nadu, a controversial dam project has been proposed by Karnataka. It will provide drinking water to Bengaluru city, situated 100km from the sanctuary. Once the dam is built, 2,925.5 hectares of the sanctuary will get inundated, submerging nearly one lakh wild trees, some of which have stood here for centuries. It is not just the trees but the entire ecosystem of the forest that could be submerged in the proposed reservoir. Representing the victims of the deluge among the flora and fauna is a seemingly small rodent that belongs to the genus of giants—the Grizzled Giant Squirrel, named so for its salt-and-pepper fur. 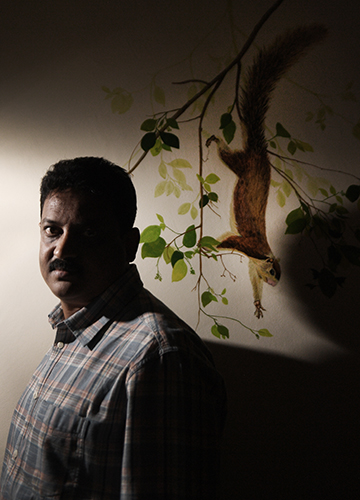 Batting for nature: Sanjay Gubbi, a conservation biologist who has worked extensively in the cauvery wildlife sanctuary, says the plight of grizzled giant squirrels represents a threat to the sanctuary’s entire ecosystem.

Shy and elusive, these squirrels nest in the trees and use the branches to forage for leaves, fruits, seeds and barks, depending on the season. Tender tamarind seeds, Ixora leaves and the barks of the Krishna Siris are their favourites. Grizzled Giant Squirrels have the appetite of a careless youth, but when it comes to building nests, they behave like a responsible adult. And, when not eating or building a home, they spend hours relaxing on a branch, like a retiree.

Endemic to south India and Sri Lanka, Grizzled Giant Squirrels face a population decline owing to the dwindling habitat everywhere. The near-threatened Grizzled Giant Squirrel is one of the three varieties of giant squirrels found in India; the other two being the Indian Giant Squirrel and Black Giant Squirrel. Less than 500 Grizzled Giant Squirrels are left in India. Of these, less than 50 call the Cauvery Wildlife Sanctuary their home. If they exit from here, the richness of Karnataka’s wildlife will diminish. Along with the squirrels, the population of endangered orange-finned Mahseer fish, smooth-coated otters, mugger crocodiles and rare honey badgers will also decline. Also, the dam will lead to more human-animal conflicts, what with the forest area shrinking. Elephants and deers could enter towns and adjacent villages and raid crops.

While people of Bengaluru have been vocal against cutting trees for widening roads, not a word has been spoken yet against the proposed dam project. For now, Tamil Nadu is the only active protester against the construction of the dam. It claims that water inflow into its territory will be restricted. Environmental activists are being cautious in their protests as it is a matter of state chauvinism. 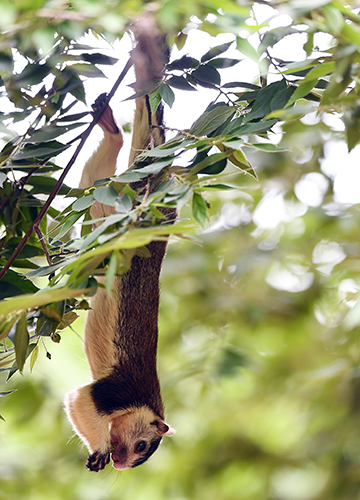 A squirrel hanging from a branch while gorging on food.

“The project is to tap the surplus water in a good rainfall season that otherwise ends up in the sea,” says Captain S. Raja Rao, former secretary of the state’s environmental and minor irrigation department. “Any developmental project will naturally create environmental damages. If there are threats to certain species, then alternative ecosystem should be created to protect them.”

But conservation biologist Sanjay Gubbi differs: “Bengaluru’s water requirement is an endless well. It is wise to use in-house solutions such as revival of lakes, rather than creating mammoth projects, which will disrupt the ecosystems that play a crucial role in reducing global warming. The plight of the Grizzled Giant Squirrels represents the survival threat posed to the entire wildlife and their habitats here.”

The Mekedatu dam site is located 3km downstream of Sangama, the confluence of the Cauvery and one of its tributaries, Arkavathi. The River Vrishabhavathi originates in Bengaluru, and later joins Arkavathi as a tributary. The polluted Vrishabhavathi pumps 500 million litres of sewage water daily into the Arkavathi, which will end up in the dam in future. That water from the dam will be pumped back as drinking water to Bengaluru. Already, the faecal coliform bacteria level in the Arkavathi had doubled in a month—from 7,000 in most probable number (MPN) per 100ml last November to 14,000MPN/100ml in December, according to a report by the state pollution control board.

While Noah’s ark provided refuge to all animals, big and small, during The Great Flood in the Bible, would a modern-day Noah come to the rescue of the Grizzled Giant Squirrels? For now, the roots of the trees that nestle the squirrels seem to be digging in deeper, providing a resistance of sorts. But if the dam project becomes a reality, only a giant leap towards adaptability can save the Grizzled Giant Squirrels.