Sri Dharmarajika Chetiya Vihara: One of the greatest symbols of Buddhist renaissance 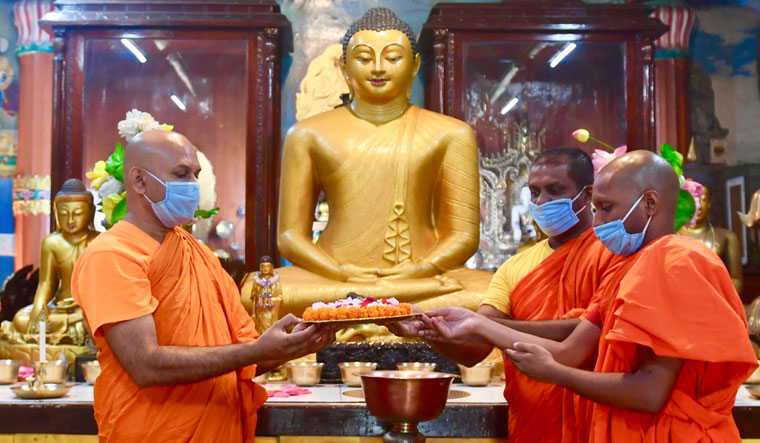 Faith to: the fore Prayer in progress at the Maha Bodhi Society, Kolkata | Salil Bera

In 1891, Sinhala Buddhist monk Angarika Dharmapala had made a trip to India. He was shocked to see the deplorable condition of Buddhism’s holy shrines in the country where it was born. In the next three decades, he put in his blood, sweat and tears to revive Buddhism in India and to restore ancient Buddhist shrines at holy sites like Bodh Gaya and Sarnath. He also founded the Maha Bodhi Society to propagate the ideas of peace, perfection and human values.

Even after Dharmapala’s death, the society continued its mission of spreading the teachings of the Buddha through selfless service. Today, under the stewardship of general secretary Venerable P. Seewalee Thero, who has been in office since 2016, the Maha Bodhi Society of India is out to revive the lost teachings of Buddhism. “The society strives to unearth the hidden treasures of Buddhism, to propagate and promote humanism and human values with the message of love, compassion, wisdom and peace,” says Thero.

Headquartered in Kolkata, the Maha Bodhi Society of India currently has no foreign centres, except one in Lumbini, Nepal. The society was originally founded in Colombo, Sri Lanka, in 1891, but relocated to Kolkata (then Calcutta). The society’s famous shrine, Sri Dharmarajika Chetiya Vihara, and the headquarters complex in Kolkata are celebrating their 100th foundation day on November 26. Commemorative programmes of the Vihara, that would last a year, will commence with one-week special ceremonial dhamma activities on November 26. There is, however, no extravagant celebration because of the pandemic. But prayers from around the world are pouring in for this century-old beacon of Buddhism.

A Hawaiian philanthropist, Mary Robinson Foster, who donated Rs65,000, was one of the biggest patrons of the temple project. Contributions like hers helped Dharmapala set up the temple and office building in the heart of The City of Joy. “He chose Calcutta because back then this city used to be the intellectual and cultural capital of India,” says Ranadhish Chowdhury, administrative secretary of the Maha Bodhi Society.

Dharmapala got the society registered in 1915 with Sir Asutosh Mookerjee, then chief justice of the Calcutta High Court and former vice-chancellor of Calcutta University, as its first Indian president. Mookerjee was one of the most revered patrons of the society. Asutosh’s son and Bharatiya Jana Sangh founder, Syama Prasad Mookerjee, was the longest-serving president of the society—from 1942 to his death in 1953. Currently, Justice (retd) Chittatosh Mookerjee, who hails from the same family, is a patron of the society.

British journalist Sir Edwin Arnold was the first one to highlight the pathetic state of the Bodh Gaya temple in 1885. Dharmapala read the article and was deeply moved by it. On January 22, 1891, he visited Bodh Gaya for the first time and found that the Buddhist shrine was under the control of a Hindu monk. “He then took up the mission for the restoration of holy sites of Buddhism, and the revival of Buddhism in India and other parts of the world,” says Chowdhury. “He was attacked while doing this in India, especially in Bodh Gaya. [But] he was able to persuade the British government to take all possible measures to preserve the sacred sites.”

Subsequently, the British government agreed to give the Maha Bodhi Society a relic of the Buddha—discovered during an excavation at Bhattiprolu Stupa in Madras presidency—provided the society built a suitable vihara in Kolkata. Thus, the foundation stone for Sri Dharmarajika Chetiya Vihara was laid in 1918 and completed in 1920. On November 26, 1920, the then Bengal governor, Lord Ronaldshay, ceremoniously handed over the holy relic to Asutosh Mookerjee, who in turn handed it over to Dharmapala in the presence of theosophist Annie Besant.

The vihara was designed with the Ajanta Caves in mind, and it has a sacred relic casket enshrined in a black stone pagoda. It was decorated with frescos illustrating the life of the Buddha and Buddhist communities from around the world. On Buddha Purnima, the sacred relic is displayed for veneration. Mahatma Gandhi, Mother Teresa, Rabindranath Tagore, the Dalai Lama, former Vietnam president Ho Chi Minh, former Chinese premier Zhou Enlai and former Sri Lankan president J.R. Jayewardene are some of the eminent personalities who have visited the temple. Spiritual figures from British India had played a great role in Dharmapala’s spiritual journey. He was born in a Sri Lankan Christian family in 1864. He declared himself a Buddhist in 1880 after coming in close contact with the founders of the theosophical society, Colonel Henry Steel Olcott and Helena Blavatsky (who shifted her activities to India in the late 1870s).

In 1893, he met Swami Vivekananda at the Parliament of the World’s Religions. They became close acquaintances. Like Vivekananda, he, too, was widely travelled. He worked for the London Buddhist Mission (1889-1892).

Dharmapala worked hard to restore the Mulagandha Kuti Vihara at Sarnath. He completed the work he started, but fell sick during his stay there. On April 29, 1933, at the age of 68, Dharmapala died.

The Maha Bodhi Society has around 2,000 members now. Many international chapters of the society became inactive after Dharmapala’s death. The present leadership of the society is trying to revive them. The society is also considering publishing the ancient manuscripts on the holy Tripitakas (Buddhist scriptures).