A peek into the life of Y. Mangayamma and her twins

children from the neighbourhood take care of the twins

The land of cotton. Nelaparthipadu—nela means land, and patti means cotton in Telugu (patti became parthi over the years). Sounds dreamy enough, but the road to this Andhra village is anything but that. It takes top-notch driving skills and a great deal of patience to navigate the six dusty, narrow kilometres that link this village in East Godavari district to the nearest blacktop.

At the entrance of the village is a statue of a wavy-haired white man in a suit, astride a horse. “He is Cotton Dora,” said a villager. Even 120 years after his death, Sir Arthur Thomas Cotton, a British engineer, is revered in the region for spearheading irrigation projects that have continued to benefit farmers. Hence, the Telugu honorific dora. But the land itself is not under cotton anymore; paddy reigns now.

On the day THE WEEK visited Nelaparthipadu, its bylanes were lined with blue, white and pink marquees. The 1,000-strong village was gearing up for a wedding. Small joys during the pandemic. In the last few weeks, the village saw five deaths. While four died of Covid-19, the fifth one “probably died of fear of the disease despite testing negative”.

The fifth one, 80-year-old Yerramatti Raja Rao, died on September 9. He was in a way responsible for making the village world famous. On September 5, 2019, he and his wife, Mangayamma, 74, became parents to twin girls through in vitro fertilisation (IVF). His relatives said that it was perhaps his love for his daughters that cost the doting father his life. “He used to take medication for a heart ailment. One day, he complained of chest pain and uneasiness,” said Kota Thrimurthulu, who has leased Rao’s farmland. “He was reluctant to consult a doctor. We somehow convinced him to go to the hospital.” While the doctor asked him to get admitted, Rao refused, said Thrimurthulu. “He feared he would contract the virus,” he said. “He was also concerned that his daughters would catch the virus from him. He went back home and stayed indoors.” Villagers said that he soon died of a heart attack.

Rao’s close friend Subba Rao said that the other four deaths in the village had added to Rao’s anxiety. “A former sarpanch and his wife had died of Covid-related complications,” Subba said. “He was worried that he would meet the same fate, leaving his children orphaned.”

But Mangayamma, whose sharp reflexes belie her age, has accepted Rao’s death as destiny. On the advice of religious leaders, she has moved out of their small house in a lane opposite the village temple, following Rao’s death. She will stay at a relative’s place for the next six months—with her nonagenarian mother, Tulasiamma, and the twins, Rama Tulasi and Uma Tulasi. 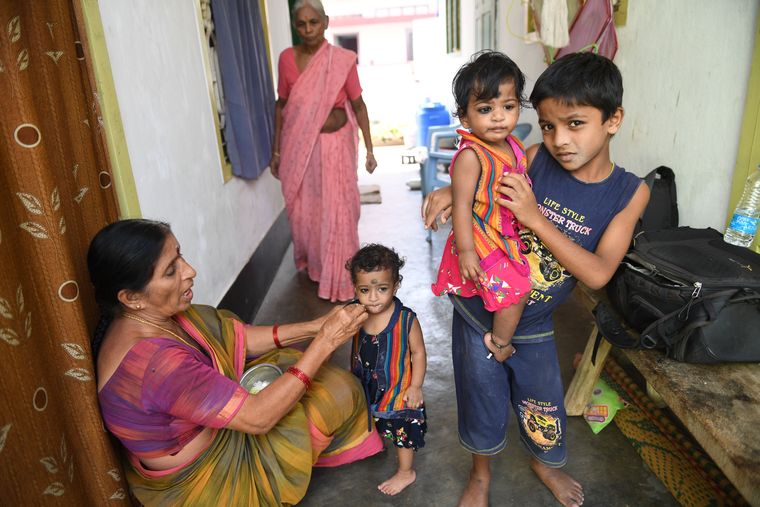 Women from the neighbourhood take care of the twins.

Rama is older to Uma by an hour. Mangayamma is especially fond of Rama as she thinks that she resembles Rao. “He was very fair like her,” she said. Rama is the neighbourhood favourite as she mimics speaking on the phone or singing a bhajan. She has a contagious smile and seems to be at ease with people. “I want to make her a doctor,” said Mangayamma. “She is very intelligent and also has a sharp tongue. She is bold and does not hide her feelings.”

Uma, on the other hand, is shy and has an intense look. Instead of playing with toys, she likes spending time outdoors. “She is more like me. She is calm and reserved. I want her to be an engineer,” said Mangayamma. Family members said Uma was Rao’s favourite, and that he spent his last hours in her company. 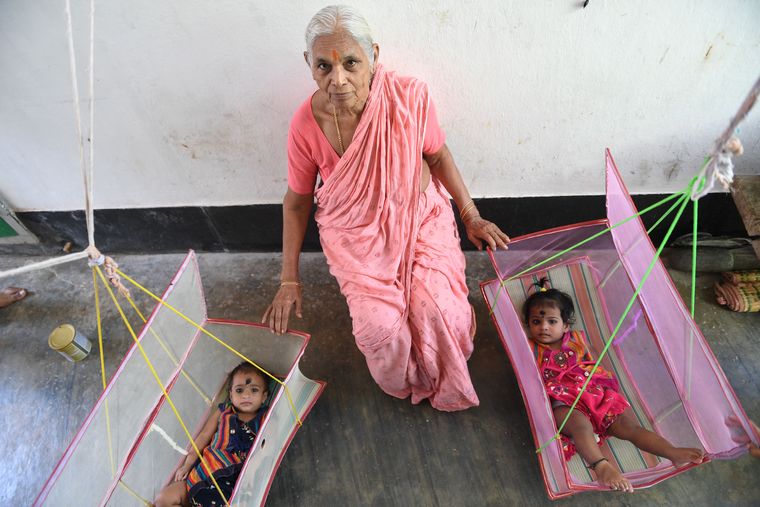 Inspiring mother: young women from mangayamma’s village, who aspire to have children through ivf, approach her for blessings now.

The villagers, no doubt, are fascinated by the twins and their antics. According to them, the twins started walking unassisted before they turned one. They also started speaking quite early. “I was so happy when I heard one of the girls call me ‘Amma,’” said Mangayamma. “I cannot express that feeling. I did not expect her to say that word at such a young age.” According to her, villagers and extended family members are surprised by the fact that the babies do not cry or even fall sick often. The Rao twins are truly seen as a miracle by villagers.

Rao lived just long enough to see his children turn one; he died four days after a low-key birthday celebration. Now, neighbours, relatives and villagers are helping the two widows with the task of raising the twins. “We are doing fine. We have no problems,” said Tulasiamma, sternly. She is wary ever since the family and Dr Uma Shankar received bad press soon after the twins were born. Several health experts had raised questions over the ethics of putting the elderly couple through IVF.

While Tulasiamma is reluctant to share details, Mangayamma has no such qualms. Her day, she said, begin at 4am. While she goes about finishing her daily chores, Tulasiamma takes care of the twins. They take turns to be with the girls until a maid comes to give them an oil bath in the morning. As Mangayamma is not lactating, the babies are fed infant formula; they are being introduced to rice for lunch. During the day, it is the responsibility of the neighbourhood children to play with and look after the babies. The babies are fed formula at night, too, and it is lights off at 8pm. 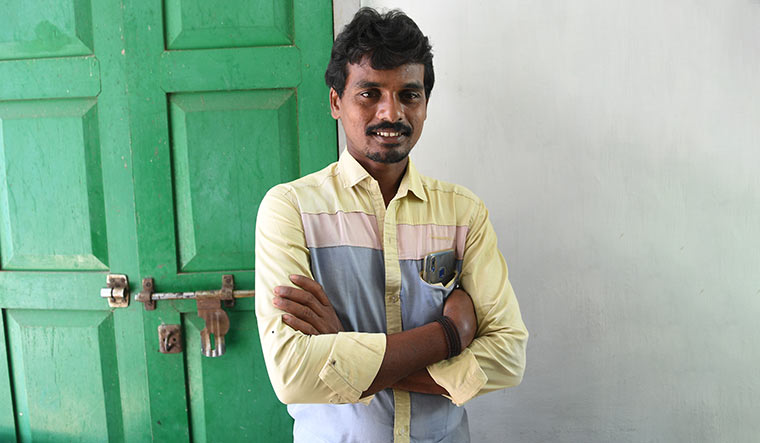 “Rao was of great help. He not only used to look after his daughters, but also would take care of all the household needs,” said Subba. “The milk powder (formula) is available only in the nearby town and he used to get it. After he left us, I have been running errands for the family.”

When the two women were asked if they were in a position to look after the twins on their own, a neighbour chipped in, “Do not go by their age. They neither have blood pressure nor diabetes. They will live long enough to see the girls grow up into fine young women.”

Mangayamma, who is from Nelaparthipadu, married Rao when she was just 14. After the wedding, Rao shifted base from his ancestral village, and ever since their lives have revolved around temples and doctors. “We liked going on pilgrimages. I have visited Kasi, Rameswaram, Kanyakumari and other places. We also attended a lot of religious events,” said Mangayamma. It is learnt that the highly religious couple generously donated idols and money to local temples. 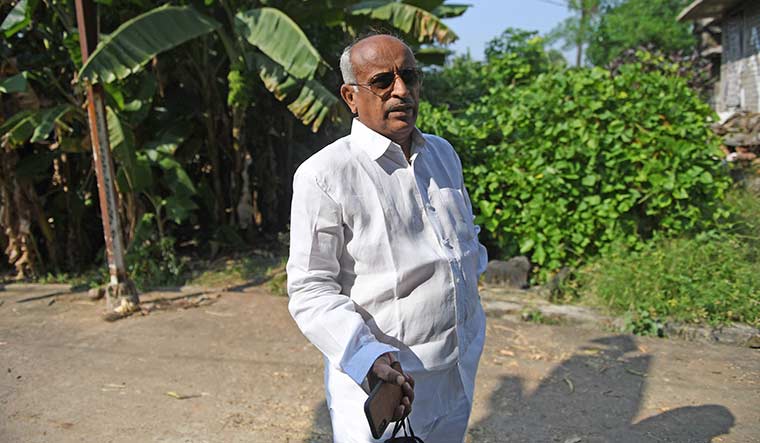 Their wish to have a child also took them places. “We tried many doctors and medicines,” said Mangayamma. “For this, I travelled to Chennai, Hyderabad and other cities. When Rajiv Gandhi was assassinated, I was in Chennai consulting a top doctor. We tried ayurveda and other traditional medicines, too. I even met a foreign doctor who was on a visit to a local health centre operated by missionaries. All these consultations proved to be a disappointment.”

The pressure to have children came not only from their family but also from society. “You know how it is in villages, right? It is a norm to invite only women with children to rituals or functions. That way, they felt left out,” said Veera Venkata Suryanarayana Chowdary, a village elder and Rao’s friend. “I told him on many occasions to adopt a child. But he was not okay with the idea.”

After five decades of running around, Mangayamma and Rao met Dr S. Uma Shankar of Ahalya Nursing Home in Guntur, 230km away from the village. “I told him that I wanted to become a mother and he smiled at me,” said Mangayamma. “He was reluctant to treat me at first, but I insisted. He said that he can treat me only if my womb is healthy and my body is strong enough to support my pregnancy.” Fortunately for the Raos, the results were encouraging. So they leased out their land and shifted to Guntur for the duration of the treatment and pregnancy.

The couple stayed at the hospital for almost 12 months. “We were lucky that in the first cycle itself, there was a positive result,” said Mangayamma, who chuckled while recollecting her experiences with other patients. “Most of them were around 30 to 35 years old and they used to be scared of injections. They would come to me and ask how I was so fearless during the treatment. Some of them even wished that they were like me. Even the doctor complimented me for my conduct during the treatment.”

Being pregnant at 73 did not seem daunting, said Mangayamma, neither did she have any health scares during pregnancy. “Since I was under strict supervision owing to my age, the doctor ensured that various specialists checked on me,” she said. “When the heart doctor came to see me, I laughed and assured him that I was fine. Then there was another doctor who came to check on my mental health, I told him the same.”

All the couple wanted was one child, and they were blessed with twins. As the twins were underweight, the hospital kept them under observation for nearly three months. The Raos stayed on the hospital campus during this time. And then came the negative media reports. Around the same time, Rao fell ill, which upset the family further.

After the twins gained weight, they were discharged; but the family was asked to stay close to the hospital. So the Raos lived in a rented house in Guntur for three more months. During this period, the couple and the twins underwent regular check-ups. “Dr Uma Shankar treated me like an elder sister,” said Mangayamma. “His mother treated me like a daughter.” Added Thrimurthulu, “Even now, I have to send pictures of the girls regularly to the doctor as he keeps track of their well-being.”

The villagers have high regards for the doctor. “Some of us from the village went to Guntur to attend the cradle ceremony,” said Subba. “The doctor was there and he was very caring. He even gave gifts to the two girls as if he was related to them.”

Today, young women in the village who aspire to have children through IVF approach Mangayamma for blessings. And, she happily obliges. But one wonders how she will raise her two daughters on her own. The villagers brush off the concern. “If any untoward incident happens, we are there to take care of the girls,” said Subba. “The village elders will also ensure that all the family property is transferred to the girls and there is no foul play by anyone. We will make sure they have a great life, for they are the pride of the village.”

It does take a village to raise twins.