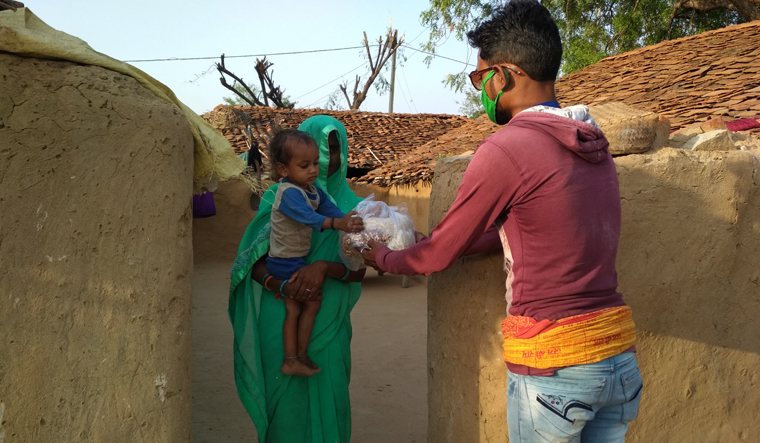 On the afternoon of April 23, Devendra Ujle, 26, stood forlorn in front of Prakashchandra Sethi Government Hospital in Indore. He had been frantically trying to find a vehicle to shift his pregnant wife, Asha, to MY Hospital. An anaemic Asha was close to her due date, and had been at the government hospital for two days. But as her condition worsened even after blood transfusions, she was referred to MY Hospital for delivery. Being a Covid-19 hotspot, Indore was totally shut down, and Devendra could not find any mode of transport. That is when Lalita Ujle (not related to the couple) arrived. Lalita, 31, is a driving instructor with Samaan Society, an NGO. She was on her way home when she spotted the couple. “Lalita didi not only took Asha and me to MY Hospital, but also persuaded the blood bank officials to give a bottle of blood to Asha,” says Devendra. “She was with us till 11pm when my daughter was born. But for Lalita didi, I don’t know what would have become of my wife and daughter.”

When the Ujles were discharged, Lalita drove them home, about 10km from the hospital. “As part of Samaan Society, we do relief work in the city and therefore have curfew passes,” says Lalita. “So I simply helped when I saw them in trouble.”

Lalita is part of Samaan Society’s 'Sakha Cabs' for women. She and three other women drivers now deliver relief material to those in need. The organisation has been working in the most affected areas of Indore like Palda and Malwa Mills, providing ration kits to people who lost their livelihood during the lockdown. “We distributed grocery kits along with soaps to about 600 needy families,” says Rajendra Bandhu, executive director of Samaan Society.

The organisation essentially works for women empowerment, but has now busied itself with relief work. Several such organisations have reached out to those in need during the pandemic, going beyond their usual area of service. Apart from NGOs and people's networks, these civil society groups also include informal groups that were formed during the Covid-19 crisis.

Sachin Jain of Vikas Samvad, a Bhopal-based advocacy group, which is documenting such efforts across India, says that not everyone had access to big donors; they funded their relief work jointly or through contributions from friends. While there were attempts to weaken and vilify civil society groups by closing funding avenues and using laws against them, he adds that the work that is being done by these groups needs to be discussed.

Take, for instance, the work being done by Sangram Sanstha, which has distributed grocery kits to 689 sex workers in Maharashtra’s Sangli, Miraj, Karad, Satara, Ichalkaranji and Kolhapur districts. Meena Seshu of the Sanstha talks about a 27-year-old sex worker who immolated herself in March after she developed fever. “She did not test positive for Covid-19,”she says. “She was probably anxious, distressed about the loss of livelihood, of having to send her six-year-old child to her parents’place and her lover stopping his visits. We did counsel her, but she took the extreme step. Her case is typical of the situation that most of them are in.”

Like other daily wage earners, sex workers, too, were deeply affected by the lockdown. But organisations like Sangram Sanstha, that are part of the National Network of Sex Workers (NNSW), have managed to provide relief to more than 5,000 families in Andhra Pradesh, Telangana, Jharkhand, Gujarat, Maharashtra, Tamil Nadu, Kerala and Karnataka.Apart from providing groceries and other essentials, the NNSW has been creating awareness about the pandemic among the community. “Having suffered from HIV, sex workers are quick to understand the threat of viruses,” says Seshu. “They were told about the contact spread of Covid-19, asked to use face mask and sanitisers and keep buckets of water and soaps for clients, even before the pandemic threat peaked in the country.”

Cut to Kalyani in West Bengal, where students of Bidhan Chandra Agricultural University came together to help migrants. In the early days of the lockdown, they got distress calls from villages that they had visited for field work. “The villagers initially sought information about Covid-19,” says Julekha Perveen, a third-year student at the university. “Slowly, they started telling us about the situation faced by their kin who had migrated across the country for work. So, my friends, Tamonath Roy and Chandan Bhattacharya, and I decided to do something concrete.”

The trio collected 060,000 from friends, family and teachers and bought groceries for the needy. With help from other student volunteers—now around 60—they contacted migrants from West Bengal scattered across the country. Thus was born the informal Joint Forum Against Corona Crisis. 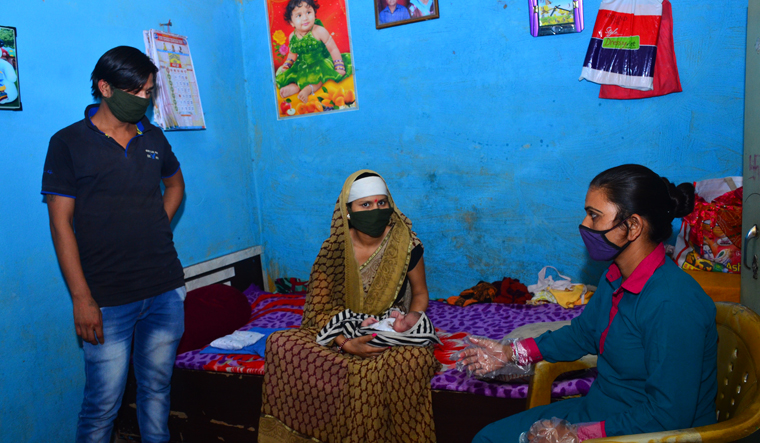 “We started connecting migrants with local organisations so that they could get food and other help. If we did not find anyone, we would transfer some money to them,”says Perveen. One such beneficiary is Sushanta Sarkar, a jewellery artisan from Burdwan, who is stranded in Jaipur. Sarkar says he and his five friends are surviving on the money provided by the forum as none of them have been paid their salaries. The forum also introduced migrants to apps of government schemes that could help them financially or return home. “It was not easy to explain it to them, so we made small videos using screenshots of these apps and sent them,” says Perveen.

Technology has been an effective tool to provide help during the pandemic. When incidents of violence against Covid-19 workers took a communal colour in Indore, members of Aim for the Awareness of Society (AAs) realised that people were anxious because of the pandemic and the unavailability of medical staff to treat other ailments. So, AAs compiled a list of a dozen doctors who were ready to provide free telemedicine services. Posters were put up with phone numbers and availability hours of the doctors. Volunteers also visited homes of patients to facilitate phone calls to doctors and delivered medicines.

“I was already helping people through phone counselling, but when AAs contacted me, I thought this could formalise my work,” says Dr Azhar Qureshi, who continues to work as an intensivist at a local hospital. “Now I get 20-25 phone calls every day and suitably guide them. People with anxiety as well as the kin of critical patients contact me. I also call them for followups.”

Also, AAs has created videos and text messages, inclusive of religious teachings, to encourage people to undergo tests, if needed, and not confront the administration in this regard, says Waseem Iqbal of AAs. Since it handles Child Line in Indore, AAs is keeping children in shelter homes engaged through online classes in dance, yoga, aerobics and Japanese language. “We also helped send children stranded in different educational institutes including madrassas, back home,”says Iqbal.

In Jammu & Kashmir, which was under lockdown long before the pandemic, Koshish has been using technology to create awareness and carry out relief work. Audio and video messages in local languages have been circulated on social media and are also being played at mosques. Likewise, local mosque committees were activated for Covid-19 relief work. “They already engage in relief work from time to time, but we activated them and connected them with each other to create a wide network,” says Dr Rauf Malik of Koshish.

In the tribal-dominated villages of Rewa, Satna, Umaria, Panna, Niwari and Shivpuri of Madhya Pradesh, people are pleasantly surprised when they receive grocery kits, including nutritious items like jaggery, sattu (powdered, roasted gram) and laai (rice product), at their doorstep. Bhopal-based Vikas Samvad Samiti and its associate organisations are undertaking relief work. They have already delivered grocery kits to more than 3,000 families. Also, the kitchen gardens set up by the organisation at community and home levels have helped villagers get fresh vegetables and fruits during lockdown.

A widow with two daughters, Pan Bai Gond of Kataria village in Umaria is grateful for the help from groups. She was forced to seek alms during the lockdown. “But one day, two persons came to our house with a bag of rice, wheat, pulses, oil, jaggery, spices and other things,” she says. “Now we have enough to eat for a month.”