Accustomed to close contact, life during lockdown unsettling for Indians

By Mandira Nayar Issue Date: May 03, 2020 Updated: April 23, 2020 18:20 IST
Sharing’s essential: A Mumbai resident passes a cup of sugar to her neighbour amid the lockdown | Amey Mansabdar

In Delhi, the beginning of summer is announced by a tiny purple fruit—the phalsa. Sweet and sour, the phalsa is as much part of the summer experience in the national capital as the hot Loo that blows across the plains.

“It is my favourite bit of summer,” says Pooja Sharma, exclaiming over the peacocks that visit her Vasant Kunj terrace each day. “I miss the phalsa wallah.” Her longing for what is missing—her connection to the world—has been distilled into just this absence of the vendor’s call.

This summer, the streets of Delhi are desolate. “I am standing in my balcony, looking outside, and there is not one person out. Usually the colony is alive with people walking, kids shouting and horns [blaring],” says Sharma.

Across the city, in Nizamuddin, more than just a Covid-19 hotspot and the headquarters of the Tablighi Jamaat, Aamir, who lives in the basti and works as a guide, is learning to restrict his life to the confines of his small home with his wife, three children and other family members.

The restrictions are tougher here in the shadow of the Jamaat, despite the basti being Covid-free. It was an unusual shab-e-barat—the night of forgiveness. “We prayed all night,” he says. “Women prayed at a different time, as far away as they could,” he says. “Men went up to a terrace, if they had one, or did it at a different time.”

The soundtrack of neighbourhoods—a chorus of chatter, the whistle of a pressure cooker, clattering pans as they are dumped into sinks, children playing and shouting—has been muted. The bastis, mohallas and chawls are an intricate, tangled web of interaction. “The essence of good living is interaction,” says Saif Mahmood, lawyer and author of Beloved Delhi: A Mughal City and Her Greatest Poets. The writer has explored the Walled City—Shahjahanabad or Old Delhi—on foot, and points out that the design of Shahjahanabad, with its cramped galis, is such that no contact is impossible. In fact, it is actively encouraged. “It is one place where you can safely say your neighbour knows more about you,” he says.

For a country like India—where every experience is sensory, be it smell, touch, taste or sound—the loss of a connection with the world outside amid lockdown is unsettling. It is also deeply lonesome. “You will see community groups in trains. You find people hanging around the local paan wallah,” says Rajesh Parikh, a neuropsychiatrist. “College students will hang around in the canteen. We like hanging around.... To be consciously deprived of it will feel odd.”

Social distancing is a word that has no equivalent in India. Prime Minister Narendra Modi, fond of usually finding an Indianised version for everything, has been unable to find one for social distancing. It is also very much at odds with the image India has chosen to project abroad: Atithi Devo Bhava (The guest is God). The tagline of the tourism ministry, it has become the centre of Indian identity and certainly a measure for hospitality. Vasudhaiva Kutumbakam (the world is one family)—another favourite with the Modi government—means that shutting the doors is chafing against Indian ethos.

Social distancing is so much a foreign concept that chalk circles have been drawn for people to stand in while waiting in queues to shop. “Look at an Indian railway station,” says Parikh. “You will find that people tend to huddle around the centre rather than distribute themselves evenly across the platform. In terms of getting into the compartment or finding a place to sit, the latter makes more sense. That is what you tend to see in Europe or the US.” Social distancing, he says, is a “huge effort” for Indians. “We have to remind ourselves that I cannot go so close,” he says.

In India, interaction is not impersonal, including buying. Bargaining is steeped in the desi blood. It is about engagement and conversation, etiquette even, especially in bazaars. Cities in India, especially in the north, are designed around this interaction. Weekly bazaars are common. That is the first place that Delhi Chief Minister Arvind Kejriwal had to shut. The sudden disappearance of a way of life is not easy.

And, it holds true across India. Especially in Varanasi. “There is nothing impersonal in Varanasi,” says Hemang Agarwal, a designer. His days have lost the usual rhythm of interacting with weavers every two hours, of being outside the house and going to office. “It is a taste of retired life,” he says, laughing. Varanasi, which has been intrinsically tied with weaving, has felt the jolt of social distancing in its own way. “Every act of weaving is collaborative,” says Agarwal. “A master weaver has six to seven apprentices sitting with him.” All aspects of weaving, from untangling the thread to stretching it out, need more than one person.

One of the world’s most ancient cities, Varanasi might be the city of death, but it has always been throbbing with life. Today, the looms are silent, the ghats empty, the temples shut. “Varanasi is like an Indian wedding,” says Agarwal. “It has every colour conceivable. You never see the ghats empty. You can see the Statue of Liberty or the Taj Mahal in isolation. But there is not one image of the ghats of Varanasi without a single person.” Its now deserted avatar feels like a stranger. “It is not Varanasi,” says Agarwal. 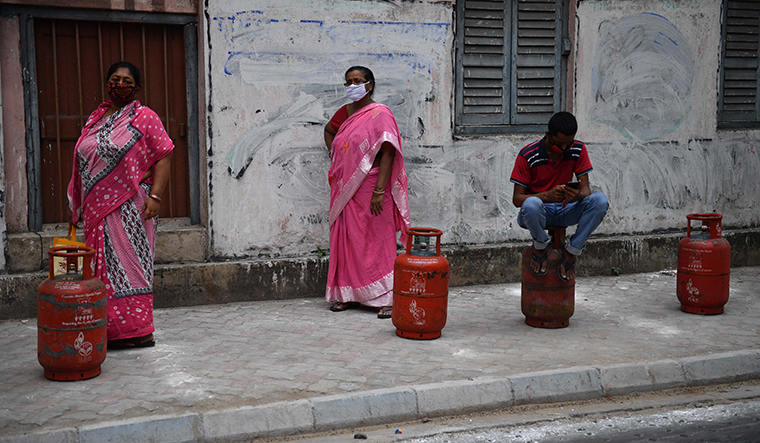 Mind the gap: People queue up to exchange their empty gas cylinders in Kolkata | Salil Bera

In Bhopal, sitting in a sprawling garden with mango trees, flowers and vegetables, Shubhra Chatterji has not heard a car honk since March 18. “You never realise how much you miss a sound, even if you do not like it, until it is gone,” she says. Chatterji has lived across India, and prior to the lockdown shuttled between Dehradun, where her husband works, and Mumbai, where she works. She is now staying with her mother who is a doctor. “In small-town India, because people have space and grow stuff, you always share. Even today my mother took tomatoes to hospital,” she says. “A bowl of food that you make is always sent to the neighbours. Especially, if you have made something nice on a regular basis, and not only around Diwali.” Chatterji has spent years researching food, and making shows on it. “Even in Mumbai, in buildings, you know exactly what is cooking in the neighbours’ house. You can smell the tarka (tempering). There is a sense of community,” says Chatterji, who goes by the handle @historywali on Twitter.

The feeling of community is very common in Kolkata. The para, or neighbourhood, is the version of the extended Bengali family. It is the soul of Kolkata, a city that still feels like a town. Anil Kuriakose Elias grew up in a para, very much a Bengali. The lockdown has left him feeling marooned. “I went to drop off stuff for my parents who live in the para I grew up in,” he says. “It was silent. The chai shop, where people did adda [loosely translated as hangout], was deserted. This was where everyone gathered to talk about politics and Sourav Ganguly’s cricket. But everyone is locked in. The camaraderie is missing. It is difficult.”

Ask Tejas Motwani, a lawyer who now spends his days on Zoom calls, what he misses most? “Chai,” he says. “Not from anywhere special. But I miss catching up with friends at a chai stall at the end of my day around 11:30pm.” Nothing special would be discussed, just ordinary stuff about the day gone by. But the lockdown has taken away this idea of normalcy.

Food is often synonymous with community in India. In a country where even strangers bring out food as a way to break the ice on trains, food becomes a metaphor. It is feasting, fasting, celebrations, comfort and certainly a way to cope with loss. “No one cooks for one in India,” says Asma Khan, who runs the Darjeeling Express restaurant in London. “You cook to share.” It is so ingrained that sharing tiffins in school becomes a part of friendships. “My daughter and her friends tried to have lunch together after their classes on Zoom for the first few days,” says Shweta Agarwal, who lives in Mumbai. “But they gave up in a week. It wasn’t the same if you couldn’t dip into anyone else’s box.’’

So, while video calls have become more frequent and families talk more often even if they are in the same city, the physicality of not seeing the person takes away the intimacy and the warmth of the meet-up. “It was my mother’s birthday [on April 10],” says Shweta. “She turned 70. I cried. She cried. Her friends were upset [for not being there with her].” Her daughter’s birthday was on April 13, and while she had her friends make a video for her to tide over not being there, Shweta spent most of her day feeling that something was missing.

Social distancing sure has taken an emotional toll on people. According to a Kaiser Family Foundation poll, 45 per cent of Americans say the pandemic has taken a toll on their mental health. In India, where ties of family are binding, it is worse.

While Shweta may feel adrift without the connection of her family, Pushpesh Pant, a political scientist, says we have always practised social distancing. The caste system based on purity ensured it. “Even at homes, it was practised against widows and menstruating women,” he says.

The politics of caste aside, social distancing has been hard especially for those who have lost family members. Aruni Kashyap, a writer from Assam who lives in the US, lost his brother recently. Unable to travel to India, Kashyap spent 13 days observing the rituals alone. “In this period, there have been births and deaths, and marriages postponed,” he says. “We heal only through the community.” Loss, in India, is always processed in a community. His father, who lives in rural Assam, was alone. But people came. “They maintained social distancing. Even food came from other houses,’’ says Kashyap. “There weren’t many, but they came.”