My father said no to Bapu Salt of defiance: Mahatma gandhi and his followers marching to Dandi in 1930 | Getty Images

ONE MORNING IN March 2005, the phone rang in my Bhopal home. The caller was Tushar Gandhi, a great-grandson of the Mahatma. “I want you to do what your father did long back. Do join us on our march to Dandi,” he said. I promised him that I would be there.

On reaching Sabarmati Ashram in Ahmedabad, I spotted my father’s name in The Dandi Marchers list there. I could feel the warmth of his presence in the ashram, and the stories he had told me came rushing back into my mind. My father, Theverthundiyil Titus, better known as Titusji, had lived there for five years. He was the only Christian among 81 salt satyagrahis who marched to Dandi 90 years ago.

Starting from Sabarmati on March 12, 1930, they had taken 25 days to walk 388km to the coastal village of Dandi, where they made salt on April 6. Re-enacting the historic march in 2005, we followed the same hallowed route they had taken.

At Dandi I recalled my father telling me how Mahatma Gandhi in his dhoti had waded into the Arabian sea and picked up a lump of salt, which he then sold to a rich Indian. His followers, including my father, boiled sea water in large vessels to make salt, thus breaking law. They were beaten with steel-studded police lathis, put in a goods train to Bombay and then taken by truck to Yerwada jail in Pune. Gandhiji was spared. He was, however, jailed after a month for instigating millions of others to break the salt law.

My father was 25 at that time. He was the fourth child of a small farmer of Maramon village in central Travancore. He joined a newly opened English medium school at class eight, and after his matriculation, became a teacher at another school 30km away at a handsome salary of 018 a month. On weekends, the 16-year-old teacher walked home through dense jungles, lighting his path with a candle burning in a coconut shell. Wild elephants mercifully ignored him.

After a few years he applied for an Indian Dairy Diploma course announced in 1924 by Allahabad Agricultural Institute (now University of Agriculture). The institute offered him a scholarship and free accommodation. He borrowed 0100 and went to Allahabad, changing trains at Madras and Bombay. In Bombay, a relative gave the dhoti-clad boy western dress to wear on campus. 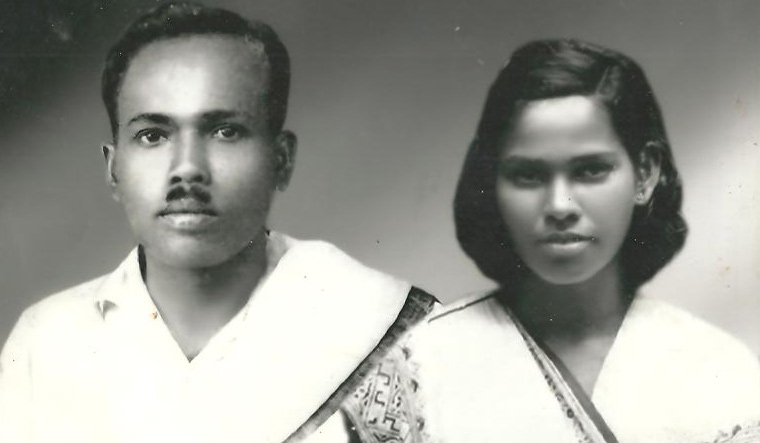 T. Titus and his wife, Annamma.

At the institute, he cut weeds on the huge campus, in return for food. He took the diploma in 1927, but unable to find a job, he did not vacate his hostel room. One night the principal, Dr Sam Higginbottom, knocked at his door. My father shivered, thinking that the principal had come to throw him out. Instead, the missionary from Manchester handed him a bunch of keys and said: “You are appointed manager of the institute’s dairy farm. Go and take charge right now.” The dairy manager had been found lying drunk on the road and summarily sacked.

My father was expert at pasteurising and chilling milk and at making curds, buttermilk, butter, ghee and different varieties of cheese (then consumed by the westerners only.) He worked there for two years and then joined a dairy in Gorakhpur.

His brother in Maramon told him about Gandhiji putting out an advertisement for a dairy expert in Sabarmati. My father applied and got an interview call. Bapu was working his charkha when the young man met him. He looked up once and said: “We have a dairy here with many cows. I want you to run it scientifically and cleanly. The cows have to be given a bath daily. The milk from the dairy is consumed by 200 inmates of the ashram. As long as you are here, you have to observe celibacy. Here even newly married couples sleep separately. Besides the dairy work, you have to help in the kitchen for two hours. Wash your clothes in the Sabarmati river. Clean all the latrines when your turn comes.” 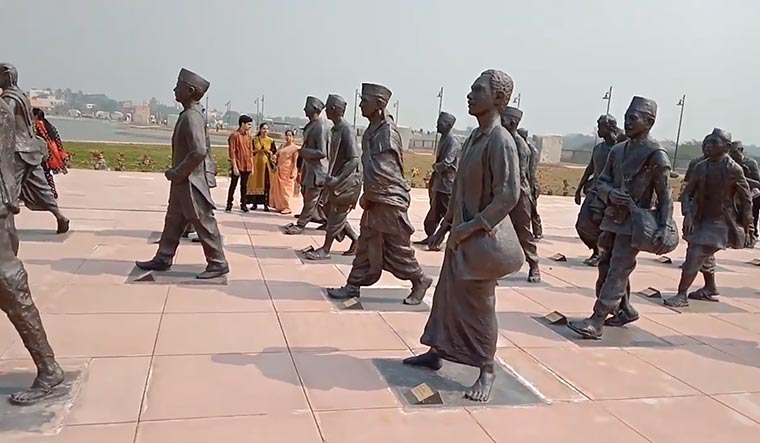 A moment to savour: statue of titus in the foreground with those of other dandi marchers at the national salt satyagraha memorial created by IIT Mumbai at Dandi.

Young Titus asked the most important question of his life: “Do I get any salary for my services here?”

Bapu explained: “In the ashram, the practice is that no one is big or small. All your expenses will be met from the common fund. You will get pure vegetarian food and khadi dress.”

“But I have an aged father in Kerala,” Titus protested. “I have to send him some money every month.”

“Leave his name and address with me,” said Bapu. “I will arrange for some money to be sent every month.” (Bapu sent five rupees to my grandfather every month.) “But remember this would be the most important decision of your life. And make sure to see the dairy before you leave.”

After a week, Titus sent an acceptance letter to Bapu and went off to Maramon to meet his relatives and break the news. He became a hero in central Travancore and started accepting invitations. He gorged on meat dishes of Kerala maybe for the last time. He joined Bapu on Diwali Day in 1929. There were oil lamps lighting up the area and songs and garba dances and sweets. A barber gave him a military haircut, after which he got khadi clothes, a charkha, a plate, a katori and a glass. Slowly he got used to the ashram’s austere ways. Bapu was happy with him. When Bapu visited Kerala in 1934, he called on my grandfather and assured him that Titus was doing well at Sabarmati and that he should not worry about him.

There were 50 or 60 women in the ashram working along with the men, but love affairs were forbidden. Once an old lady got hold of a love letter and handed it over to Bapu. He called a meeting and said: “These things are happening because of my sins. I will commit suicide if such activities are repeated.”

A few months later, a few children in the ashram were fatally afflicted with smallpox, yet Bapu refused to allow vaccination in the ashram as the vaccine is extracted from cows. So Titusji and others did not get themselves vaccinated.

After Sardar Patel was arrested and put in Sabarmati jail, Bapu told the male inmates of ashram that those who did not want to take part in the salt satyagraha could leave. Unlike the other salt satyagrahis, Titusji did not wear the Gandhi cap. When the matter was reported to Bapu, he remarked, “I don’t wear a cap, so I cannot force him to do so.”

After a few days of vigorous marching, Titusji’s feet were swollen and painful. He went to Bapu for a remedy. “Keep your legs in hot water and then keep them raised,” he was told. The treatment worked.

In 1934, Titusji went to Kerala and married beautiful Annamma, who was 12 years younger than him. When he returned to the ashram with the bride, Bapu (who was in Wardha) allowed him to use his room for some days. Annamma had four gold bangles and a gold necklace. “Give these to me,” Bapu demanded, pointing at the ornaments, on meeting her. She refused. But Titusji persuaded her to give them away. On another occasion Bapu asked her to clean the latrines, and she refused. Once again, Titusji made her obey Bapu.

After Annamma went back to Kerala, Titusji got a telegram from Bapu to meet him in Wardha. When he reached Wardha, Bapu asked him to identify some fertile land there to start a new dairy farm.

“This place is not fit for any dairy farm. It is all dry, parched land,” Titusji told him. But Bapu was adamant. “We have decided to start a dairy farm here,” he said. “And you have to work under Mirabehn.” She was standing next to Bapu, her tall frame wrapped in a white sari. Born Madeleine Slade, she was the daughter of a British rear admiral and had arrived in Sabarmati in 1925. There is a hut at Sabarmati Ashram named after her and another named after Vinoba Bhave.

Titusji could not comprehend it. How could someone who was thrown out of train by a white man in South Africa ask a dairy professional to work under a British novice!

“Sorry, Bapu,” said Titusji. “I am unable to obey you this time. I won’t work under her.”

“No, Bapu, you don’t trust me,” replied Titusji, with salty tears rolling down his cheeks. He left for Travancore not too long after, to be with Annamma. Like Bapu, his disciple was adamant, too.

The Gandhian influence on his life, however, remained undiminished even as he managed big dairies in Ooty, Pune, Delhi, Bhopal and Bhilai. In Bhopal in 1956, he was a gazetted officer in the agriculture department, training gram sevaks in dairying, veterinary service and farming. Yet he was perpetually short of money as he had seven children.

He told me stories of his life while living in Bhopal in the evening of his life. One day in August 1980, he went to his eldest daughter’s house 10km away, felt uneasy and died in hospital. He was diabetic and 75 years old. A few hours before his death, a cow in the household had walked into the drawing room at ten in the night—a strange omen marking the end of a dairyman who knew the Great Soul.