What Ranil Wickremesinghe needs to do 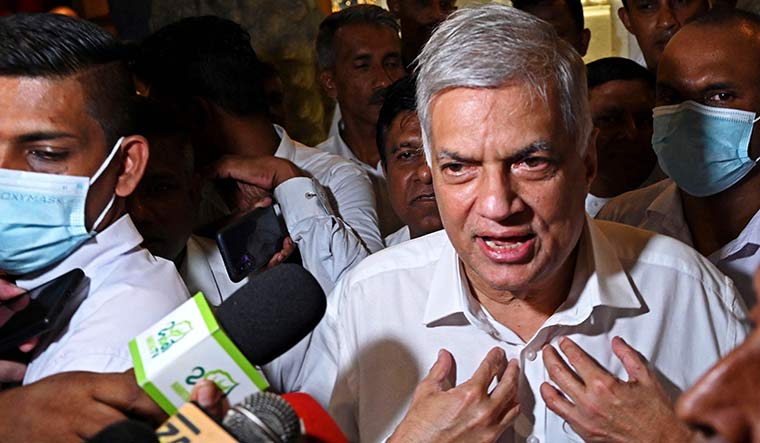 The redeemer: Ranil Wickremesinghe speaking to journalists after taking charge as president | AFP

THE SCENE WAS STRANGE. There were long queues on both sides of Ananda Coomaraswamy Mawatha, a usually bustling street close to the heart of Colombo, but oddly quiet now. On one side of the mawatha (which means street in Sinhalese) were hundreds of two-wheelers and luxury cars, parked bumper to bumper. On the other side was an equally long queue of autorickshaws.

The lines barely moved. Men in khaki, some of them resting on the doorsteps of a swanky bungalow, kept watch. “That one is mine,” said Dinouk Liyanage, an autorickshaw driver. “I have been here for two days to fill it up with petrol.”

Despite the long wait, Liyanage will get only 10 litres of petrol. “There is rationing,” he explained. “We don’t have sufficient fuel.” Ten litres will barely last two days, he added.

The long queues showed how acute the fuel shortage in Sri Lanka was. With no end in sight even after four months, the shortage is crippling the lives of the elite as well as the everyman.

Liyanage said his expenses have tripled, while his income has plunged. “I used to earn LKR 50,000 a month, and spend only LKR 40,000. I have now pawned all my wife’s jewellery. But there seems to be no way out,” he said.

He could as well have been describing the state of the economy. Ninety-five per cent of Sri Lanka’s 22 million people are reeling under an economic crisis, and the prolonged food, fuel and electricity shortages it has caused. Schools and colleges are shut; offices are plagued by power cuts; newspapers have ceased printing for want of ink and newsprint; and inadequate medical supplies have forced hospitals to postpone surgeries.

Worse, there still seems to be no way out of the mess. The Sri Lankan rupee has plummeted to LKR355 against the US dollar, from around LKR190 a year ago. Large industries like textile, tea and tourism have suffered, leading to a jobs crisis. Fallout of policy missteps like the fertiliser ban and tax cuts, and factors like the pandemic and the Russia-Ukraine war, have aggravated the crisis.

The government itself is impoverished. Sri Lanka had a debt-to-GDP ratio of 101 per cent in 2020, making its debt service payments (as a ratio to its paltry revenues) one of the highest in the world. “We have been living on borrowings,” said Ahilan Kadirgamar, political economist and senior lecturer at University of Jaffna. According to him, the crisis had been building up for the past five decades. 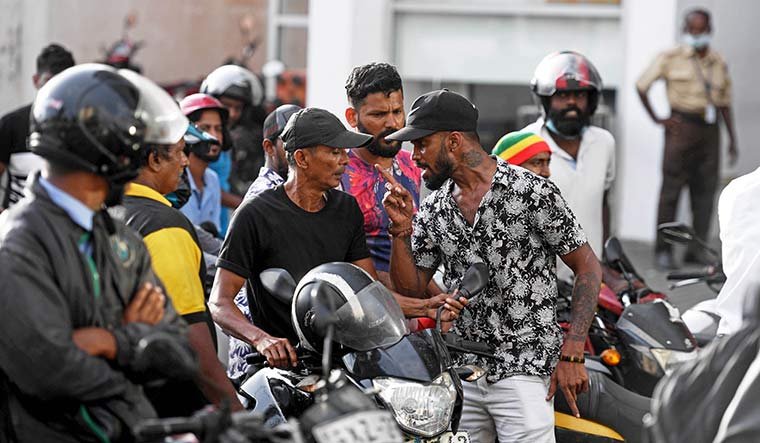 Anura Kulasekara would agree. A taxi driver who has fallen on hard times, Kulasekara has been making ends meet by selling samosas to anti-government protesters in Colombo. He remembers his father telling him how he survived a similar situation in the 1970s, when prime minister Sirimao Bandaranaike’s import restrictions plunged the country into a prolonged economic and political crisis. Bandaranaike, whose motto “Produce or Perish” was intended to make the country economically self-sufficient, failed so miserably that she lost the 1977 elections by a landslide. It was J.R. Jayawardene, the United National Party (UNP) leader who succeeded her, who rescued the economy and set it on a new path by opening up markets and attracting foreign investments.

Five decades of change, however, seems to have come full circle. Sri Lanka is in the throes of a deeper crisis, and Kulasekara is worse off than his father was in the 1970s. As fate would have it, the man chosen to lead the country out of the mess, President Ranil Wickeremesinghe, is Jayawardene’s nephew.

“Wickremesinghe is a neoliberal like is uncle Jayewardene was. He is pragmatic,” said Umesh Moramudali, senior lecturer of economics at the University of Colombo.

Wickremesinghe, 73, has taken over from Gotabaya Rajapaksa, who was forced to resign as president and flee the country after mass protests erupted in April. Gotabaya and his predecessor, his brother and former president Mahinda Rajapaksa, were right-wing nationalists who were ideologically opposed to the liberal-conservative UNP, but they had largely stuck to Jayawardene’s economic path when they were in power. Critics say it was their stress on debt-powered welfarism and rapid infrastructure growth that led to the current crisis.

“Patronage politics and resistance to privatisation was their policy,” said Sritharan Sivagnanam, Jaffna MP. “Mahinda, during his first term, said no to every multilateral loan that came his way, and chose only bilateral loans. This has led to the huge debt burden.” 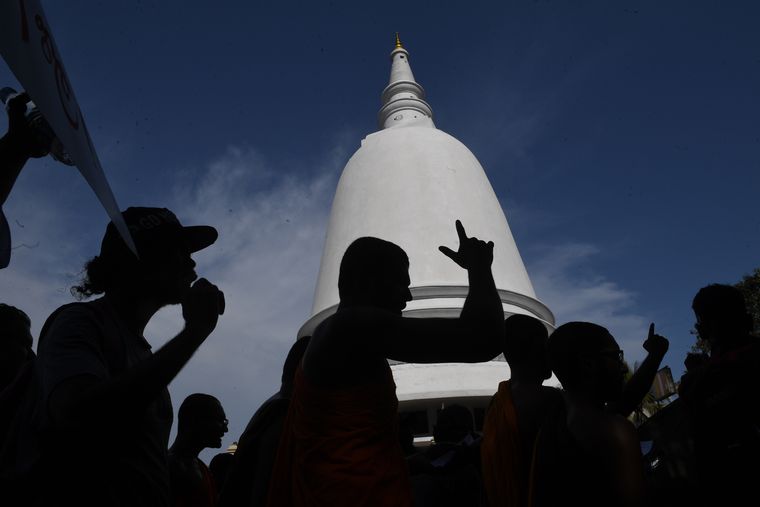 The fight goes on: A protest in front of the presidential secretariat in Colombo on July 19 | Bhanu Prakash Chandra

As president, Wickremesinghe has to lead an all-party government that faces the daunting task of resolving the debt crisis and restoring stability. A shrewd politician, he has largely kept Gotabaya’s cabinet intact, even as he chose longtime friend Dinesh Gunawardena as prime minister. “Our differences are over. We have to work together now,” he told the cabinet soon after taking charge.

Wickremesinghe can be at the helm for the rest of Gotabaya’s term, which ends in November 2024. It is a remarkable turnaround in fortunes for a leader who polled just around 30,000 votes in the 2019 parliamentary elections. His UNP had drawn a blank in 2019—its worst poll performance in history—and Wickremesinghe himself had to resort to the nomination route to become MP. The crisis, strangely, has revived the five-time prime minister’s flagging career.

“Ranil Wickremesinghe is finally where he wanted to be,” said an MP of the Samagi Jana Balawegaya. The SJB is an offshoot of the UNP, and it is led by former opposition leader Sajith Premadasa, who currently commands much of the support base that the UNP once had.

As a president vested with executive powers, Wickremesinghe has moved fast to consolidate his position. Within hours of taking oath, he managed to not just regain the UNP’s lost political ground, but also crush the anti-government protests. He has also revived his support base, caused rifts within the SJB, and is looking to catch the sizeable voter base of the Sri Lanka Podujana Peramuna, the party of the Rajapaksas. Having taken control of the finance and defence portfolios, Wickremesinghe is now in a much powerful position than the Rajapaksas, or even Jayawardene, ever were.

The challenge would be to preserve that power. With elections due in two years, Wickremesinghe will have to assuage public anger and find quick fixes to economic troubles. A recent World Bank report said Sri Lanka has more than five lakh new poor, and that seven of every 10 people in the country are forced to skip a meal every day. Inflation has skyrocketed—from 29.8 per cent in May to 54 per cent in June—and is set worsen if the new government fails to take immediate action.

The government needs to shore up revenues, but it faces several handicaps. The tourism industry, which accounted for more than 12 per cent of the GDP before the pandemic, and was a significant source of the country’s foreign exchange reserves, is in a shambles. The agriculture sector, which took a big beating because of Gotabaya’s misguided focus on organic farming, is just limping back to normal. It will take some time for Sri Lanka to reclaim its position as a rice exporter.

“It is a very long path [to recovery],” said Kopalapillai Amirthalingam, professor of economics at the University of Colombo. “Unless we restructure our debt, we may not be able to overcome the crisis.”

The situation calls for hard reforms—consolidating revenues, implementing hard-nosed monetary and fiscal policies, and remoulding the stagnant public sector. “Continuing some of the current policies, which have an anti-export bias, will have a serious impact on exports,” said K. Don Vimanga, policy analyst at Advocata Institute, a Colombo-based think tank.

Hard decisions need to be taken on the tax front as well. Economists say indirect taxes levied on goods and services benefit the rich at the expense of the poor. “The government imposing indirect taxes on food items, as a percentage of expenditure, hits the poor harder. Sri Lanka’s tax ratio is wrong; it enforces too many indirect taxes,” said Prof Rohan Samarajiva, chairman of the think-tank LIRNEasia in Colombo.

According to Moramudali, the government needs to increase revenue from direct taxes. “As the first step to get out of the crisis, the tax system should be simplified,” he said.

It means Sri Lanka needs a government that is both determined and diplomatic. As a politician of the old order who knows the nitty-gritty of parliamentary politics, Wickremesinghe could just be the right man for the job. Also, the UNP is a centre-right party that is a constituent of the International Democrat Union, an active coalition of prominent conservative political parties in more than 65 countries, including in the UK, Canada, France and Germany. This, and the fact that Wickremesinghe has his own channels to reach out to the west and Japan, could be of great help in restructuring Sri Lanka’s foreign debt. Also, from 2015 to 2019, when he was prime minister, Wickremesinghe had worked well with China, which has become a major lender to Sri Lanka.

The first priority on the debt front would be to obtain a bailout package from the International Monetary Front. IMF packages often come with strings attached, though. Sri Lanka could be in a spot if it is asked to restructure all its external debts—including the bilateral deals struck by the Rajapaksas. The share of Chinese loans in external debt, for instance, could be higher than what the Sri Lankan government acknowledges. Renegotiating such loans can pose political problems.

But, with Wickremesinghe firmly in control, the talks with IMF would gain momentum. “We have presented our revised economic programme to the IMF,” Nandalal Weerasinghe, governor of the Central Bank of Sri Lanka told THE WEEK. “We could have reached a staff-level agreement, but that did not happen as we did not have a stable administration. Such an agreement depends on the new government’s approach and its policies.”

The central bank has set a target of five months to come out of the immediate crisis, provided that Wickremesinghe ensures political stability. “We have a clear programme for economic recovery,” said Weerasinghe. “I am sure Sri Lanka can come out of the crisis in the next five months if there is a stable administration.”

Although Wickremesinghe leads an all-party government, political stability would depend a great deal on how strong the opposition is. Premadasa had tried and failed to become president soon after the Gotabaya government imploded, but he now has a significant role to play as the voice of angry protesters. In the absence of a broad consensus on the governance programme, Premadasa will have to raise his voice when needed, and Wickremesinghe would do well to heed his rival’s protests, so that the new arrangement can work well.

Restoring political stability could be harder than fixing the economy. “The road to recovery is very hard,” said Kathirgamar. “It might take five to eight years for us to come out of the crisis.”