The movement may have only just begun 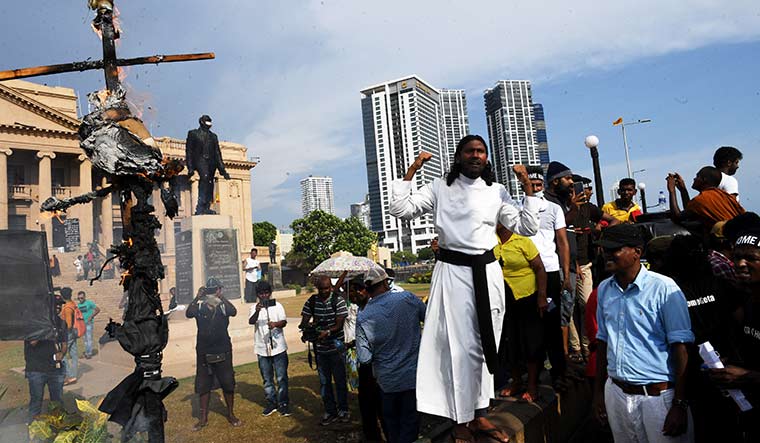 Man of faith, and force: Fr Amila Jeewantha Peiris speaks during a demonstration outside the president’s office in Colombo on July 19 | Bhanu Prakash Chandra

Angelo Kulasuriya was an angry man in 2010. Now he is furious, but also oddly elated.

The 38-year-old was a police inspector in Colombo from 2005 to 2010, when the civil war was at its peak and the writ of the Rajapaksas—president Mahinda and defence secretary Gotabaya—ran throughout Sri Lanka. The Rajapaksas had come to power riding on the anger of people like Angelo, who had for long wanted the decades-long insurgency to end. The Rajapaksas were finally stamping it out, and Angelo thought highly of their determined efforts to unite the country.

Then came rumours of human rights violations during the war. Angelo’s sense of unease grew, and in 2010, when the rumours became widespread allegations, he quit his job. He remained, though, a fanboy of the Rajapaksas. In the 2019 parliamentary elections, he voted for the Gotabaya-Mahinda campaign.

Today, though, Angelo sees the Rajapaksas in a starkly different light. “Now I regret voting for them,” he said. “The problem is not Gotabaya, but the decisions he made as president that ruined the country.”

When THE WEEK met him, Angelo was on a podium in front of the presidential secretariat in Colombo, delivering an impassioned speech to a crowd of anti-government protesters. “Go home, Gota,” he shouted, and the crowd repeated the slogan, waving the lion flag.

Gota has gone, of course. He was forced to step down as president on July 14, months after mass protests broke out against his government. Called the Aragalaya movement (aragalaya means struggle in Sinhalese), the widespread agitation forced Gotabaya to flee to the Maldives, and later to Singapore.

Mahinda, too, resigned as prime minister. The other prominent Rajapakasas in the Gotabaya government—brothers Basil and Chamal, and Mahinda’s son Namal—have all quit. The Rajapaksas no longer wield any influence in governance.

On July 21, Ranil Wickremesinghe of the United National Party was elected as the new president. A long-time rival of the Rajapaksas, Wickremesinghe will lead an all-party government that will serve the remainder of Gotabaya’s term, which ends in November 2024.

Soon after taking charge, Wickremesinghe cracked down on protesters at Gota Go Gama, the makeshift village in Colombo were they were camping. Many of them were injured during the crackdown, which had rival politicians accusing Wickremesinghe of being iron-fisted. “Wickremesinghe is no different from the Rajapaksas,” said Kasun Gunatilake, a protester. “He is a friend who has come to save them. The Rajapaksas will not be prosecuted for their wrongdoings.” 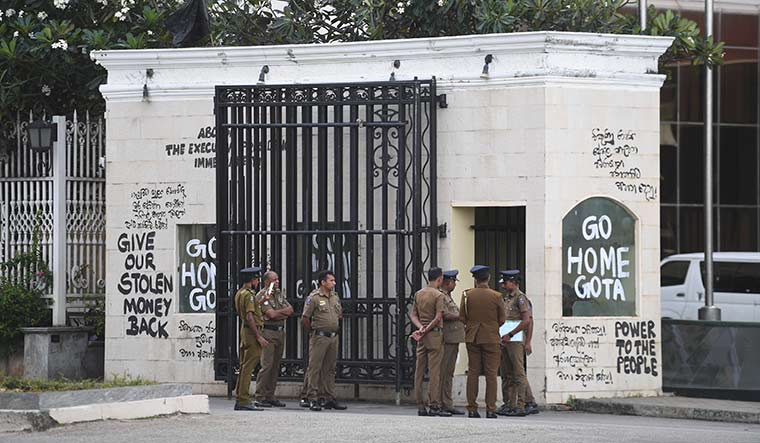 Rage of the people: The police guarding the president’s residence in Colombo after it was stormed by protesters | Bhanu Prakash Chandra

The Aragalaya movement, which has already brought about a sea change in politics, may have only just begun. “We are a bunch of peaceful protesters, looking to change the governing system in Sri Lanka,” said Angelo. “Yes, we made Gota go. We are now fighting the system, not the rulers. There should be a systemic change, so that our country belongs to every citizen—be it Sinhala, Tamil or Muslim.”

As it happened, it was farmers who sowed the seeds of the Aragalaya movement last year. They were protesting Gotabaya’s ban on chemical fertilisers to promote organic farming, which had led to a steep fall in production and revenues. Around the same time, Tamil activists and politicians had taken out a rally from Pottuvil in the east to Polikandy in the north. The two agitations were the first signs that Gotabaya was not the able administrator that he was believed to be.

In late February, supermarket shelves began running out of essential items. By early March, people were waiting in long queues to buy food and fuel. Power cuts began in late March, and school exams were cancelled because paper was on short supply. As disruptions began affecting livelihoods, people gradually began hitting the streets. Groups were formed and random demonstrations were held. As Gotabaya refused to step down and the government continued to mishandle the economic crisis, the groups coalesced to form the Aragalaya movement.

“[The movement has] close to 50 organisations,” said Chameera Dedduwage, a digital marketing strategist who joined the protests in March. “Meeting were held regularly to make decisions, structure the protests, and give direction to Aragalaya. The core committee has around 100 people from different sections of society.”

Galle Face, a seaside locality in Colombo, became a centre of protests. People from all walks of life—teachers, students, artists, lawyers, retired government employees and police personnel—began coming together. A silent vigil was held on March 1. 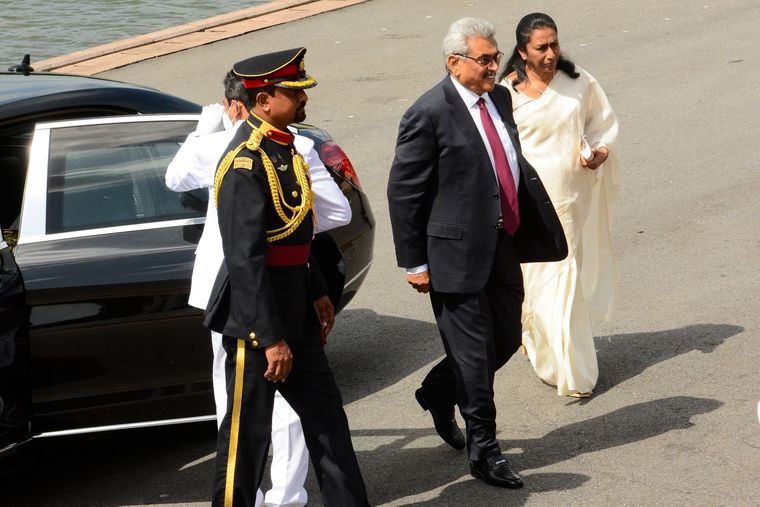 Smile before the storm: Gotabaya Rajapaksa and his wife, Ioma, in August 2020 | Getty Images

Social media helped accelerate the churn. In April, a group of likeminded netizens came together to organise protest gatherings. One of them, a law student called Buddhi Prabodha Karunaratna, called for a demonstration on March 28 in front of the Velum Pokuna Mahinda Rajapaksa Theatre, a performing arts hub in Colombo. “Those who don’t protest are not patriotic,” he wrote on Facebook.

The response was overwhelming. Around 400 people turned up in front of the theatre. Two days later, the group joined a bigger demonstration in front of Gotabaya’s private residence at Mirihana. Gotabaya was forced to vacate his home that day.

The social media group, christened Black Caps by a lecturer called Hemapriya Kaviratna, soon became a major force in the larger Aragalaya movement. “We never had an organisation until April 9,” said Buddhi, who is now a Black Caps spokesperson.

A turning point in the movement came on April 9, when a million protesters from across the country marched to Galle Face. Black Caps had urged people to gather in Colombo and stay put until Gotabaya resigned. “This worked and Gota Go Gama came into existence,” said Buddhi. Tents were erected at Galle Face Green, an iconic seaside field in Colombo, and protesters began gathering at the makeshift village. Gota Go Gama also became a venue to celebrate Easter, and Tamil and Sinhala New Year’s Day.

Several coordination groups were soon formed—for arranging meetings, ensuring food and water supply, keeping records, taking care of logistics, and liaising with the media. “Our survival was the synergy to work. This made people stay back at Gota Go Gama,” said Chameera.

Artiste Asanga Saya Kara set up an open air theatre. More than 2,000 artistes—actors, puppeteers, writers, drummers, dancers and camerapersons—began taking part in the events. A group of theatre artistes wrapped themselves in large fertiliser bags and marched silently through Colombo, symbolising how the ban on fertilisers affected farmers.

Filmmaker King Ratnam, who made Sri Lanka’s first Tamil film, held story sessions that made the Sinhalese understand the pain of minority communities. The positive response to the sessions made an increasing number of Tamils join Gota Go Gama. “We are apolitical. We are not linked to any political party,” said Peter Dialmeida, a theatre artiste.

Religious groups also became part of the village. Fr Amila Jeewantha Peiris, a 45-year-old Catholic priest who had been working to improve the lives of plantation workers in Sabaragamuva province, came to Gota Go Gama and began an interfaith campaign to attract various religious communities to take part in the protests.“My people were dying of hunger. They were becoming the poorest of the poor. This prompted me to give a structural change to Aragalaya,” Jeewantha said.

Jeewantha received help from Koswatte Mahanama Thero, a Buddhist monk of the monastic order Amarapura Nikaya, who told conservative Sinhala Buddhists that protesting for their rights was not wrong. Hundreds of Buddhist monks heeded his call.

But why would a Buddhist monk oppose the Rajapaksas, who were staunch Buddhists themselves? “They don’t live by the precepts of Buddhism,” said Thero. “They stole public wealth. They are liars. Stealing and lying are against the principles of Buddhism.”

University students played a key role in synergising the movement’s various strands. “The youth are the most affected people in Sri Lanka,” said Lahiru Weerasekara of the Youth for Change movement. “We don’t have jobs, and our schools and colleges are closed. Our education is hanging in the balance. We can only raise our voice through protests.”

The Aragalaya movement has succeeded in ousting the Rajapaksas from power, but perhaps its greatest success has been in giving the Sinhalese a sense of the Tamil pain. Once, during a protest gathering, a government helicopter flew threateningly low over Gota Go Gama. The huge uproar it caused was followed by a sombre realisation. “That,” said Budhi, “is when we understood, and talked among ourselves, about how our fellow citizens in the north would have suffered.”