Nearly a lakh people have been reported missing since the 1980s 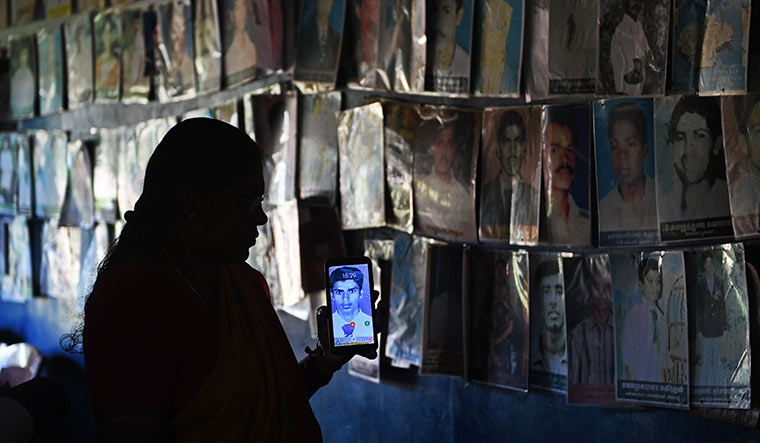 Agonising wait: Kokilavani with a photograph of her missing son, Kowrishankar, at the office of the Mothers of the Disappeared in Kilinochchi | Bhanu Prakash Chandra

TEARS STREAM DOWN the face of Kokilavani Kathirkamanathan, 52, as she walks into the one-room office of the Mothers of the Disappeared in Kilinochchi, in Sri Lanka’s Northern Province. She looks disconsolately at the long banner placed in the room with photographs of those who went missing after the civil war ended in 2009. Kokilavani is accompanied by her neighbour Kalavathy Krishnankutty, who distributes vibhuti (sacred ash) to the other women gathered in the room. Kokilavani, Kalavathy and others continue to wait for their sons and daughters who were either forcibly taken away by the Sri Lankan army or voluntarily surrendered after the war.

“Now the Sinhala youth are protesting in Colombo and the police and the army are silent. But whenever we protest for our missing children, we are harassed,” said Kokilavani. Sitting next to her is Thanapackiam Sadhananthan, whose son, Sivakumar, surrendered to the army. “He was just 20 and the army promised that he would be let off after an inquiry,” said the 64-year-old. “Anyhow, imagine the plight of the mothers who handed over their daughters to the army. In my case, it is my son who is missing,” she said.

Sivakumar, who was working as a salesman in a textile shop, joined the LTTE towards the end of the war. Those days, the LTTE used to forcibly conscript one person from each Tamil family. “I went to the Criminal Investigation Department (CID) office in Colombo and to the Vavuniya army camp looking for my son. If he comes back, he will take care of his sister,” she said. Thanapackiam’s daughter became mentally ill after the family’s efforts to get Sivakumar back failed.

Kokilavani handed over her son, Kowrishankar, to the army at the Omanthai camp in Vavuniya, a day after the war got over. “I have not heard a word about him since then,” said Kokilavani. Kalavathy, who lived in Tamil Nadu as a refugee till 2004, returned to Sri Lanka only to be with her son, Sukumaran, who had joined the LTTE. “He had lost his leg, fighting the army. I came back and got him married. When the war ended, I handed over Sukumaran and his wife, Karunadevi, to the army. I thought they would be released after inquiry,” said Kalavathy. “I returned to my motherland to live with my children. But the war tore apart our lives once again.” 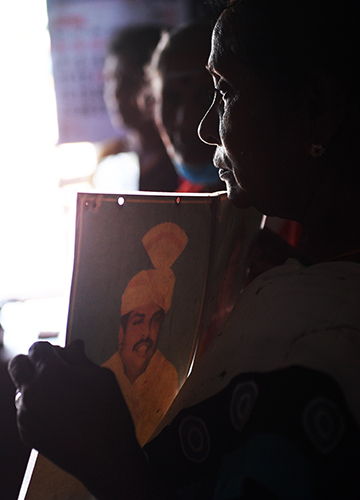 Sri Lanka has one of the world’s highest number of enforced disappearances. According to Amnesty International, nearly a lakh people have been reported missing since the 1980s. The numbers went up drastically towards the end of the civil war, with at least 40,000 people going missing. And the cases continue to pile up, even now. Manikkam Jeyakumar, who served as development officer at the Kopai divisional secretariat in Jaffna, went missing last September. He once headed the financial division of the LTTE’s political wing. A few days later, his body was found floating in a well.

All the missing people, however, are not LTTE fighters or sympathisers. Colombo-based cartoonist Prageeth Eknaligoda went missing after leaving the premises of Lanka E-news, a news website based in Colombo. His wife, Sandhya, fears that he is unlikely to return. “Not a single day has passed without me thinking of Prageeth,” said Sandhya, pointing to the powerful political cartoons hanging in their house.

On January 17, 2020, President Gotabaya Rajapaksa met with Hanaa Singer, the United Nations Resident Coordinator for Sri Lanka, to discuss the disappearances. A statement released by the president’s office after the meeting said the missing persons were no longer alive: “Most of them had been taken by the LTTE or forcibly conscripted. The families of the missing attest to it. However, they do not know what has become of them and so they claim them to be missing.” It came as rude shock for tens of thousands of people who were hoping that their sons and daughters were still alive.

“I don’t believe that my son is dead,” said 69-year-old Leela Devi Ananda Natarajah from Kodikamam near Jaffna. Her son, Anurajah, who was with the communications division of the Sea Tigers, was forced to surrender to the army on May 15, 2009, two days before the end of the war. Leela Devi, who served in the Sri Lankan government’s labour department, searched for him in many places, including the Vavuniya camp. “I even went to the sixth floor prison at the CID office in Colombo.” But she never got any news about her son.

Gotabaya said his government would issue death certificates to the missing persons. Their families were reportedly offered LKR one lakh as compensation. But the decision was met with widespread disapproval. “Is my son worth just one lakh rupees? Who wants this money? The army promised that he would be sent back after inquiry. Did I give away my son for this money and a death certificate?” asked Ranjana Prabhakaran from Mullaitivu district. Her son, Sugeharan, was taken away in 2009. “Once in 2014, officers from the Terrorist Information Department came calling for me, saying that my son was in Colombo. I was summoned to Kilinochchi for an inquiry. But nothing happened after that,” said Ranjana.

Amnesty International said families of those who participated in demonstrations seeking justice for their loved ones were facing harassment, torture and repeated interrogation. “Their protests are photographed and recorded, and they are harassed with repeated phone calls and incessant questioning,” said an Amnesty report. “The authorities now seek pre-emptive court orders against key activists who demand truth and justice for those who have disappeared.”