India moves to utilise Lakshadweep’s strategic location, but security is a challenge 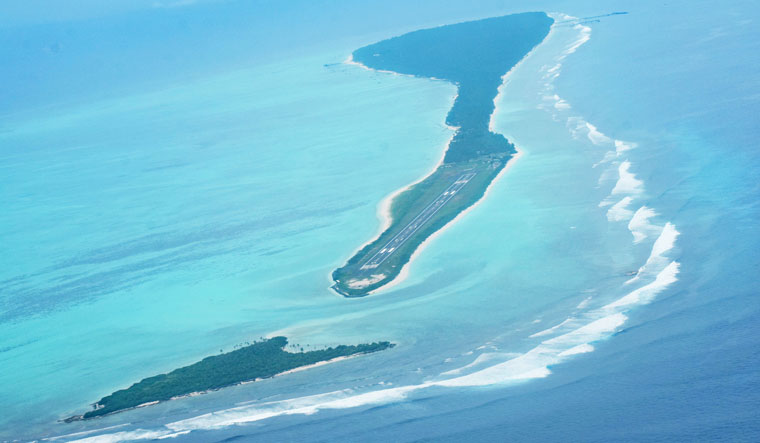 On April 7, 2021, the USS John Paul Jones, a guided-missile destroyer, passed just off the coast of Lakshadweep. It was on a freedom of navigation operation of the US navy. But it was in India’s exclusive economic zone (EEZ)—an area in which a sovereign state has special rights to explore and use marine resources. India responded strongly.

It said that the United Nations Convention on the Law of the Sea “does not authorise” passage of ships with weapons or explosives without the consent of the coastal state. India's reaction was apt and understandable, but the "unauthorised" movement of a US warship close to Indian waters also highlighted something else. The proximity to Lakshadweep was indicative of the strategic importance of the archipelago.

Of Lakshadweep's 36 islands, only 10 are inhabited. The population is estimated to be around 73,000 (2020 UIDAI projection). But Lakshadweep gives India 20,000sqkm of territorial waters and 4,00,000sqkm of EEZ. It is close to the Nine Degree Channel; 12 ships cross this channel every minute. But, probably because of the limited land area—32sqkm—Lakshadweep lacks adequate infrastructure.

For years, it got only a small military detachment and electronic surveillance. Now, Indian military planners are starting to believe that it can be used to counter China's growing influence in neighbouring nations like the Maldives, Mauritius, Seychelles, Sri Lanka, Pakistan and Myanmar. China is building a port city in Sri Lanka, around 300km from India. Similarly, it controls several islands in the Maldives and is building an airport there.

Besides surveillance, these detachments work as observance and reporting organisations. And, there are plans for a fully operational navy base in Lakshadweep. A bigger facility on Minicoy is also under consideration, because of its proximity to the Maldives (71 nautical miles).

The Andaman and Nicobar islands in the east and Lakshadweep in the west are getting renewed attention, as the ministry of defence and the national security council secretariat are constantly in touch with the Island Development Agency. (The IDA was set up in June 2017 to oversee the development of 1,382 identified offshore islands of India.)

Multiple efforts are on to develop Lakshadweep’s defence capabilities. The Navy is working in tandem with the civil administration to extend the Agatti airstrip to 3,200m (from 1,000m) to accommodate larger aircraft. A longer runway would take the Navy’s Boeing P-8I Poseidon long-range maritime reconnaissance aircraft; the squadron—INAS 312, nicknamed The Albatrosses—is currently based at INS Rajali in Arakkonam, Tamil Nadu. Experts say that the P-8I taking off from Agatti will have longer legs in the Indian Ocean region, enabling it to reach as far as South Africa. The Indian Air Force, too, has, plans for Lakshadweep.

At present, Lakshadweep is under the Southern Naval Command, based in Kochi, Kerala. But, once the Karwar Naval Base (Project Seabird, which Defence Minister Rajnath Singh visited on June 24 to take stock of the progress) becomes fully active, the archipelago will be handled from there. This may result in Lakshadweep getting a more important role in India's military strategy. Phase-II of the Karwar project, which will be the biggest naval base east of the Suez Canal and a major part of India's power projection, is scheduled to be completed by the end of next year.

Indian maritime agencies are keeping a close eye on the Nine Degree Channel, which separates Minicoy island from the main Lakshadweep archipelago. The channel is used by all merchantmen shuttling to and from Europe, the Middle East and western Asia, and south east Asia and the far east. In wartime, India can block the channel and cut enemy supply lines.

Rear Admiral Sudarshan Y. Shrikhande (retired), who served as chief of staff in the Southern Naval Command, said: “Any capability enhancement helps Indian security establishment against all [potential] adversaries, including China.” However, he added that the volume of narcotics seizures in Indian waters was a big challenge. “[Indian waters have] become a conduit for global narcotics trade,” he said. Prabhakaran Paleri, former director general of the coast guard, said that protecting inhabited islands posed a different kind of challenge, as they can be used for trafficking of arms, drugs and people.

In India, coastal security received close attention after the 26/11 Mumbai terror attack. It was pointed out that terror outfits could pose a security challenge if Lakshadweep was not secured. Intelligence agencies even warned that Pakistan-based terror outfit Lashkar-e-Taiba could utilise uninhabited islands in Lakshadweep as a base to attack mainland India.

The archipelago’s proximity to the Maldives is seen as an additional concern. Security agencies believe that Lakshadweep's predominantly Muslim population (over 90 per cent) offer easy pickings for Maldivian fundamentalist outfits. Lieutenant Colonel M.P. Habibullah (retired), a native of Androth and the first Army officer from Lakshadweep, said that growing fundamentalism in the Maldives posed a threat. “The recent bomb attack on former Maldives president Mohamed Nasheed indicates the ingression of radical groups,” he said. “[The highest] percentage of jihadi recruits from south Asian nations to the ISIS have been from the Maldives.”