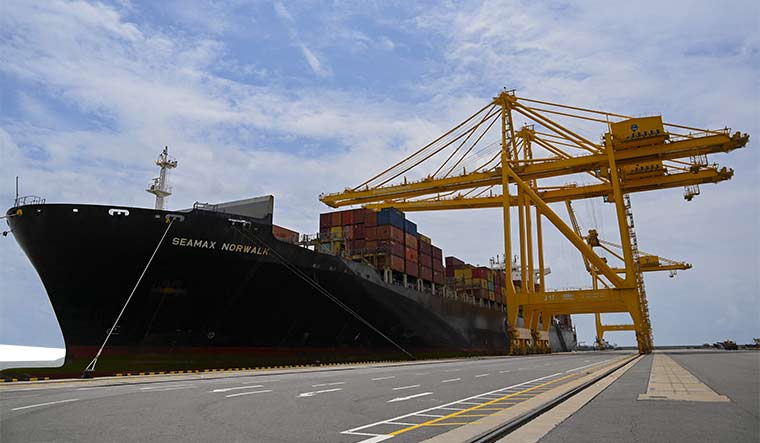 On May 20, the Sri Lankan parliament approved the Colombo Port City Economic Commission Bill with the support of 149 legislators in the 225-member house. While Sinhala parliamentarians voted overwhelmingly in support, opposition came from Tamil MPs, who said the bill compromised Sri Lanka’s sovereignty and could turn the country into a Chinese colony because of the preferential clauses included in it. The Port City, which will be Sri Lanka's first special economic zone for services-oriented industries, will be built by a Chinese company on 269 hectares (about 665 acres) of land reclaimed off the Colombo coast. It is financed by China as part of its Belt and Road Initiative (BRI).

With domestic and international opposition against the project intensifying, three cabinet ministers—Ali Sabry, G.L. Peiris and Ajith Nivard Cabraal—addressed a webinar organised by the Sri Lankan information department on May 28 to defend the Port City. They said the project was “fully Sri Lankan” and solicited foreign direct investment for its development. “Sri Lanka is non-aligned and that is our pride as a nation. We are friends of all and open for business with the entire world,” said Sabry. Peiris said the venture was completely transparent and that there was “no exclusivity” in Sri Lanka’s relationship with any one country, in an apparent reference to China.

The reclamation of 269 hectares for the project was done by the China Harbour Engineering Company at a cost of $1.4 billion and was completed by January 2019. According to a report by PricewaterhouseCoopers, the entire project will be completed by 2041. But real estate development, including commercial, financial, hospitality, residential and social infrastructure, is being accelerated. The PwC report estimated that the project would create more than two lakh jobs and would contribute around $11.8 billion to Sri Lanka’s GDP per annum.

While the government led by President Gotabaya Rajapaksa and Prime Minister Mahinda Rajapaksa claim that the project will be a big boon to the Sri Lankan economy, the opposition to the project is largely because of Chinese involvement. Launched in September 2014 when Mahinda was president, the project, which was halted briefly, is now back on track with the Rajapaksas back in power after a four-year break. This will be the third major infrastructure project in Sri Lanka after the Hambantota Port and the Colombo International Container Terminal (CICT) which is financed by China under BRI.

The growing Chinese presence has alarmed civil society groups, which have raised objections about the manner in which the governance of the project is envisaged. The bill allows the president to appoint a commission to govern the Port City. The commission enjoys absolute power in matters of governance, but there is not much accountability and oversight. Moreover, even foreigners can be appointed members of the commission. The bill also enables businesses to use any recognised foreign currency within the Port City. Critics, therefore, argue that it could turn into a Chinese enclave in future.

As many as 19 petitions were filed against the bill in the supreme court. Some of them opposed the provisions to appoint foreigners to the commission, while others challenged the provision to grant the Port City exemption from several tax and labour laws, giving the Chinese paymasters a major say in its day-to-day running and in matters of arbitration. After the court ruled that some provisions of the bill were “inconsistent” with the constitution, the government introduced a few amendments and got the bill passed.

The project also faced opposition from environmentalists and fisherfolk who said it would affect marine life. But those protests fizzled out in the absence of political support.

“There was no opposition as such in the parliament against the bill, except from a section of the Tamil parties,” said N. Sathiyamoorthy, distinguished fellow at Observer Research Foundation, Chennai. “All the Sinhala parties stood united and the bill was passed. The concern now is that the bill allows backdoor entry for China.”

The Chinese influence is growing at a steady pace in Sri Lanka. Chinese control of the Hambantota Port and the CICT has already altered the geostrategic profile of Sri Lanka’s western and southern coasts. The Port City now joins the list. “Given the fact that China [took away] a piece of our country 13 years ago [with the Hambantota project], this cannot be seen as just an investment project. A hegemonic rivalry is likely to be played out through these projects as China is establishing its presence at [another] strategic geographic corner of the Indian periphery,” said Nilanthan, a Jaffna-based political analyst and blogger.

Sri Lanka’s geopolitical dynamics has a direct impact on Indian foreign and security policies, which have failed to keep in check the growing Chinese influence. Although Gotabaya has promised that “no one will be allowed to jeopardise the security of India,” he seems to be getting increasingly shackled by China's rapidly growing economic and strategic might.

China's increasing influence in India's backyard is turning out to be a nightmare, strategically and economically. “It will help China eavesdrop in cyberspace,” said Colonel (retd) R. Hariharan, who served as the head of intelligence of the Indian Peace Keeping Force in Sri Lanka. India, along with Japan, has already lost the contract to develop the strategic East Container Terminal (ECT) at the Colombo Port, allegedly under Chinese pressure. India is also wary about the growing delay in approval for starting the development of the upper tank farm in Trincomalee, which is part of a longstanding India-Sri Lanka strategic initiative.

Over the past few years, India’s relations with its neighbours such as Nepal, Maldives, Bhutan, Bangladesh and Myanmar have run into rough weather. It will, therefore, want to tread cautiously on the issue and avoid ceding further space to China