Will work to restart the Sino-Tibetan dialogue 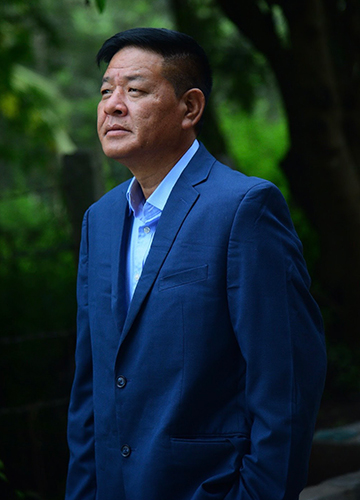 PENPA TSERING, the newly elected president of the Central Tibetan Administration (CTA)—known earlier as the Tibetan government in exile—has plans to approach the Chinese government to facilitate the visit of the Dalai Lama to China. The 14th Dalai Lama, who turns 86 this year, has expressed his desire to visit China. If the attempt is successful, it will be his first trip to China since he fled Lhasa in 1959, following the failed uprising against Beijing.

“I want to take up the matter with the Chinese government through various channels,” said Tsering, in an exclusive interview with THE WEEK. At a time when China continues to make territorial advances across the Himalayan region, Tsering hopes to bring Beijing to the negotiating table with the representative of the Dalai Lama for the resolution of the Sino-Tibetan conflict.

Q/ As the newly elected president of the CTA, what are your priorities?

A/ A key priority is the resolution of the Sino-Tibetan conflict. Keeping in mind the international situation and the political dynamics, we will have to study the issue more closely and come out with the right strategy. We also have to make good use of all the opportunities that come our way. All this can be achieved by abiding by the wishes of the Dalai Lama. All Tibetans who voted for me would like to follow the guidelines he has set for the betterment of the Tibetan population.

Q/ What is the first step towards resolving the Sino-Tibetan conflict?

A/ There have been no formal talks between the Chinese government and the representative of the Dalai Lama since 2010. From 2002 to 2010, we had nine rounds of discussions, including one round of informal talks, but there has been no forward movement since 2010. My aim is to make some progress in resuming the dialogue. China does not recognise the CTA. The talks have always been held between China and the representative of the Dalai Lama.

Q/ China’s aggressive territorial posturing in the Himalayan region may come in the way of resumption of talks.

A/ China claims that Tibet is an integral part of it. China has adopted this public posture to deny legitimacy to the demands of the Tibetan people. Despite this, we have been making efforts at different levels to resolve the Sino-Tibetan conflict. Other than working for the rights of the exiled community, we want to represent the true condition of Tibetans inside Tibet and draw international attention to the Chinese policies that are aimed at destroying their identity.

[We also want to draw attention to] the dangers posed by mass migration of the Chinese to the Tibetan plateau and [the ensuing] threats to the language, religious freedom and environment of the Tibetans. My attempt will be to gather evidence in the form of data and records to prove the threat from Chinese policy in the Tibetan plateau. We will also study the policy being implemented there today so that we can represent their concerns through the ambassadors and write open letters to draw attention of the political leadership in China and tell them that it is not benefiting the Tibetan people and there is an urgent need for change.

Q/ How is the support from India?

A/ We have got tremendous support from India and we will continue to work closely with the Indian government.

Q/ Many Tibetans have left India and have become citizens of other countries.

A/ We have a lot of potential in the form of a young population that is living in at least 25 countries, as citizens, working professionals and students, who can be roped in to work for the rights of the Tibetans. I plan to create a Tibetan advocacy group to recruit young Tibetans, including those who live in different countries, who will spend a few weeks a year doing lobbying. This move will add value to the ongoing efforts of our administration’s department of international relations. The Chinese government should know that Tibetans are working very hard to prevent China from sidestepping the issue.

Q/ Does the Dalai Lama still wish to travel to China?

A/ Yes, the Dalai Lama wishes to travel to China. I want to take up the matter with the Chinese government through various channels so that his holiness can visit China.

Q/ The CTA has been getting a lot of support from the United States recently.

A/ The US has been lending significant support to the Tibetan community. It has recently amended its 2002 Tibet Policy Act to help Tibetans preserve their identity as people in exile and in Tibet. During the tenure of former president Barack Obama, there was support for the cause and we are looking forward to more support from the Biden administration. Speaker Nancy Pelosi is a close friend of the Dalai Lama and we have good support from both Democrats and Republicans in the US Congress.

Q/ There are many Tibetans who demand independence from China. Will they be satisfied with the middle way approach?

A/ The middle way approach suggested by the Dalai Lama to resolve the Sino-Tibetan conflict is the official policy passed by the Tibetan parliament in exile. It will continue to be our guiding policy unless the parliament has a better alternative. There are demands by a section of the Tibetan people to make Tibet an independent nation, but no one has come up with a concrete plan for it. The Dalai Lama had said that if there were better options, they could always be discussed.

Q/ How do you plan to resolve the latest constitutional crisis that has hit the Tibetan government in exile?

A/ During the last session of the parliament, the chief justice commissioner and two justice commissioners of the Tibetan Supreme Justice Commission were impeached. A lot of concern is being voiced to restore their position. The parliament will have to meet to decide. A special session of parliament may be convened in May to end the crisis. It is the first time such a situation has occurred and we will take steps to ensure that it does not happen in future.